EHSANI2 @EHSANI22
, 16 tweets, 8 min read Read on Twitter
Tweet Share Email Embed
In order to truly understand the dynamic inside the #Syrian Armed Opposition, one must start to look into the ever closer marriage between the the Moslem Brotherhood and Nusra / al-Qaeda. Both have been joined at the hip through the sponsorship & support of #Qatar #Turkey ==>
2-Moslem Brotherhood (MB) lost its original military wing during the battle with the Syrian State in the 80’s. Best to think of Nusra/HTS/al-Qaeda in #Syria today as the new military wing of the M Brotherhood. One is the brain, the other represents arms & legs of the same body
3-The coordination between MB & Nusra/HTS/al-Qaeda has afforded the latter the chance to transform itself from non-state actor that had been hiding in the mountains of Afghanistan to an outfit with clear lines of communications to regional capitals that are supporting the MB
4-As one reads through Opposition accounts, it’s clear that #Saudi /#Qatar schism has had its effects on the landscape in #Syria . Jeish al-Islam which moved to Idlib from Ghouta from example is now fighting against dominance of MB/Nusra/HTS/al-Qaeda
5-Supporters of Jeish al Islam & their Sharia Sheikh (Samir Kaake) for example are seen here attacking media star Mousa al Omar for working with MB/Nusra/HTS/al-Qaeda & accusing him@of buying new home in #London for > 1 Million

6-For their part, so-called non al-Qaeda groups led by sheikhs like Samir Kaake of Douma are keeping themselves busy holding seminars to teach the reciting & memorizing of the Quran in places like al-Bab in northern #Aleppo

7-What is stunning about the current landscape in #Syria is how Western capitals are now crafting their policies on the notion that so long as one is not ISIS/al-Qaeda, one must consider all other remaining groups as legitimate/acceptable/kosher to do business with
8-Truth is that over the last 7 years, all and every armed group experienced constantly shifting alliances and partnerships. Jeish-Islam that once partnered with Nusra in Ghouta now fights against them over resources and money. Same goes for zangi and almost all others
9-Only the Syrian State knew from day one that it was fighting a single Umbrella with constantly moving parts underneath it. Every single group was after the same thing - Topple the State & become the new rulers of #Syria and start governing the country through true words of God
10-When the final history of the Syrian war will be written, it may well become obvious to all how the Moslem Brotherhood, that had been in a self-induced coma since the 1980’s saw its historic chance to wake up from the dead as the events in #Tunisia unfolded
11-Ever since early days of Daraa, Moslem Brotherhood (term is meant to broadly describe ideology that unites various groups & individuals) was going to do all & everything it can to wrest power from what they considered as Baathists/heretics/Alawis/Iran-supporting/non-believers
12-Of course there was non-Islamist resistance to Damascus that aspired for more democracy, human rights, political participation & less corruption. No doubt also that the State had long resisted such calls. Whether self-serving or not, Damascus knew this group had no chance v MB
13-The Idea that the day after the toppling of Assad & the State, “Syrians for more freedom & democracy” would somehow defeat and climb ahead of the “Syrian for ruling through Sharia & the words of God” is both not credible and perhaps even outright foolish. Why? ==>
14-Say what you want about them but MB/Nusra/HTS/al-Qaeda/Ahrar/Zangi/Jeish-Islam & others have sacrificed their blood. They own the guns. They have monopoly over interpreting the holy book. And what do the other Syrians have to offer? Secularism, freedom & democracy?

Really?
15-Think Tankers, #Syria Observers & Policy Makers (sorry here I go again), have been caught in typical case of group-think, wishful thinking & fear of losing their jobs if they dared go off script. They all wanted to believe that Syrians for freedom & democracy may/will prevail
16-Those who dared think differently than charted course have been branded Assadists

Here is a new definition of an Assadist:

Those who think that there has been near zero thought put into “The Day After” the toppling of the Syrian State. Think #Tutsis #Hutus Not #Milk #Honey
Missing some Tweet in this thread?
You can try to force a refresh.
Tweet Share Email Embed

More from @EHSANI22 see all

EHSANI2 @EHSANI22
Note how every regional & Western capital that supplied, trained & funded armed militants and insurgents in #Syria got a total pass. Not a single accountability for those actions over the past 7 years.
Suppose for a second that all the charges against Syrian the State are valid, are we to assume that Western capitals have the justification to fund, arm and train militants & insurgents in the next country whose actions they find deplorable?
Way regional & Western capitals justified their actions to add fuel to the fire in #Syria was made easier through the constant daily dehumanization of the state & its leadership.Practice of dehumanization of adversaries during conflicts is hardly new. It has long accompanied wars
Read 3 tweets

EHSANI2 @EHSANI22
In this era of income & wealth disparity, it is worth remembering that world’s richest man that ever lived was a Moslem Black African.

Meet Mansa Musa who owned all the Gold and Salt of the Mali Empire. He had made the legendary 2 year long 6,000 mile trip to Mecca

Mansa Musa had reportedly a net worth of $400 billion in today's money (three times that of Bill Gates). His journey to perform hajj went through Cairo where he spent so much of his Gold during his 3 months stay that he caused 25% drop in its price
Empire of Mali then was a massive half million sq miles. Within it, all the Gold was the personal property of Mansa (Emperor) Musa & anyone caught stealing it was quickly executed. Other than salt and gold, the Mansa made huge income form levying taxes on passing caravans
Read 5 tweets

EHSANI2 @EHSANI22
#Syria ‘s Opposition will long reflect on what went wrong. To this day, narrative has been that this was a peaceful uprising calling for freedom & democracy. In reality, only a handful pleaded & insisted on avoiding Any & All forms of an armed uprising regardless of reasons ==>
2-Coming on back of an Arab Spring fever sweeping the region, it was hard for Western capitals & media not to be intoxicated with the events. Indeed, so intoxicated & excited observers were that clear signs of radicalization & early violence by Opp were both ignored & dismissed
3-Historians will ultimately make the final determination about when the conflict turned into an armed insurgency. In the meantime & for this observer of the conflict, the events of Jisr al Shugour in early June 2011 (hardly 11 weeks post Daraa) mark an undisputed turning point
Read 11 tweets

Tim Hogan @TimInHonolulu
1, At this very moment perhaps several thousand Al-#Qaeda & #ISIS fighters are in the open near #Manbij threatening 🇺🇸 @USSOCOM. If @realDonaldTrump does not give orders to eliminate the people who attacked NYC @NancyPelosi should force an impeachment vote this week. #ORANGEISIS

2. Make the @GOP admit they are really traitors or, if not, willing to remove their own party's President. Whether motion passes or fails, the 116th @HouseJudiciary can bring impeachment articles. Make the 115th @GOP go on record as #AQ supporters. Then make them own it in 2020.
3. Trump and his pal @RT_Erdogan are supporting the ISIS AQ Jihadists. Teach the Manbij Jihadist force what being a US enemy means. @CENTCOM must unleash B-1 racks of SDBs for 12 hours of hell. Put Al-Qaeda and ISIS on the run.

Do it for New York. @NYPDCT @ChiefPentSpox
Read 3 tweets

Charles Lister @Charles_Lister
Preparations appear to be underway for a pro-#Assad offensive on #Idlib.

- The West must “re-assert” itself & protect civilians in NW #Syria & as a backstop, safe-routes should be opened for civilians to flee into #Turkey.

Via intermediary I got in touch with 3 European jihadists in Idlib. I sent my questions+fixer to Idlib.

The 3 foreign fighters in Idlib I got in touch with via intermediary are from Holland (2) &from Belgium (1).

@akhbar
3/ The foreign jihadists in Idlib answered my questions in Dutch &Flemish. They also know Arabic.

Here is same story but with Arabic subtitles. @akhbar

Today marks the 7th anniversary of the so called "Syrian Revolution".
And I ask again, why is it when the western media and its followers claim they support the "Syrian rebels" and NOT the terrorists against the Syrian government, they never specify which rebels they root for?

2-
Here's why: because in Syria the "opposition" is divided into 3 main groups: ISIS, Al Nusra (Al Qaeda in Syria) and the so called "Free Syria Army" which is also divided into nearly 30 different fractions with different goals and sponsors but have the same radical ideology

“JTS” calls on other groups to join for greater unity.

#pt: What does “JTS’s” formation mean?

- Unlikely to be a full merger, but closer Ahrar-Zinki coordinating ties have been clear for months.

Sharmine Narwani @snarwani
A detailed reminder that the US-armed "Free Syrian Army" was mainly a PR front for Al Qaeda, ISIS and other jihadist terrorism in #Syria. A must-read: libertarianinstitute.org/foreign-policy…

2) Inside #Syria, since the beginning, it was always understood that there was essentially no difference between US-armed FSA "rebels" and Nusra/terrorists. The FSA said it themselves:

3) There is also ample evidence that the US military avoided targeting Nusra (Al Qaeda) and even expected the terrorist group to welcome working with the US-armed FSA: 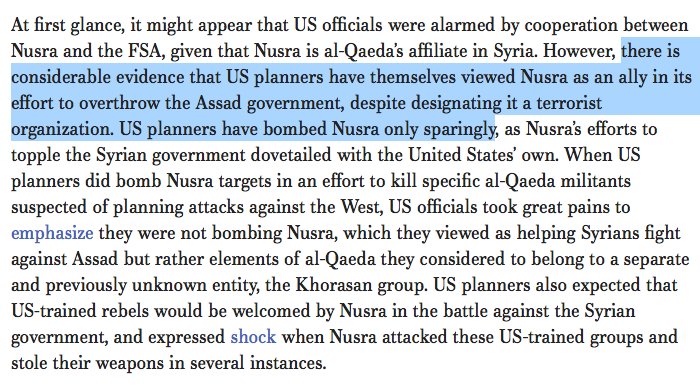