On this white nationalist podcast, League of the South's Richard Hamblen says that he is "best friends" with Suidlanders leader Simon Roche, who had travelled with him to the neo-Nazi rally in Charlottesville, and stayed in his home for three weeks during the Suidlanders US tour.
Suidlanders leader Simon Roche has himself been on "The Political Cesspool" several times, and the podcast considers him a "great friend." (Alongside David Duke, Richard Spencer, David Taylor, Kevin MacDonald, etc etc etc) thepoliticalcesspool.org/jamesedwards/?…
It's not exactly news that Simon Roche and Suidlanders have deep ties to white supremacists. Here's some background from @EyesOnTheRight angrywhitemen.org/2018/04/22/sui…

Suidlanders, an extremist South African organization with white nationalist connections, is back in Washington DC "speaking to important people." Keep an eye out for them.

Adding this reporting from @EyesOnTheRight to the thread angrywhitemen.org/2019/01/06/lea…
The last time Suidlanders was in the United States, we got this BS africasacountry.com/2018/02/search…
Missing some Tweet in this thread?
You can try to force a refresh.
Tweet Share Email Embed

Get real-time email alerts when new unrolls (>4 tweets) are available from this author!

More from @mbueckert see all

Michael Bueckert
@mbueckert
#AfriForum's Ernst Roets has a dishonest "fact check" regarding what he calls "Fake News," or what I call an accurate critique of his white nationalist politics. I only want to point out a couple of issues:

Roets says: "AfriForum does not believe that there is a white genocide happening in South Africa." It's true that they are more careful than they used to be (see FIFA video), but also, here's Roets sharing alt-right propaganda videos about "white genocide."

Roets says that #AfriForum condemns the alt-right and doesn't want to be associated with those kinds of individuals. Oh, you mean like Steve Hofmeyr, you frequently talks about "white genocide," the benefits of apartheid, and retweets literal Nazis?

Organizer 1: CitizenGO Canada creates rightwing petitions. It currently has a petition calling on Trudeau to hold a referendum on signing the UN migrant compact, saying it is pushed by "Soros" and "globalist elites" to gain "global control." These are classic anti-semitic tropes.

Mark Malone
@soundmigration
White supremacists on tour in Ireland this weekend with a deliberate plan to intimidate people in direct provision centers across the country. In Wicklow tonight and going to Mayo and Donegal.

Julius Ghost👻 (Read Pinned Tweet!)
@JuliusGoat
The reason you're not "supposed" to use the word "nationalist" is, it's the word neo-Nazis use to describe themselves.

Congrats to the Republican Party on your coming-out party.

This July, Donald Trump went to the EU and used the exact language of far right extremists, white supremacists, and neo-Nazis, to talk about immigrants.

Not hyperbole, not slander. Just noting, what he said is exactly what they said. cnn.com/2018/07/13/pol…
This August, Donald Trump used the exact language of neo-Nazis and white supremacist groups to talk about South Africa.

- Former white supremacist claims in reddit AMA that neo-Nazis use Fortnight to recruit.

- 6/29/18: Niche comics website runs story about claims. Does not fact check or ask Epic Games for comment but tells readers "It's something that we all need to be aware of, especially those of us who have children of our own who play games online."

The Big White Lie
@ErrantNatives
One of the reasons we do not want the #BRITISH in #Africa is because of the rubbish about we, the Natives. We do not want you here, even if you 'spoke to our 'leaders''... peddling your #bigwhitelies to a population for pity. You know NOTHING ABOUT us..
#propaganda
#LiesLiesLies

Nor do you make an 'effort' to ASK - instead, with a mule-headed white stubborness, you say we know nothing. Well, let us educate you 101 @BBCBreaking and @theresa_may. The picture you used - those elephants were NAPPING - SLEEPING 😂
#thebigwhitelie
#thebigwhiteconservationlie

NowThis Newsroom
@newsroom
Numerous news outlets reported yesterday the Parkland shooter was a member of a white supremacist organization. We decided not to report it because we felt it was suspicious, and it appears our suspicions were warranted. Here’s what happened. 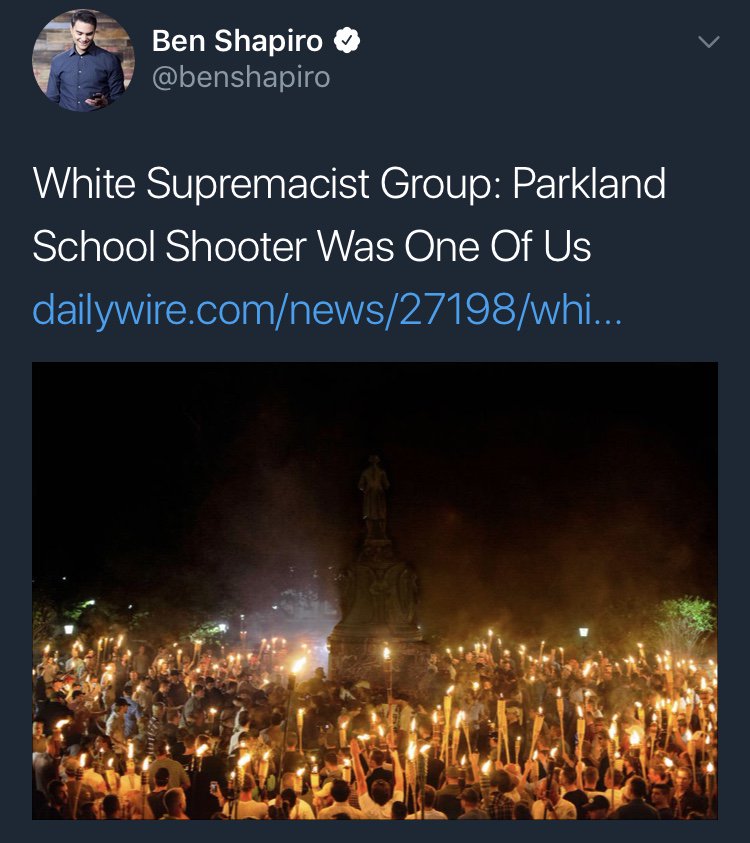 The first site we saw reporting the claim was the Anti-Defamation League, which quoted a white supremacist named Jordan Jereb. Jereb says he is affiliated with a Florida hate group called the Republic of Florida.
The ADL article also cited discussions about the shooter’s affiliation on the notorious trolling website 4chan.
Read 21 tweets

Angus Johnston
@studentactivism
One more quick thing about that NYT profile of Hovater. Remember the podcast the author mentions? Well, I listened to a couple of episodes.
Here's the sole quote from the podcast that appears in the piece. It's ... not representative of the show's content.

Heimbach does most of the talking on the podcast. Hovater is mostly his sidekick and foil. I never heard them disagree. Here's what I did hear…
Read 29 tweets