lol and yet white people are labeled racist every 5 minutes

lol and yet white people are labeled racist every 5 minutes

White people that have contributed to successes of this great country far more than anyone seems to remember.

The hate is real, but it's not from #MAGACountry

More from @TXTrumpette89 see all

Lola Netty
@TXTrumpette89
Another city ran by Democrats, on the verge of becoming a giant pile of garbage...
Only this time, it happens to be the capital of this great state of TEXAS!
@austintexasgov @Austin_Police @MayorAdler

I've been told that some of this type of area under highways are maintained by @TxDOT (although this doesn't seem to be a highway). I have seen and reported many of these that are under TXDoT control. I really want to know why the City of Austin is not doing more to prevent this.

@GregAbbott_TX what can you do to help clean up our capital? Maybe you know a Republican or two that could make a huge change in Austin?

Last election Democrats ran pretty much unchallenged here. I just refused to vote for any of them...better than picking the least worst..

Lola Netty
@TXTrumpette89
Though this is a complex &amp; ongoing #investigation, it’s clear the DNC has not been open &amp; transparent—for what reason we don’t yet know. This is a poignant example of why we need new laws to open up the finances of our elected representaforbes.com/sites/frankmin…aRnSz0ig
[7/2017] Imran Awan, a House staffer at the center of a criminal #investigation potentially affecting dozens of DEMOCRATIC lawmakers, has been arrested on a bank fraud charge &amp; is prevented from leaving the country while the charge is pendipolitico.com/story/2017/07/…nsWR
[08/2017] Awan was still on payroll for Debbie Wasserman Schultz until he was indicted last mth...longtime IT staffer who worked for &gt; 2 DZN House DEMOCRATS, has been at center of an ongoing criminal probe on Cap Hill related to alleged procurement thpolitico.com/story/2017/08/…C4fn
Read 27 tweets

Sami Schalk
@DrSamiSchalk
Thread on local #racist violence & what we do now:
Recently a white male school teacher abused an 11 year old black girl student, ripping out her braids. This occurred in #MadisonWI.

channel3000.com/news/madison-t…
I am out of town & unable to attend the community meeting about it today, but the anti-black violence & hatred in Madison is increasingly palpable to me, as someone who has lived there less than 2 years.
@AboutFreedomInc has been fighting to get cops out of schools for over a year now. Their youth squad attends every school board meeting to share stories & ask @MMSDschools to invest in youth of color & youth with disabilities not police.
Read 18 tweets

GHWB was the architect of today's #racist #GOP.
GHWB ran a series of covert wars.
GHWB stayed silent while thousands of people with #AIDS died.

You can laud his post-presidency philanthropy without erasing history.
This insistence on rehabbing politicians who did real damage--folks just did this with John McCain--because they died is revisionist and does actual harm.

Many people were hurt and many others died because of Bush1.
There is no virtue in dismissing that fact.
This is the 30-year-old #WillieHorton ad everybody is talking about
cnn.com/2018/11/01/pol…
Read 3 tweets

Robyn Lawson: Itisahwâkan
@RobynWins111
1. Had the misfortune of hearing a full-on, old-fashioned white Colonialist diatribe delivered on CKNW this morning by Bruce Allen on his not so "Reality Check" .

#racist #classist #Transmountain #cdnpoli #bcpoli #protecttheinlet
2. Bruce delivered all the typical supremacist big business standard lines of comradery. Bruce was speaking about the Kinder Morgan protest on Burnaby Mtn & to his audience to keep them focused on the 'right talking points'.
3. Bruce spoke about the water & land protectors in the most dehumanizing terms he’s allowed to on morning radio. He called First Nations peoples DTES homeless derelicts “unaware of what they’re protesting anyway”, merely looking for a place to squat.
Read 14 tweets

Ann Archy 🍩
@AnnRCY
.Every day in twitterverse I watch straight young white people who identify as "progressive" demean and diminish the lives of the marginalized & insist that WE need to recognize that "economic security" is the #1 issue all liberals need to focus on which will then solve all. (1)
.I watch them speak from their lofty privilege not realizing that they are standing on a platform built by the very people they demean. Their lack of gratitude for the work of these before them blows my mind. Their robotic devotion to an establishment man with minimal (2)
.accomplishments in his career is staggering. What saves me from despair is the ongoing work of POC and LGBTQ activists and allies who continue to engage the #racist & #homophobic #misogynist #transphobic "sleeping" people. Huge credit to all of you doing this work (3)
Read 14 tweets

Vapaus
@sakkoira
Thread: things #white people are accused of doing wrong. Sometimes it's not even about doing, it's simply about white people being.

The unbearable whiteness of cycling..." 😬

@VICE @motherboard in Germany is spreading a lie that @facebook @messenger end-to-end encrypted "secret conversations" can be decrypted; because the author @ok_but_why does not know what an HMAC is …

The piece runs thusly (via Google Translate) - and it conflates the abuse-reporting mechanism with the "Franking" mechanism that "Secret Conversations" uses, and which (a) @matthew_d_green helped design and (b) is fully documented.

I know, because I led the project. #lol 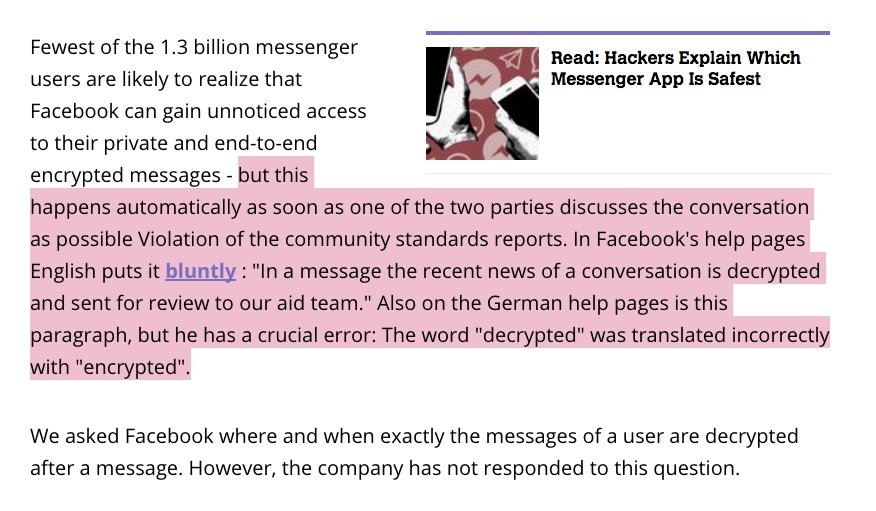 The Franking mechanism is designed to support abuse-reporting: if Alice receives abusive material (eg: unwanted dick-pics) then she may want to report them to Facebook... but (given the nature of E2E) how can we trust Alice not to make a bogus report to incriminate Bob? 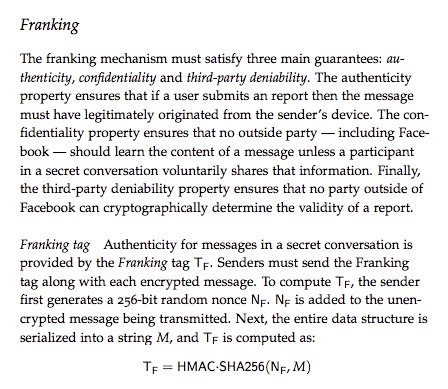