, 3 tweets, 2 min read
My Authors
Read all threads
Who was the October surprise causing Hillary to drop 7%?

Comey blamed for her loss.😄

More from @WellHellsBells_ see all

Why were Utahns visiting? Current activities?

Questions: Why burn? Not their kids? Destroy DNA evidence? Silence witnesses? Who really killed them?

Mo's lived there safely for yrs.

Why now?
Why burn?

"It is still unclear what motivated killings, which took place on a dirt road between Chihuahua and Sonora states."

My guess: Witnesses kill by own in ambush.

I'm aware of this CRAZY story, but just noticed adopted kids from Ukraine.

Was he involved in LDS human trafficking rings?

The hidden cabal hand at work.

How does this bizarre story tie into
-Ukraine
-LDS human trafficking
-Cabal activity?

Why did MacNeill receive SO MUCH protection from being prosecuted? 3 years of constant fighting to re-open case by daughters.

"Despite the constant negative press covfefe."

watchful one
@watchful1
@ASpotIntheCloud it reads like a coup - imo some LE were out to get the President of the United States.
@ASpotIntheCloud as you know - all based on political opposition research and foreign intelligence that was unvetted while circulated through classified systems without following proper standards & procedures. while in the background a "operations" were put in place to "get the President"

Greg Rubini
@GregRubini
#Comey 's transcript was released ONE day after the hearing.
The question is: Why the transcript of Bruce Ohr's hearing HAS NOT YET been released?

Note: 3 months have passed since Ohr's hearing
it was on Aug 28

Thank you, James Comey, for investigating Trump’s former deputy campaign chairman Rick Gates; who pleaded who guilty in February to conspiracy against the United States and lying to investigators. 2/6

Caroline O.
@RVAwonk
Comey is talking about his first meeting with Trump. Says no one asked about Russian interference (what to do, what comes next).

"It was all about PR," how to spin the story to minimize Russia's role so it wouldn't take away from Trump's victory.

#ComeyInterview
Comey says he soon started taking notes after each meeting with Trump because he was worried Trump would lie about what happened/what was said. ("Trump does not have a high regard for the truth.")

TrumpSoldier
@DaveNYviii
1) The Scope of the Inspector General Report and the Inevitable March Towards a Special Counsel to Investigate the Department of Justice. 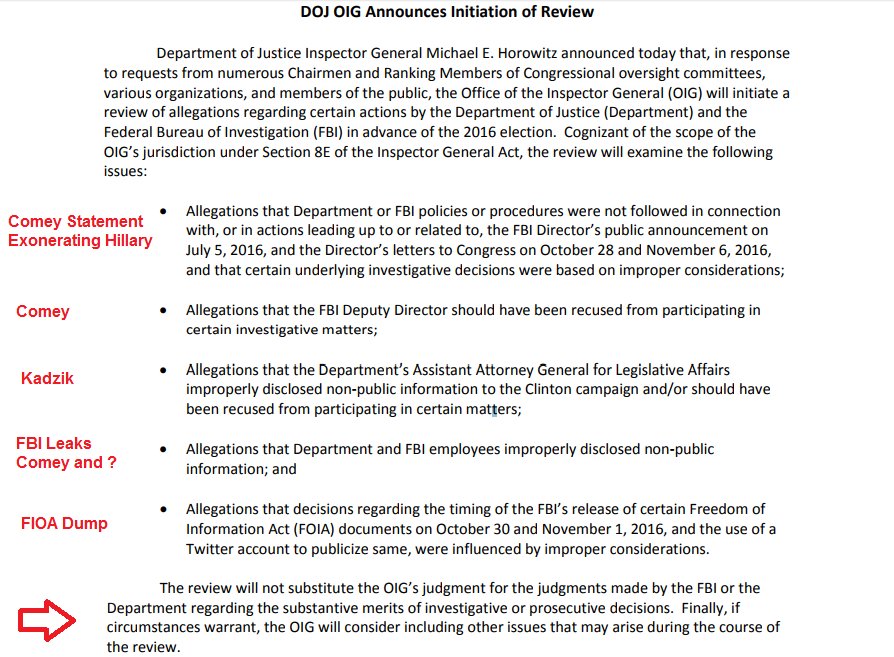 3) The Impetus
"in response to requests from numerous Chairmen and Ranking Members of Congressional oversight committees, various organizations, and members of the public"
Read 32 tweets