'Who hurt you?'
'Vic Mignogna'

'If someone sexually assaulted my wife, i'd take legal actions against them. Not go on an social media brigade against them. Because i'm a person NOT AN IDIOT'

-Nick spot on with how mental wife beater Ron chose to react to this.

All the more reason no one takes them serious.
Ron is such a dumbass. In his boring rambling he even states 'maybe he didn't mean anything by it' which makes what he and the rest of kickvic did to him look even more evil than usual.

You don't call someone a predator when you don't have evidence and aren't even sure yourself.

Ron has reached full parody mode now. Having the nerve to ask if Vic 'assumed consent' over lines that fans REQUESTED him to do.

Outside of how dumb that is, he lacks self awareness. Ron didn't ask his ex wives' consent before BEATING THEM WITH A REMOTE!!!

Ron admits that his own lying fiance Monica also hugs without consent making his entire idiotic tirade against Vic void.

He tries to spin it that theres not hundreds of videos of her doing it. Thats because literally NO ONE gives a shit about Monica Rial. People want to see Vic.

Take a shot! Ron is whining about the GFM again.

Also doesn't understand why Ty is giving info publically through Nick. Maybe because we can't fully rely on the legal system to do its freaking job (See TCPA hearing) and this allowed the public to see how evil defendants were.

Ron concern trolling about 'doxxing' people. As many people on the kickvic side that do it (Dominique Skye, Lynn Hunt, Marzgurl) i have no sympathy for names in a LEGAL CASE being out.

'You said the case would be expensive but did you ever consider the cost for Vic?'

Yes you dumbass! Thats why Nick created the GFM.
Hes probably still bitter that Lemoine got boned during the Fees hearing. Him and Monica still gotta pay.

I'm not sure how much i can take of this wife beating evil brat. Hes still acting like Vic was wrong to defend himself against false accusations and is lying about the intent of Vic's ill advised apology tweet.

No matter how the case goes, we have evidence that defendants LIED.

'Short term? There is no long term. Ask Stephanie Nadolny. Ask Tiffany Volmur. You're out of work for a year... two years? You're gone, you vanished. Nobody cares'

Harsh but true. Ron is a dumbass if think Vic could survive without fighting back to end this now.

Also Ron is dishonest in bringing up the Chuck email, since Vic had NOTHING to do with that. Chuck Huber wrote it solely in an attempt to bring both sides together.

Jamie Marchi lying to Chuck about not making statements that were untrue. Outside of the countless lies by both Monica and Ron, Jamie is lying about the hair incident.

She was also pretending to be a close friend up until a WEEK before DBS Broly movie. Making her dishonest.

This wife beater is still lying about not wanting to ruin Vic's career (despite tortuously interfering with Kameha Con contract and endlessly defaming him as a predator for a full year) but wanting to help point Vic on the right direction. 🙄

On a slightly unrelated note, if you want to see how delusional and evil #Metoo proponents are, watch this clip from Crowder. The woman straight up admits she will continue believing women even after they have been proven liars.

More from @Ryumoau_Juno see all

Sorry I forgot the name of the douchebag who doxxed That Umbrella Guy.

He was irrelevant to me till now but apparently hes always been an asshole even during comicsgate.
No surprise to see those people leap on the KickVic train now. Despicable.
We can add another to this list already:

This person also apparently tortuously interfered with some of Vic's conventions, getting him cancelled. Why are these people ALWAYS worse. 🤦🏿‍♂️
Read 9 tweets

Ryumoau
@Ryumoau_Juno
Deposition of Vic Mignogna #4 - The End
According to Nick, Friday is the deadline for Monica Rial and Ron Toye to file their TCPA.

Considering how cowardly these kickvic lunatics are, i fully expect them to file by then.
Nick said Cuck Lightyear himself, Greg Doucette, has endorsed the Vic GFM.
The mental patient still believes MoRon will get funds from the GFM if they win their TCPA. Despite the TOS for Go Fund Me making it clear thats illegal.

Invictus
@TBPInvictus
Eight years ago, the hacks at the @WSJopinion editorial page published a breathtakingly dishonest piece. Even for them, which is saying something. It had to do with the labor market. Here is the headline. 1/

They compared the first pass of Sept 2011 jobs (103,000) to a supposed 1.1 million under Reagan 28 years earlier. Sadly, however, their narrative could not have been more of a lie and is quite easily disproven. 2/
Here is the money shot from the editorial, paying homage to St. Ronnie in the most fawning of ways: 3/

brennan'sorangejumpsuit
@15poundstogo
Eight years ago today. Hours before Benghazi (and a similar, albeit less deadly incident in Cairo) ...

T. Greg Doucette
@greg_doucette
Probably. They're so bad at it it's hard to tell though tbh

She never claimed to be at Tekko 2010. Why are you lying?

Eric Columbus
@EricColumbus
Eight years ago today, a 9-year-old girl named Christina-Taylor Green was shot and killed while attending an event with her congresswoman, @GabbyGiffords. I think of Christina every year on this day. 1/

Christina was born on a very sad day, September 11, 2001, and was one of 50 babies born on that day to be featured in a book titled "Faces of Hope." 2/
The granddaughter of Dallas Green, who managed the 1980 Phillies to a World Series victory, and the daughter of a Dodgers scout, Christina (long brown hair, at right) was one of two girls on her Little League baseball team., the Pirates. 3/ 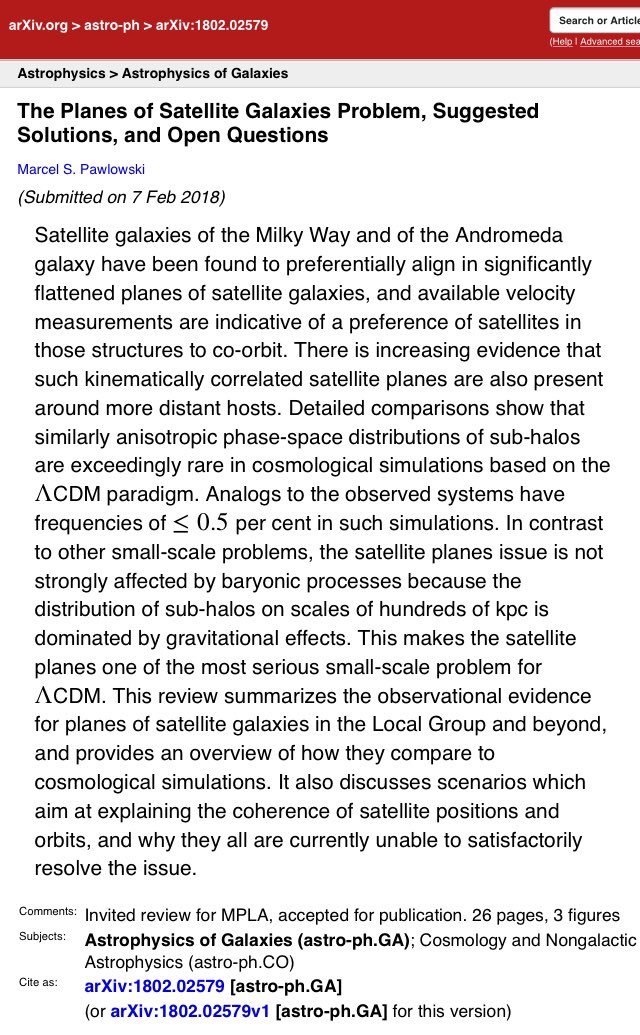 Some time ago I was invited by MPLA to write a brief review on the Planes of Satellite Galaxies issue. Since there wasn't any review on the topic out there yet, and because people had been asking me frequently for a good introduction to the topic, I happily accepted.
Instead of repeating the review's content here, let me just give you a summary of what you can find in it. I was asked to write a "brief review" of typically 15 pages. What I came up with is not quite as brief, but could well have been three times as long.
Read 11 tweets