Thomas Abt @Abt_Thomas
, 23 tweets, 9 min read Read on Twitter
Tweet Share Email Embed
Here's a post-#Parkland checklist you can use after any mass shooting. The horror is terribly real, the tragedy overwhelming, and the frustration palpable, but we can make progress if we push hard in the right directions. Read on.
1st and foremost, remember the victims. Celebrate their lives, not their deaths. Here's a place to start: time.com/5160564/florid…
2nd, help the survivors and the victims' families. Here's another place to start: nbcnews.com/better/busines…
3rd, appreciate our first responders. Police, EMTs, doctors, and others respond heroically, if not always perfectly, to these terrible tragedies. They need our support too.
4th, forget the shooter. We know that mass killers study each other, trying to one-up the competition with higher body counts. Prevent copycats by keeping the shooter's name and photos out of the news. #DontNameThem #NoNotoriety ua.edu/news/2017/10/u…
The @nytimes, @washingtonpost, and @USATODAY, among other outlets, all identified the shooter. Pressure every media organization to never do this again. The op-ed pages of such papers rail against mass shootings, so now it's time to clean up their own backyards.
5th, admit, once and for all, that this is about guns. Americans are outliers when it comes to homicide: we kill at a rate 7x other high income countries. This disparity is driven by a gun homicide rate 25x times higher than other rich nations. ncbi.nlm.nih.gov/pubmed/26551975
Also acknowledge that the problem is getting worse. 3 of the 10 deadliest mass shootings in US history happened in the last 5 months, and mass public shootings are on the rise over the past 5 years:
hsph.harvard.edu/news/features/…
6th, push for commonsense restrictions that help keep dangerous weapons out of the hands of killers. Blue states like Connecticut have led the way here: nytimes.com/2018/02/17/nyr…
Also, we regulate both cars and drivers, and no objects. Why can't we do the same with guns? @NickKristof said it best after the Las Vegas shooting: nytimes.com/2017/10/02/opi…
Become a single-issue voter, matching the intensity of @NRA supporters. Hold your politicians accountable. Give money to the right candidates and to organizations like @Everytown, @GiffordsCourage, @Bradybuzz, and @teamtrace, and vote vote vote.
7th, realize this is not just about federal gun control. We need better threat assessment and response by states and localities too. Almost all mass killers display warning signs before acting, and many are previously involved in domestic violence. everytownresearch.org/reports/mass-s…
The @FBI and Florida social services both screwed up with #Parkland and must do better. At all levels, protocols need to be in place for addressing warning signs. One important tool that even some conservatives support is the Gun Violence Restraining Order:nationalreview.com/2018/02/gun-co…
8th, continue to push back on all the silly standard arguments that gun advocates try to sell to the public at large. @Jerry_Ratcliffe made a great primer for just this purpose: jratcliffe.net/blog/some-resp…
9th, as @Jerry_Ratcliffe has observed, recognize that we have at least four major gun violence problems in the US. In order of lethality, they are: (1) suicides, (2) urban violence, (3) domestic violence, and (4) mass killings.
In each case, the typical victim is different. For suicides, it's older white men. For urban violence, it's younger black men. For domestic violence, it's women and children. For mass killings, it can be anyone.
Mass killings account for less than 1% of all gun violence, yet receive a hugely disproportionate share of media coverage and public attention. This is understandable, but responsible coverage will make room for the chronic challenges of gun violence, not just the acute crises.
My focus is usually urban violence, the category of gun violence responsible for the most homicides. If you want some solutions in that area, here's an op-ed that shows what to do (ignore the title, I didn't pick it): vox.com/2016/9/30/1311…
If I were in Congress or working as a state legislator, I would craft a comprehensive bill that addresses all four problems at once, uniting these constituencies instead of making them compete against one another for attention and resources.
10th, here's a few things I wouldn't do. I wouldn't buy into the distraction that this is all about mental illness. It isn't. Most mass killers are not mentally ill in the clinical sense and we already stigmatize mental illness too much.
I also wouldn't turn our schools, public areas, or workplaces into fortresses. It wouldn't help much, it'll be very expensive, and by doing so we'd give in to terror and fear, which is exactly what the killers want.
Finally, I wouldn't send out "thoughts and prayers," then do nothing as the bodies continue to drop. I'm looking at you, #Republicans in Congress, but not just you.
Thanks for reading. I hope you find this checklist helpful, and please add missed items or points when you respond or retweet. Bottom line: we are not helpless in the face of this horror. Let's do something, now.
Missing some Tweet in this thread?
You can try to force a refresh.
Tweet Share Email Embed

More from @Abt_Thomas see all

Thomas Abt @Abt_Thomas
1/ It's well understood by criminologists that disenfranchising felons serves no public safety purpose. If anything, it's counterproductive and inhibits their reentry into society. nytimes.com/2018/04/21/us/…
2/ The real reason for these policies is to prevent poor people, who are disproportionately people of color, from voting. It's just another example of the GOP's systematic effort to disenfranchise those who disagree with them politically.
3/ Many have eloquently opposed these restrictions and I agree with all those arguments, but let me add a new one here based on my time as a criminal prosecutor.
Read 16 tweets

Thomas Abt @Abt_Thomas
1/ Sessions put his reasons for DOJ’s sentencing policy in print, so now we can show just how wrong he is. Read on.
washingtonpost.com/opinions/jeff-…
2/ “Drug trafficking is inherently violent.” Yes & no. Violence accompanies any illegal activity, but drug dealing much less violent today.
3/ In 1980s & 90s, the crack trade was notoriously dangerous, and experts agree it drove much of the violence and crime back then.
Read 13 tweets

#libertyandjusticeforall @Mark923to25
1. New #Qanon posts. Q made it to Times most influential! so did Potus and Kanye...Power to the people! This is huge as far as public disclosure! interesting..#wwg1wga

2. Anon posts that the congressional hearing is incredible boring and will not wake up "asleep" voters/public...Q says focus on House floor vote taking place now...perhaps those who vote against and for will tell us something about those officials. #Qanon #wwg1wga

3. The floor vote below pertains to congress insisting DOJ fully comply with subpoenas from intel and judiciary committee relating to violations of FISA by DOJ personnel...Yays won 226 to Nays 183 #Qanon #wwg1wga

Richard Armande Mills (RAM) @RAMRANTS
In a clip taken from a documentary set to be broadcast on @CBS/@CBSNews, #Parkland school shooting survivor, @DavidHogg, admits he went back to the school after the shooting. "I got my camera, & got on my bike, & rode as fast as I could - 3 miles from my house - to the school."
In this @NYMag article (nymag.com/daily/intellig…) published 16 days following the tragedy, it reports @davidhogg111 went home after the shooting & returned to school - against his parents’ wishes - for “B-roll.”

The article says nothing about interviews being conducted at night.

I still have questions...

Why’d Hogg attempt to coax a student he interviewed into saying “we need diversity” — during the shooting?

Why was the 2nd interview audio only?

Why’d we only start hearing Hogg returned to the school at night — AFTER this thread?
Read 9 tweets

🔴Operation 🕆ruth🔴 @colinsdad888
One needs to ask and have answered a few questions from the Parkland High shooting.
Why were the paramedics held at the gate, 500 yards away, instead of allowed in to give aid?
Why weren't there Medivac Choppers called to Parkland High to give aid?

WHY did they have another drill at Parkland High which then lead to a code red evacuation with only 20 minutes left before school was officially out for the day??
WHY were 4 uniforms standing down while the shooting rampage progressed inside the school at Parkland??
WHY were the bodies of the victims forced to be left in the school building all night?
Read 16 tweets

Richard Armande Mills (RAM) @RAMRANTS
I can. Their response feels contrived, whether natural or not. A lot of these kids instantly took to the media (or social media) to aggressively push for gun control when other school shootings haven’t instantly produced verified media stars and reactions. It warrants suspicion.

You’re not a ‘conspiracy theorist’ for noticing strange occurrences after #Parkland. The fake survivor accounts, @davidhogg111 boasting about viral online fame on YouTube, the clip of him appearing to forget rehearsed lines, marches being organized before funerals... Suspect.
It’s okay to ask questions. Don’t ever let the left tell you different.
Read 17 tweets

Chellie Pingree @chelliepingree
As a parent and grandparent, I am grieving today for the 17 families who lost loved ones in the #Parkland school tragedy and for the survivors who will be forever haunted by what they lived through. 1/7 #mepolitics
I’m ashamed to be in a Congress that continues to sit on its hands while these tragedies and our constituents demand swift action. 2/7 #mepolitics 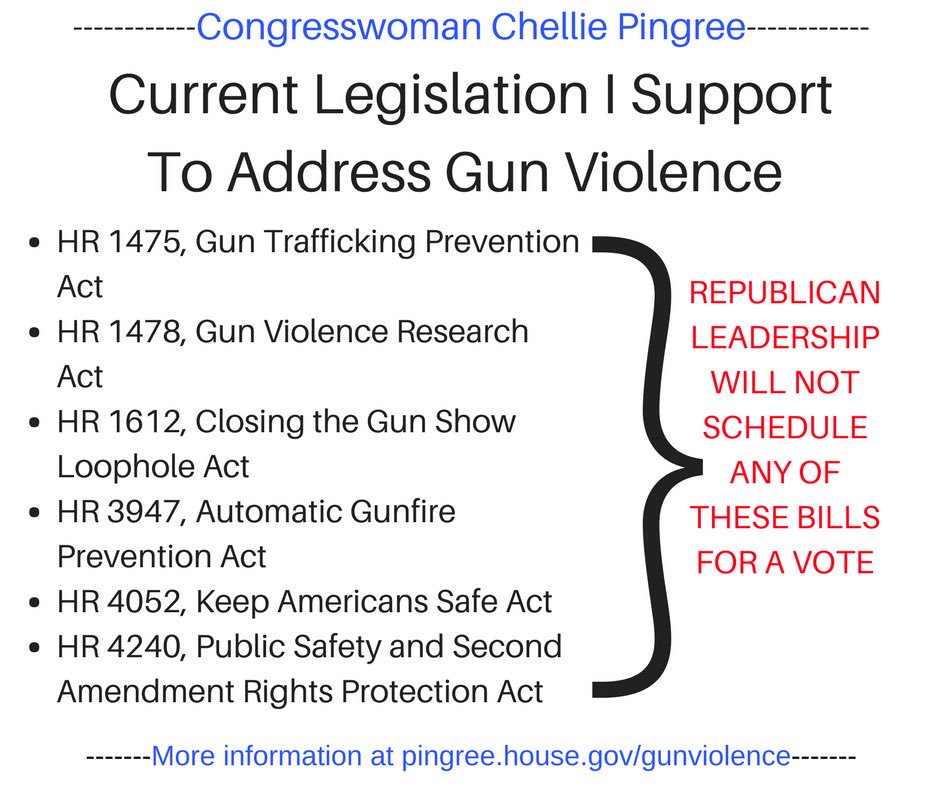 It’s not for lack of trying on the part of Democrats, who have offered sensible legislation to stem the flow of weapons into the hands of those who would use them to slaughter members of our communities. 3/7
Read 7 tweets

If this is U let us know U want to participate! If it's a writer U know, tell them to contact us here! Remember our Horror Promotions are always FREE!

Hey just wanted to let everybody know I got a couple of DM's asking questions about requirements Etc. The only requirements are:
1. Be an active twitter horror author.
2. Be following @NonprofitHorror
3. Ask to be a part of it.

That's it! 😁
No worries, I've got everyone who responded to this thread or has DM'ed me added to the list. Please spread the word!