Discover and read the best of Twitter Threads about #IaGov

Stephen Gruber-Miller
@sgrubermiller
Iowa Gov. Kim Reynolds plans to sign the bill banning transgender women and girls from competing in female sports today at noon in the Iowa Capitol's rotunda, according to an update to her public schedule. It passed the Senate yesterday. #ialegis #iagov desmoinesregister.com/story/news/pol…
Gov. Kim Reynolds is in the Iowa Capitol rotunda, where she's about to sign a bill banning transgender women and girls from female sports. She's connecting it to Iowa's "impressive legacy" of advancing women's equality.

Behind Reynolds are signs saying "protect my innocence" and a transgender flag.

Iowa Safe Schools
@iowasafeschools
Iowa Safe Schools' Executive Director, Becky Smith, released the following statement regarding the passage of HF 2416 today:
"It’s incredibly disappointing and frankly disgusting that there are members of the Iowa Legislature who have equated being transgender to cancer and referred to LGBTQ people as "mentally ill".
The supporters of this bill covertly strategized to ram this bill through to passing to avoid any confrontation, question, or challenge against this discriminatory bill.
Read 7 tweets

Ras Smith
@rasforiowa
My name is Ras Smith and I am running for Governor because I believe that Iowa’s greatest days are ahead of us. (1/7)
Join our movement to bring Iowans together around our shared values of hard work and community:
secure.actblue.com/donate/ras-lau… #IAGov (2/7)
I love Iowa - it’s where my wife and I are raising our daughters, Iowa is where I love to hunt, coach, mentor, and farm. (3/7)
Read 7 tweets

Bob Krause
@KrauseForIowa
1) Ever have one of those #IA "ewwww . . . " moments? @AP article on climate change sez that so-called 100th meridian line (hisoric line marking shift from the green West to brown West) has been moving east at about 3.6 miles per year. On edge of NW Iowa now. #IApolitics #IaGov
2) If "100th Meridian" moving projection is right, in about 30 years the dividing line twixt #BrownWest & #GreenWest will be in #FortDodge, #Iowa. Scratch about 90% off of the value of an acre of #FarmLand west of that line if it happens. #GlobalWarming #IaPolitics #IaGov
Many do not know that in the not too distant past, the gorgeous & unique #LoessHills of western #Iowa were sand dunes. If the #100thMeridianMovingProjection continues, they will be again. #IaPolitics #IaGov #GlobalWarming #IaLegis
Read 3 tweets

Bob Krause
@KrauseForIowa
#CovidKim Outrage du jour. @KimReynoldsIA refused 2 fund cautionary testing at nursing homes. Instead, $450K was diverted from #CARESAct to pay #IaGov staffing already paid by #IaLegis, then she hid shift! She got greedy. Folks will die. #IaPolitics #IaGov iowalabornews.com/?p=28091&link_…
Half of all #Iowa #CovidDeaths occur in #NursingHomes and #CovidKim cut testing for Nursing Homes and took the money that it could have been used for to expand her personal staff budget. #IaPolitics #IaGov @IAGovernor @IowaGOP #COVID19 #Covid19IA
#CovidKim set the stage for general destitution of #NursingHome lives by gutting travel allowances for #NursingHomeInspectors shortly after she became governor in 2017. How can you inspect nursing homes if you cannot visit them?? #NLM #NursingHomeLivesMatter #IaPolitics #IaGov
Read 3 tweets

Bob Krause
@KrauseForIowa
Is this something a #BananaRepublic strong man or a #Stalinist East European dictator would have done? Sadly, #GOP is now an empty box, filled with wishes & nostrums of #SupremeLeader. No citizen input required unless you have his ear & money. #KAG2020 msnbc.com/rachel-maddow-…
2) #Iowa now crushed by many farm disasters, some #Trump inflicted: #China grain embargo, #CornEthanol market cut by #Trump's #EPA, #Covid's hit on meat market, extreme drought & now #Derecho, which destroyed 40% of the crop. Where's the ag plank? NADA! #IaPolitics #IaSen #IaGov
3) Is this a job for @SenJoniErnst & @KimReynolds, both of whom will speak at @GOPconvention? Will they say the #Emperor has no clothes & NO commitment to #Iowa farmers after Inauguration? Or will they continue to sing his praises as #Trump walks over #Iowa? #IaPolitics #IaSen
Read 3 tweets

Bleeding Heartland
@LauraRBelin
Biggest cheer during @iowademocrats chair @troymprice's opening remarks came after he predicted #Iowa Ds will "send @joniernst into an early retirement." #IASen #HallofFame
Sen @CoryBooker is 1st candidate to speak at #HallofFame event. (19 candidates will each have 5 minutes)
"We are being tested. This is a moral moment in America, and we must meet this test. I'm running for president because we can't take 4 more years of Donald Trump." #iacaucus
But @CoryBooker isn't just running to beat Donald Trump. That's the floor, not the ceiling. We can't just run on what we are against. Democrats need to tell people what we are for. "Every American needs health care, and make no mistake, abortion is health care." #iacaucus
Read 93 tweets

Iowa Secretary of State Paul Pate
@IowaSOS
The 2018 general election in Iowa is now official. Here is an update on the official State Canvass and the HD 55 #ialegis election:

Iowa Secretary of State Paul Pate
@IowaSOS
Nearly 39,000 votes have been tallied so far in the Fall 2018 Iowa Youth Straw Poll. Results as of now show @KimReynoldsIA ahead in #iagov race & @RodBlum with narrow lead in #IA01. #BeAVoter #iapolitics

In #IA04 @SteveKingIA has the lead. 84% of participants say they will #RegisterToVote when they are old enough. Live results available here: sos.iowa.gov/youth/poll/res… #BeAVoter #iapolitics Results are unscientific.

1. @DMRegister: "He is perhaps the most qualified person in decades to seek Iowa’s governorship"

2. @gazettedotcom: "Hubbell is the best choice to dramatically change course at the Statehouse."

In #FLGov, Andrew Gillum got the endorsement of the @orlandosentinel and the @MiamiHerald. He's now been endorsed by the 4 biggest newspapers in Florida.

Sentinel: "His platform is geared toward the middle class"

Herald: "The best candidate to pull Florida back to the center"

Iowa Secretary of State Paul Pate
@IowaSOS
The Iowa League of Heroes has arrived! Bring the kids for pictures & you can #registertovote while you're here! Varied Industries Bldg at #IowaStateFair til 4pm. #BeAVoter

Big crowd at the booth for the Iowa League of Heroes. Proud to partner with this group to promote #voterreg. #BeAVoter #IowaStateFair

Kids of all ages descending on our #IowaStateFair booth to meet Iowa League of Heroes. #BeAVoter #iasos #iagov

We are now in a recess as the panel conducts further review and mathematical configurations. #iagov
Discussion & debate continues...
Read 3 tweets

Erin Murphy
@ErinDMurphy
Good morning, Iowa. Today @IAGovernor Reynolds will deliver her first condition of the state address as governor. Her speech will begin shortly after 10 a.m. If you're stuck at work but near some internets, stay tuned here for highlights.

#iagov #ialegis
The ceremonies have begun. #ialegis senators have been brought into the House chamber, where #iagov Reynolds will deliver her address. We'll also get the state Supreme Court justices and state department heads.
The #ialegis House is never more full than on Condition of the State Day. 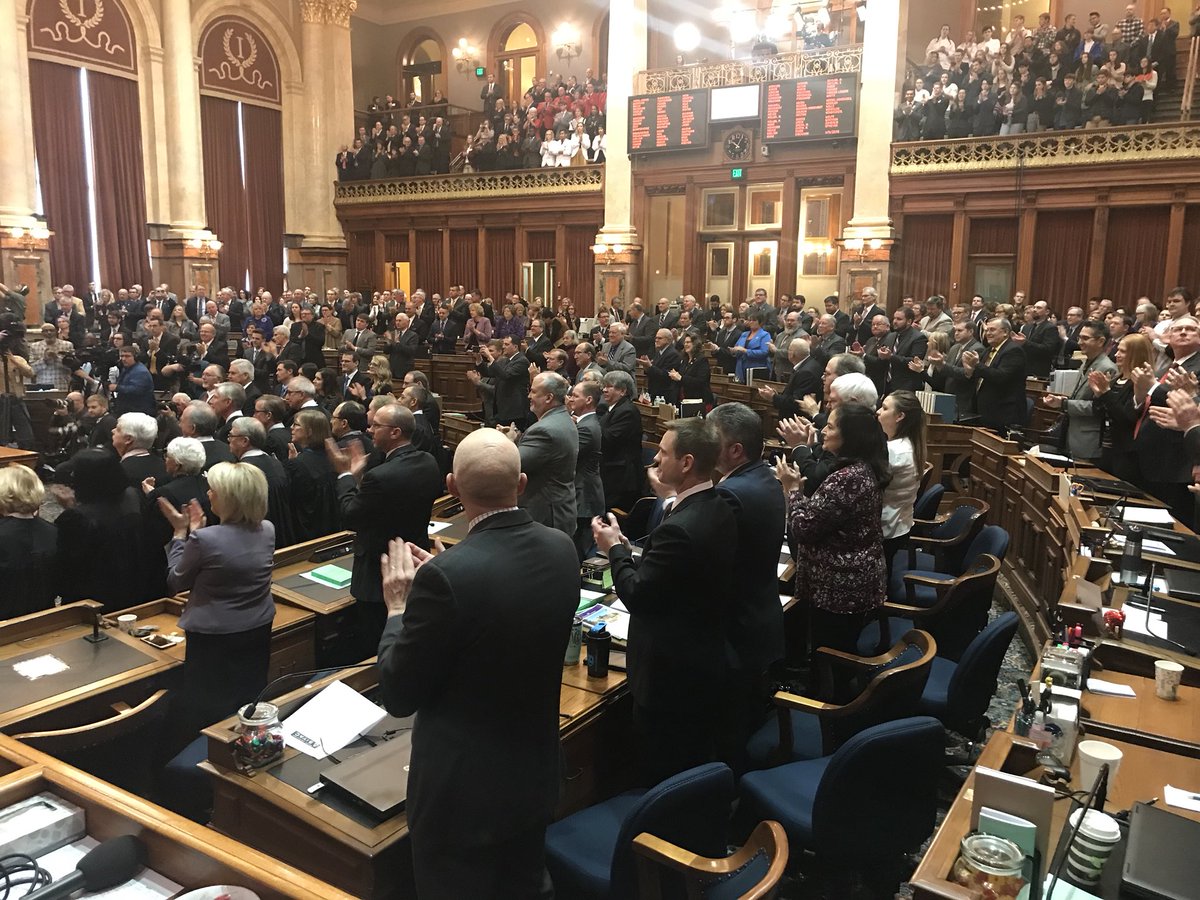