Discover and read the best of Twitter Threads about #killmonger

Uhlume 🇺🇸 A.D.O.S.👊🏽
@Behembaba
#WandaMaximoff is objectively a horrible character. She does the absolute worst things in the name of her children. Yet she has legions of fans (particularly yt women). Yet #Killmonger was demonized for trying to bring global racial justice. Even by so-called "pro-black" folk.

The Grio ran an entire article about Killmonger being wrong. Feminists accused Killmonger of being misogynoiristic. Africans accused him of being "angry". All this despite The Mouse ensuring that (1) his character dies in the effort of global liberation and (2) his death was at
the hands of T'Challa (despite T'Challa saving a CIA agent).

Jon Pyle
@jonpyle
Just watched #CivilWar. This is a linchpin story in the #MCU. So many good things that payoff later. But, what I saw with absolute clarity was the arc of #BlackPanther and Justice.
In Civil War, T'Challa is driven by vengeance masquerading as justice. He wants to get justice for his father and he thinks killing the culprit (Bucky) would be just. However...
T'Challa comes to realize that revenge isn't justice, as he watches the Avengers tear themselves apart. Revenge is reductive "justice" (which isn't justice, but reciprocity) that leaves everyone worse off. "You took from me, so I take from you" makes everyone LESS.
Read 28 tweets

Art-Eater ➡️⬇️↘️🐲👊
@Richmond_Lee
Sirius the Jaeger is a new anime with chara designs by ex-Capcom luminary Kinu Nishimura (@nishi_katsu). It's about werewolves violently killing vampires in 1930s East Asia. Directed by Masahiro Ando (Sword of the Stranger). It's got everything I like!😃

Sirius the Jaeger has some compelling stuff going on! It's too early to tell, but I think the series might be drawing a parallel between Colonialism/Imperialism and Vampirism, which was also a strong theme throughout Blood: The Last Vampire.
Blood The Last Vampire was definitely a visual and tonal influence on Sirius the Jaeger. The Vampires in Sirius look very much like the Chiropterans from Blood (designed by GOAT illustrator Katsuya Terada!)

Matt Kamen
@MattKamen
OK, we need to talk about why this is nonsense, and why it matters - and it's far more important than 'nerds being wrong on the internet': 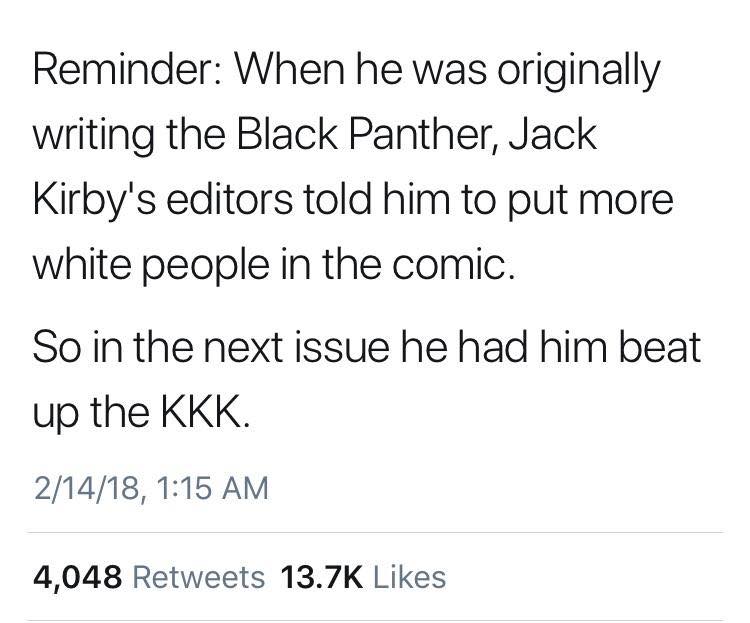 That image is a tweet that went viral last week, spurred by the movie's success. I first saw it posted by @ fatherdog, but I don't know if that's where it originated and it's since been deleted. However, the issue is that it racked up over 4000 retweets - and is completely false.
Here are the facts:
-Yes, Jack Kirby created Black Panther, in the pages of Fantastic Four#52-54 in 1966
-But. Black Panther's first solo stories were published in Jungle Action, from 1973
-That series was written by Don McGregor, with art by Rich Bucklin & Billy Graham
Read 20 tweets