@1100Penn has expanded its offerings to include in-dining-room educational services for two school kids who do not seem thrilled about it.
9–9:45 am: Reading—

📘Student 1: Where the Mountain Meets the Moon
📘Student 2: Article and questions about flying cars
📘Teacher: Fleishman Is in Trouble
9:45-10:30 am: Math—

🧮Student 1: Operations and algebraic thinking
🧮Student 2: Partitioning shapes
🧮Teacher: Google dot com > What the hell is up with this new math?
Read 46 tweets

Zach Everson
@Z_Everson
Seems to hold up rather well...

After visiting Mar-a-Lago to pick up an award from a far-right group, Reps. Hice and Gosar promoted the president’s club on Twitter

"This place here is amazing.“

"You can’t hide success and its just evidence that this president knows what he’s talking about when it comes to business.”

"Mar-a-Lago’s not a very shabby place."

"The lamb chops were unbelievable."

via @1100Penn bit.ly/2NUkYPZ
@1100Penn And America First Action has spent more than $500,000 at @realDonaldTrump’s DC hotel, enabling the president to profit from donors to his campaign’s “ one approved outside non-campaign group.”

But we don’t know how much @realDonaldTrump’s business was paid, as the PAC is months late filing an FEC report.

Zach Everson
@Z_Everson
Meanwhile, since beccoming president, there have been 0 reports of @realDonaldTrump visiting any DC-area restaurants other than his own.

@realDonaldTrump As Turkey bombs the Kurds after US troops withdrawal, remember—

The Annual Conference on U.S.-Turkey Relations took place at—

@realDonaldTrump profited from people paying to mingle with Turkish politicians.

Via @1100Penn 1100pennsylvania.substack.com/p/turkishus-of…
@realDonaldTrump @1100Penn And Turkey’s foreign minister, Mevlüt Çavuşoğlu, was at the Trump Hotel DC during the inauguration.

@realDonaldTrump and @DonaldJTrumpJr profited from it.

.@realDonaldTrump accepts money from the press every time a journalist orders something at one of his properties.

(Disclosure: Your correspondent has spent about $3,000 at the Trump Hotel DC, mostly covered by Condé Nast for bit.ly/2HNgJBv.)

Eric beat me to it.

@1100Penn With @HouseJudiciary holding a hearing on @realDonaldTrump profiting from his presidency at 2 p.m. (and @1100Penn coming up on issue 200), today we're recapping 2.5 years of Trump Hotel DC news.

Yesterday the commander in chief’s business promoted its wedding-day services with a photo of a U.S. Army officer.

via @1100Penn bit.ly/2Z4WpHA
And by getting married at the commander in chief's business, this U.S. Army officer kicked some money up the chain of command.

Zach Everson
@Z_Everson
Having a hard time coming up with a headline for today's @1100Penn other than "Holy shit, last night."

Subscribe now and see peak synergy between the Trump Organization, administration, and campaign in your inbox shortly.

Last night we witnessed peak synergy between the Trump Organization, administration, and campaign when @realDonaldTrump visited his D.C. hotel to separately address donors to a joint fundraising committee and White House staffers.

Zach Everson
@Z_Everson
@realDonaldTrump @1100Penn President Trump’s D.C. hotel had so many customers at a networking event for lobbyists last night, that when the hotel's boss went to boast about his “#success” on Twitter, panorama mode was required to show all the patrons.

Via @1100Penn zacheverson.substack.com/p/lobbyist-net…
@realDonaldTrump @1100Penn Russian-funded RT America personalities celebrated “great things” at the Trump Hotel DC. It’s unclear if they were referring to the ease w/which staffers for foreign gov't-funded media can get cash to the U.S. president or something else.

-A partner at a lobbying firm, praising the patriotism of lobbyists who are patronizing the U.S. president's hotel.

@realDonaldTrump @1100Penn If Eric Trump is no longer involved in his charity, why does this golfer—who just played in a benefit for it—call it "the Eric Trump Foundation"? [H/T @npenzenstadler]

@realDonaldTrump @1100Penn @npenzenstadler Last night a gala was held to celebrate students who committed to enlist in the U.S. military after graduation. It was held at—

bit.ly/2PqJjLS
@1100Penn At 2 a.m. this morning, Rudy Giuliani tweeted a picture of himself dining at the Trump Hotel DC.

Rudy's made overtures to Romania's gov't in the past.

Zach Everson
@Z_Everson
Feel like I fulfilled my destiny this morning by drawing an explicit-language warning from public radio. bit.ly/2EgoMWJ
Today's Trump Inc. episode really gave a spot-on depiction of the Trump Hotel D.C., right down to the clothesline-bacon and Seb Gorka cameos. Download it now for your commute: bit.ly/2EgoMWJ
Trump Cabinet members Wilbur Ross and Ben Carson fêted Kuwait at their boss's hotel last night

wnycstudios.org/story/new-evid…
16 men and women from Costa Rica and other Latin American countries (!)...said they were employed at Trump Bedminster. All said they worked without legal status — and their managers knew.

U.S. ambassador to Canada—nominated by @realDonaldTrump—invites two Canadian gov't officials to lunch at —

Have your photo taken with him by the official White House photographer.

@realDonaldTrump The bride who got married @realDonaldTrump’s Sterling, VA golf course, chatted with the president/owner, and got her pic taken by the official White House photographer is

"Soaking in the excitement of our marriage vows, welcoming a ceremony delay to watch POTUS play through, catching a congratulations from @realdonaldtrump, and including a couple of extra guests to protect our President. 👰"

BREAKING: Judge dismiss House Oversight Dems lawsuit v. GSA for seeking info related to Trump Hotel DC lease for lack of standing. "The fact that a political remedy is hard to achieve does not automatically swing open the doors to the federal courts."

Rationale the judge applied reaching the afore-quoted conclusion seems—to this very non-lawyer—like it also could be applied to the 196 Senate and House Dems' emoluments lawsuit v. Trump too.*
Read 193 tweets

Zach Everson
@Z_Everson
1/ Some personal news...
2/ After freelancing for most of the past 13 years, I’m looking for a full-time journalism position. My kids are older, so a flexible schedule is no longer essential. And I miss having colleagues and working towards longer-term goals.
3/ That being said, I'd like to continue focusing on the kind of reporting I’ve done recently. And what is beat?
Read 16 tweets

Zach Everson
@Z_Everson
.@realDonaldTrump hasn’t slammed Amazon on Twitter since it co-sponsored an event for government employees and contractors at his luxury Trump Hotel DC.

Tweet in which @realDonaldTrump criticizes Wash Po, but does not reference Amazon [h/t @eventsforgood] 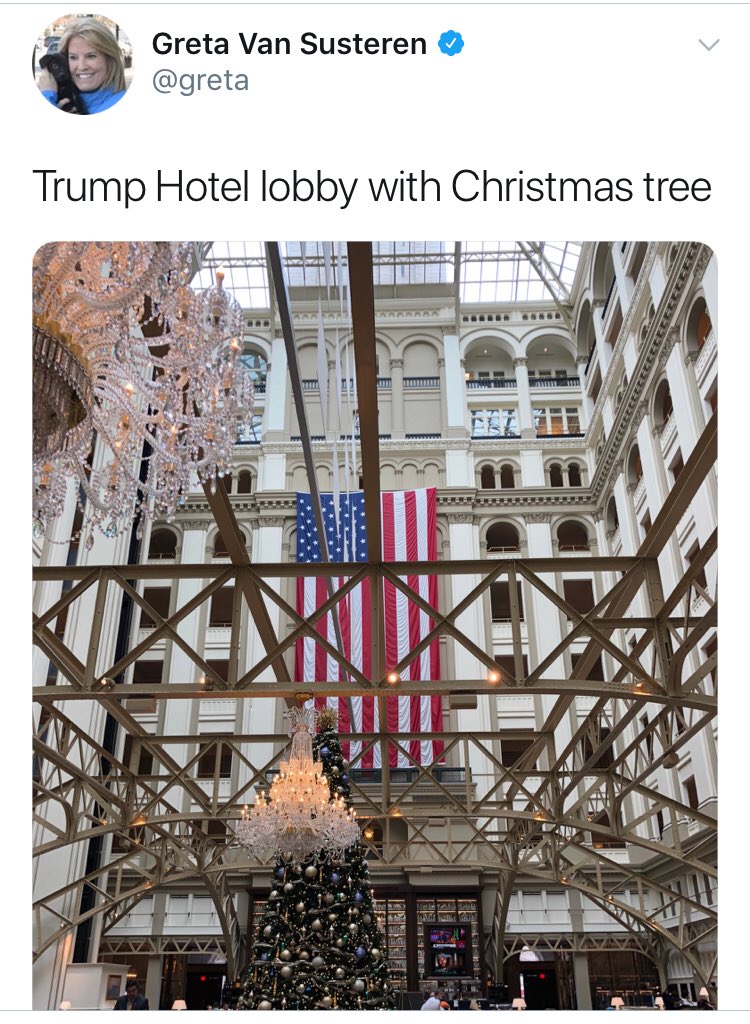 Searched for “Trump Hotel” (without quotes) on Twitter. First result was @realDonaldTrump.

It’s a 7:41 drive from the White House to the Trump Hotel DC (with a motorcade; slower for you).

Wash Times contributor and member of Trump Advisory Board “brought my parents to meet the Boss” at Trump Hotel DC instagram.com/p/Baz6EFADXp7/