Discover and read the best of Twitter Threads about #gminus2

Katie Mack
@AstroKatie
I've been tweeting a bunch of articles and threads about the #gminus2 result -- a possible indication of ✨ NEW PHYSICS ✨ coming from @Fermilab! Check my timeline for details, but I'll give a very brief and simplified summary here...
An experiment at @Fermilab is measuring a property of muons -- subatomic particles similar to electrons, but heavier -- to try to determine if our current understanding of particle physics is correct or not. The experiment hinges on the fact that muons are a tiny bit magnetic 🧲
The "Muon g-2" experiment measures how muons spin around and how that spin wobbles when they're sent around a circular track in the presence of strong magnetic and electric fields. That depends on how the muon spins and its "g-factor", related to its magnetism.
Read 11 tweets

The Muon g-2 experiment at Fermilab sees fundamental particles called muons behaving in a way not predicted by the Standard Model of particle physics. These results confirm an earlier experiment performed at @BrookhavenLab. #gminus2
theory.fnal.gov/events/event/f…

The combined results from Fermilab and Brookhaven show a difference with theory at a significance of 4.2 sigma. The chance that the results are a statistical fluctuation is about 1 in 40,000. #gminus2
news.fnal.gov/2021/04/first-…
Read 18 tweets

The Disordered Cosmos by Chanda Prescod-Weinstein
@IBJIYONGI
Anyone looking for the g-2 press conference details, here you go: theory.fnal.gov/events/event/f…
For people who can't get into the Zoom, I'm told this is the youtube channel: youtube.com/c/fermilab/fea…
#gminus2 nytimes.com/2021/04/07/sci…
Read 4 tweets

Fermilab
@Fermilab
We're less than 24 hours away from learning the first results from the Muon g-2 experiment at Fermilab! #gminus2
theory.fnal.gov/events/event/f…

Refresh your Muon g-2 knowledge before tomorrow's results seminar at 10am Central! Here's what Muon #gminus2 is looking for:
symmetrymagazine.org/article/the-my…
Muon g-2 is a blinded experiment. That means it used a secret code to obscure the result from the collaborators until the moment of unblinding. Here's how it works:

Freya Blekman
@freyablekman
The hype for this experiment is slowly rising, as new results are expected to be presented at a Fermilab colloquium later this week. Now, why is this #gminus2 experiment so interesting and gets even jaded particle physicists like me excited? A thread:

While the standard model is awesome and can predict a huge number of different behaviours of the tiny particles that we are all built from, it is considered an effective theory, meaning physicists eventually expect it to stop working (pic: @symmetrymag )

Effective theories are not necessarily bad - they're great at predicting things, but only within certain limits

A familiar example is the theory of Gravity as developed by Newton, it works really well, but if you go extreme it goes bad and you need Einstein's general relativity
Read 23 tweets

Bradley Kavanagh
@BradleyKavanagh
Gravitational corrections to the value of the muon #gminus2 - a quick roundup.

It all started with this paper - arxiv.org/abs/1801.10246 - the 3rd in a trilogy. Claimed that a correction due to Earth's gravity should alleviate tension between theory and experiment:

In a blog post - motls.blogspot.nl/2018/02/experi… - @lumidek points out (among other things) that if you're considering corrections due to the gravitational potential, the Sun's potential should dominate, not the Earth's 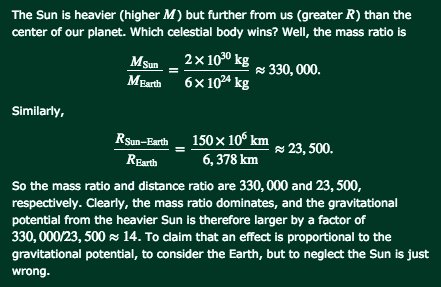 On twitter (and in a blog post) - realselfenergy.blogspot.nl/2018/02/update… - @PitifulRed offers a short proof of why the gravitational correction must be zero.