Discover and read the best of Twitter Threads about #risklimitingaudits

Lulu Friesdat
@LuluFriesdat
1/6 HOW TO SET GOOD GUIDELINES FOR VOTING SYSTEMS
1) Consult with #cybersecurity experts
2) Do what they say
House bill #HR3351 says "the voter shall have the option to mark his or her ballot by hand." That's good. That's what the majority of cybersecurity experts recommend.

2/6 HOW NOT TO SET GUIDELINES FOR VOTING SYSTEMS
Senate bill #SecureElectionsAct sets up a panel of "independent experts on #ElectionSecurity" then fills it with ppl who are NOT #security experts. If you have to have heart surgery - do you want a surgeon or a hospital admin?

3/6 The #SecureElectionsAct has #bipartisan support, but contrary to current narrative it is NOT less intrusive to states - just less effective. It still sets up standards - but instead of specific ones, they are undefined & will be determined later by a panel of non-security ppl
Read 7 tweets

Jennifer Cohn
@jennycohn1
I appreciate efforts by Republicans for the Rule of Law to promote election security, but it matters WHICH election-security bill we promote. We need the #SAFEAct, which already passed the House. Langford’s & Klobuchar’s Secure Elections Act wld give fake security. Thread. 1/

Jennifer Cohn
@jennycohn1
“Congress has poured hundreds of millions of dollars into election
technology since 2016, but w/o required cyber security standards, a
huge portion of that money is going...towards...systems that are not much better than the insecure systems they are replacing.” - @RonWyden 1/

Link to the quote in post 1: congress.gov/congressional-… 2/
No more blank checks from Congress! Any further allotments must include minimum cybersecurity standards, including #RiskLimitingAudits for every race & a ban on hackable machine-marked summary cards from barcode (and/or the dangerous new “hybrid”) ballot marking devices. 3/
Read 9 tweets

Jennifer Cohn
@jennycohn1
The #SAFEAct, which @HouseDemocrats just passed, would:

Here’s a detailed thread about the #SAFEAct. Pls reference these key provisions when asking the Senate to pass the Act. Thank you!

2/ Graphic by @ArtistsPo!
3/ Here is a more detailed and sourced thread explaining these key terms and why they are important. TY.

Jennifer Cohn
@jennycohn1
.@senatemajldr: We need:
#HandMarkedPaperBallots,
#RiskLimitingAudits, & a ban on barcode voting, hybrid voting (machines routing paper ballots under the printer head after they are cast), & on remote access to election equipment. Bring the #SAFEAct to a vote NOW. 1/

2/ Here is a more detailed thread explaining what these provisions mean and why they are so important.

3/ Please begin tagging members of @GOPSenate and asking them to confirm that they agree with these election-security best practices. If they won't respond, please follow up. Please be polite. Thank you!
Read 4 tweets

Jennifer Cohn
@jennycohn1
Here are some talking points to promote the #SAFEAct, which @HouseDemocrats just passed. Let's help them get the word out that the Act would:
* Require #RiskLimitingAudits
* Require #HandmarkedPaperBallots as an option for all voters
* #BanBarcodeVoting
* #BanHybridVoting
1/
* #BanRemoteAccess
* #BanInternetConnectivity
2/
3/ Here is a more detailed thread explaining why these key provisions are so important.

Jennifer Cohn
@jennycohn1
This is a major victory bc it means we are successfully exposing the recklessness of rejecting #HandmarkedPaperBallots in favor of machine-marked summary cards from vendors’ insecure “universal use” barcode ballot marking devices & hybrids, which the #SAFEAct would ban. 1/

It also shows that we have successfully exposed as unacceptable ES&S’s installation of wireless modems in election equipment, which it began doing in 2015. This too would be banned under the #SAFEAct. 2/
Yes, I get that McConnell may not bring it to the floor. But we would be negligent to not even try. So we will try & in doing so educate a TON of people—include decision makers at the state and county level—about the election-security best practices embodied in the Act. 3/
Read 7 tweets

2/ Here’s a link to the #SAFEAct and a screen shot of the amendment that bans barcode voting. rules.house.gov/bill/116/hr-27…

3/ #BarcodeVoting refers to hackable machine-marked printouts with text & barcodes marked by insecure ballot marking devices like the ES&S ExpressVote & ExpressVote XL. The barcode, which humans can’t read, is the only part counted as your vote. This is banned under the #SAFEAct!

Jennifer Cohn
@jennycohn1
OMG. 🔥 In 2018, North Carolina’s Election Board was found to have exposed voting system master passwords on the public internet for an unknown period of time!
Thread via @VickerySec
#HandMarkedPaperBallots #RiskLimitingAudits #BanBarcodeVoting #BanHybridVoting #ProtectOurVotes

2/ Here's the text of the #PAVEAct. It expressly requires that jurisdictions give voters the option to mark their ballots by hand. But it does not specify that this option must be provided at the polls (in addition to allowing vote by mail). I wish it did. wyden.senate.gov/imo/media/doc/…
3/ Still, for jurisdictions that use precincts or polling centers, that is the more or less the practical effect of the provisions mentioned in post 1 that ban barcode voting systems, "hybrid" voting systems, and touchscreen voting machines.
Read 31 tweets

Lynn Bernstein
@bernstein_lynn
Being a curious test engineer, I decided to see if the ink printed on the ES&S barcode ballot summary cards could be erased. The eraser from #2 pencil does not work, but a white eraser does! @DHSgov @CISAKrebs @MarilynRMarks1 @ronwyden @VotingVillageDC @maddow @MaddowBlog
The ES&S ballot summary cards can easily be erased and will most likely fade over time. I directly asked an ES&S representative if this was thermal paper and if the ink could fade and was told no. @jennycohn1 @philipbstark @mikefarb1 @jpanzer @amyklobuchar @VotingVillageDC

Jennifer Cohn
@jennycohn1
How about candidates commit 2 demanding #handmarked #paperballots & #RiskLimitingAudits & that campaigns independently compare precinct results & reported results? Speaking of which, did ur campaign ever make that comparison? I discussed w/ ur campaign manager who won’t say. 1/

He has gone completely dark. Your supporters deserved for your campaign to conduct some basic due diligence to protect their votes. 2/
It isn’t too late. You could still make this comparison. If you don’t expect it to change the outcome, go ahead and say that. Use your talent to show others that election integrity isn’t about ensuring a particular result; it’s about ensuring a legitimate process. 3/
Read 4 tweets

Jennifer Cohn
@jennycohn1
Call to action for all voters! To support the #PAVEAct, which calls for #handmarkedpaperballots and #RiskLimitingAudits, please cut and paste the script linked here into @Resistbot and send it to your senators! Thank you. #ProtectOurVotes

Jennifer Cohn
@jennycohn1
California voters! Election officials say that "paper" makes it OK to use hackable voting machines bc the paper can be audited. But UCB Statistics Professor @philipbstark says the audit procedure proposed in #AB2125 is UNACCEPTABLE. There will be a vote this Tuesday, June 19! 1/ 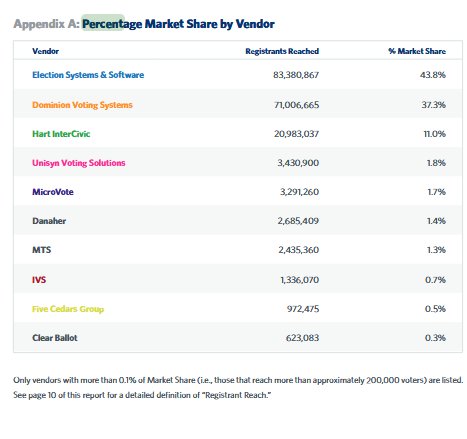 3. Royal blue shows the jurisdictions that use ES&S.
Orange is for Dominion.
Green is for Hart.
Pink is for is for Unisys.
Dark blue is for MicroVote. 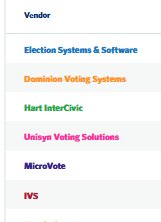 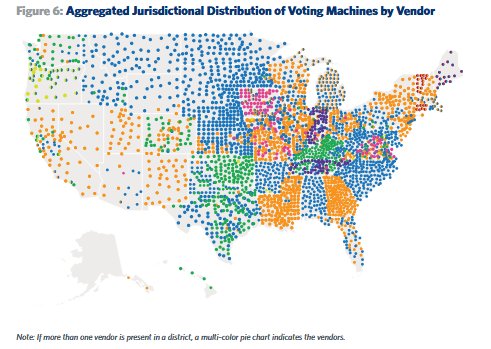