CSM
@usacsmret
, 32 tweets, 5 min read Read on Twitter
Tweet Share Email Embed
There is NO ‘CLIMATE EMERGENCY!’ - The Post & Email thepostemail.com/2019/08/12/the…
The National Oceanic and Atmospheric Administration (NOAA) database of state-wide extreme weather records, arguably the best of its kind in the world, shows that so far in 2019, only one extreme weather record has been set—the coldest day in the history of Illinois.
In 2018, the only records set were:

the largest hailstone in the history of Alabama
the most rainfall in a 24-hour period in Hawaii
the most precipitation in a year in Maryland, North Carolina, South Carolina and West Virginia.
In 2017, the only record set was for the fastest wind gust in California.

In 2015, only two records were set: the most precipitation in a year in Arkansas and the largest hailstone in the history of Illinois.
In 2014, only one record was set—the most rainfall in a 24-hour period in New York.
And so it goes, year after year as we move into the past with the occasional state record set, as one would expect due to natural climate variability
In the first 18+ years of the 21st century, only two states recorded their maximum temperatures—South Carolina in 2012 and South Dakota in 2006.
Contrast that with 1936, when 15 states set their all-time maximum temperature records.
Similarly, the NOAA’s updated coastal sea level tide gauge data (2016) shows no evidence of accelerating sea level rise.
NOAA data also shows that for almost 142 consecutive months starting on Oct. 24, 2005 and ending in September 2016, there were no major or moderate landfall hurricanes in the continental United States, the longest such period in records starting in 1851.
The climate scare is based on only one thing (aside from the drive for world socialism—see the conclusion to this piece)—computer model forecasts of what may happen someday if we do not restrict our use of fossil fuels to reduce CO2 emissions.
But these models do not work because we do not understand the science well enough to know what mathematical equations to program into the models.
Observations demonstrate that the actual rate of warming between 1979-2017 is three times smaller than that predicted by the average of 102 different climate models.
Let’s drill a bit deeper into this scandal.
Our government has financed more than one hundred efforts to model our planet for the better part of three decades.
They continue to do so even though none has been able to predict the known past or, after a decade of study, accurately predict what was to happen ten years later.
The problem facing scientists who study climate with no bias is that the public has no clue what mathematical models actually are, how they work, and what they can and cannot do. So, let’s try to simplify the complex subject of mathematical modeling.
Before we build buildings or airplanes, we make physical, small scale models and test them against the stress and performances that will be required of them when they are actually built.
When dealing with systems that are totally beyond our control, we try to describe them with computer programs or mathematical equations that we hope may give answers to the questions we have about how the system works today and in the future.
We attempt to understand the variables that affect the operation of the system. Then we alter the variables and see how the outcomes are affected. This is called sensitivity testing and is the very best use of mathematical models.
Historically, we were never foolish enough to make economic decisions based on predictions calculated from equations we think might control how nature works. Yet, today, in the climate sphere, we are doing just that.
All problems can be viewed as having five stages: observation, modeling (estimating mathematical relationships), prediction (how the system might work), verification (seeing a correct result) and validation (determining that the result was not a random occurrence).
Perhaps the most active area for mathematical modeling is the economy and the stock market. No one has ever succeeded in getting it right, and there are far fewer variables than those that determine Earth’s climate.
For many years the Wall Street Journal selected five eminent economic analysts to select a stock they were sure would rise in the following month.
Then they had a chimpanzee throw five darts at a wall covered with that day’s stock market results.
A month later they determined who did better choosing winners: the analysts or the dart-throwing chimpanzee. For many years the chimp won so often that they discontinued the contests.
We are not saying that today’s mathematical modelers would not beat chimps throwing darts at future Earth temperatures, but we will not object if you were to reach that conclusion.
While no one knows all the variables affecting climate, there are likely hundreds of them. Here are some important factors for which we have limited understanding:
1- changes in seasonal solar irradiation
2- energy flows between the ocean and atmosphere
3- energy flows between the air and land

5- the impacts of clouds

8- ability to factor in hurricanes and tornadoes

9- the impact of vegetation on temperature

12- solar system magnetic field and gravitational interactions.
Yet today’s modelers tell us that they can forecast the planet’s climate for decades or even a century in the future and want our leaders to manage our economies accordingly.
Dr. Willie Soon of the Harvard-Smithsonian astrophysics laboratory once calculated that if we knew all the variables affecting climate and plug them into the world’s largest computer, it would take 40 years for the computer to reach an answer.
The only emergency that matters is the threat to our way of life in the free democratic world placed upon us by climate alarmists, many of whom do not really care about climate or the environment in general.
Their goal is world socialism and complete government control of the peoples on our planet. It is an assault no less frightening and damaging than the wars that have plagued mankind since the dawn of time. It’s time governments stood up to them.
@threadreaderapp unroll
Missing some Tweet in this thread?
You can try to force a refresh.
Tweet Share Email Embed

More from @usacsmret see all

CSM
@usacsmret
If You're Not Grateful To The United States, Why Are You Here? thefederalist.com/2019/08/14/you…
Earlier this month, the Washington Post featured an op-ed entitled “I am an uppity immigrant. Don’t expect me to be ‘grateful,’” by NY University professor Suketu Mehta, who recently published a book arguing that “immigration is a form of reparations” for past American crimes.
Mehta accuses America of stealing “the futures of the people who are now arriving at its borders,” of causing many immigrants “to move in the first place,” and of “despoil[ing] their homelands and mak[ing] them unsafe and unlivable.”
Read 34 tweets

CSM
@usacsmret
My Son's Orientation At Virginia Tech Was Full Of Leftist Propaganda thefederalist.com/2019/08/14/son…
Parents, donors, and alumni, if you identify with this experience, it’s up to you. Our institutions have gotten this out of hand because most people are silent, too afraid of the social media harassment and bullying tactics of liberal activists and professors. Speak up.
First, send screen shots, video, or your story to Concerned Women for America at UniversityWhistleBlower@CWFA.org. We won’t disclose your name without permission, but we will tell your story.
Read 7 tweets

CSM
@usacsmret
If Black Lives Matter Why Take Away Their Guns? newswithviews.com/if-black-lives…
Very few Americans will remember the following historical facts regarding Black-American gun ownership in America:
The first task of the Democrat-controlled Ku Klux Klan was to disarm the black population in the South.
It was citizen militias that repelled white mobs who were attacking black neighborhoods in many Northern cities in the days before reconstruction. On at least two occasions, those militias were composed entirely of black gun owners.
Read 16 tweets

The scientists and computers at the National Oceanic and Atmospheric Administration were confidently predicting that the frigid weather would continue. The chilling pronouncement of NOAA's senior climatologist: 'The forecast is for no change.' "
- Time Magazine, 1977
Read 4 tweets

WE GOT YOU
@OFC_WeGotYou
[THREAD]
Mengenal Lebih Lanjut Ikan Bloop

🙌He stands up for what is right!

☑️Bill Nelson stood up for the kids after the shooting at Marjory Stoneman Douglas High School.

👉At the CNN Town Hall, he pointed out that Governor Rick Scott didn’t show up and even defended NRA money recipient Marco Rubio ($3,303,355 received from the NRA) for having the "guts" to show up and take criticism. A lot of it.

☑️Time and time again Bill Nelson stands up for the Environment. After the BP oil spill, Nelson co-sponsored the RESTORE Act, which directed money from BP fines to states affected by the Deepwater Horizon oil spill.

Morgan / @RealScientists
@realscientists
Buckle in, everyone. I'm about to take you on a journey through the 20th century into modern times, and I'll be talking ocean exploration all the way. Let's get right to it, because the last century has been a whirlwind of tech and discoveries.
Yesterday, I left you with Alexander Agassiz’s coral reef studies in the Pacific, which took 6 years and investigated areas previously too remote for most Western explorers. Today, we begin with the year 1900 and the first modern submarine.
In 1900 A.D., the US Navy accepted its first submarine, the Holland. This sub was built by New Jersey native John P. Holland and had two motors - an electric one while submerged, and a gas engine on the surface.

Ali Adair
@AliAdair22
Part 1. Why are the Kochs so involved in politics? Why are they funding this push for a Constitutional Convention? Why are they spending all this money? Yes, they have this agenda from the Libertarian 1980 platform that I made and people post. But most of those items are peanuts.

As a privately, held company, Koch Industries, Inc. does not have to report annual profits and revenues. According to Forbes Magazine at the fiscal end of 2016, Koch Industries was ranked #2 in “America’s Largest Private Companies” with an estimated worth of $100 billion.
Here's the list:
forbes.com/companies/koch…
Read 16 tweets

🌹 TheRoseLady 🌹
@The_Rose_Lady
THREAD: I've seen this picture often. It lists 66 programs that Trump has/may cut in order to fund the #TaxScam. I was thinking 66 programs - but what ARE those programs. I intend to go through each one and see just how we ALL (that means Trump's base) are effected. 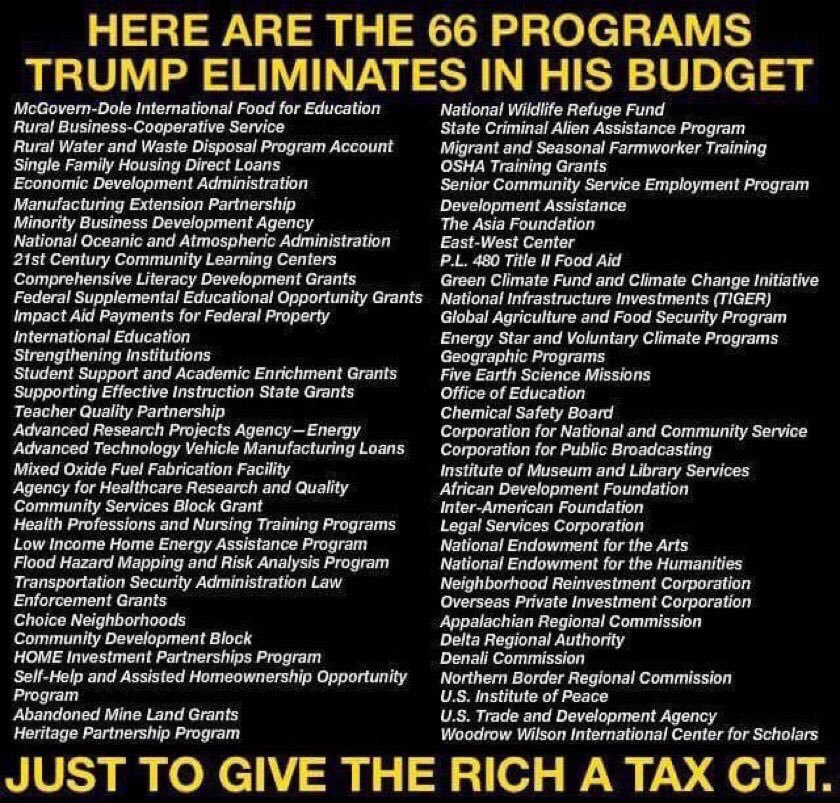 The McGovern–Dole International Food for Education and Child Nutrition Program helps support education, child development and food security in low-income, food-deficit countries around the globe. The program provides for the
donation of U.S. agricultural commodities, as well as financial and technical assistance, to support school feeding and maternal and child nutrition projects.
Read 41 tweets