Chris Geidner @chrisgeidner
, 5 tweets, 3 min read Read on Twitter
Tweet Share Email Embed
#SCOTUS grants no new cases in today’s orders. Here are the orders: supremecourt.gov/orders/courtor…
The court did GVR 2 cases—grant, vacate, & remand—asking lower courts to reconsider a ruling in a case in light of a recent #SCOTUS decision. While the one GVR is based off of a decision issued last week, the Fleck GVR follows several conferences & the Janus decision from June.

Here’s more on the Fleck case, which “challenges the constitutionality of North Dakota’s mandatory bar association laws under the First Amendment.” supremecourt.gov/search.aspx?fi…

Really interesting that it took them 8 conferences to GVR this. Thoughts on what was happening here? Kavanaugh wasn’t yet on the court for the first two conferences, so that explains them, but what about the next six? Some sort of negotiating/disagreement going on?
For now, #SCOTUS didn’t take up the case to rule on the bar fees question, but it did make the lower court do so. The move also makes it clear that #SCOTUS wants lower courts to consider if Janus changes challenges like this. Here’s my report from June: buzzfeednews.com/article/chrisg…
Missing some Tweet in this thread?
You can try to force a refresh.
Tweet Share Email Embed

More from @chrisgeidner see all

Justice Ruther Bader Ginsburg is not at #SCOTUS today for arguments, the public information office announced, but will be participating in the cases on review of the filings and transcripts from today’s arguments.
Here are this morning's orders from #SCOTUS: supremecourt.gov/orders/courtor…
Read 9 tweets

Chris Geidner @chrisgeidner
Before the night ends, I wanted to thank three Broadway shows that closed today for the incredible stories — and backstories — they brought to the stage and the larger world: Harvey Fierstein’s Torch Song, Once on This Island, and Head Over Heels. Thank you, all. 😊
I am a ridiculously privileged, white cis gay man who gets to see a ton of theater — in part, though, because I’ve prioritized that. I don’t drink, I don’t do much in terms of expensive travel, but I love theater, so that’s where I spend a good deal of my free time and money.
So, when you see me going off to shows, please understand that this is something I care about. I think it’s important, and I love being able to support the incredible people out there doing such amazing work. 💜 Keep it up.
Read 3 tweets

Chris Geidner @chrisgeidner
WALKING HOME. SORRY I AM LATE. #GoldenbGlobes
OK. I’m home. Just in time to see Gaga/Cooper. (I’m not sure I’m in the mood for this tonight, so, I might not be tweeting a lot.)
I’d be totally happy just rewatching The Favourite tonight, tho.
Read 41 tweets

Steve Vladeck @steve_vladeck
1. With @realDonaldTrump once again going after the Ninth Circuit (Happy Thanksgiving, I guess??), here's a medium-sized #thread on each of the five independent factual inaccuracies, analytical problems, and/or outright lies at the heart of his judicial temper tantrum:

1. Let's start with the easiest and most obvious flaw: The actual decision that has set off this tirade was by a federal district judge in San Francisco, _not_ the Ninth Circuit. Especially if he's relying on reversal rates (more on that shortly), that's a pretty key distinction.
2. As for the decision itself, the Executive Order the district court put on hold purports to redefine eligibility for asylum in a manner that is squarely inconsistent with the text of the relevant statute, 8 U.S.C. § 1158.

Odds are that _any_ judge would've ruled the same way.

Zoe Tillman @ZoeTillman
Judge Brett Kavanaugh's #SCOTUS hearings kick off this morning. Dems are furious at the number of docs being withheld re: his time in the White House under W. Bush. Republicans are defending the extent of disclosures. @chrisgeidner has been on it -->

The Kavanaugh hearing just got started and there's already chaos. Dems are interrupting Grassley as he starts to read his opening statement to protest the latest production of docs right before the hearing. Blumenthal is moving to adjourn. Grassley says they will proceed.
It began with Sen. Harris jumping in as soon as Grassley began, to say they had not been given the opportunity to review documents. Sen. Blumenthal pressed to adjourn. Now Sen. Booker is calling for time to debate the process.
Read 51 tweets

Paul Sherman @PaulMSherman
Coverage of the #SCOTUS's NIFLA decision is likely to focus on abortion rights. That's unfortunate, because it is a groundbreaking case that clarifies what was one of the most important unanswered questions in First Amendment law: whether licensing laws trump the 1st Amendment.
Here's the issue: For the last 80 years or so, the Supreme Court has separated our constitutional rights into two tiers: Those that get close judicial scrutiny, and those that get little or no judicial scrutiny.
Freedom of speech is one of the rights that gets close judicial scrutiny. The right to carry on an occupation is one of the rights that gets almost no judicial scrutiny. This raises a problem: What happens when these rights intersect, and people earn a living buy speaking?
Read 12 tweets

Along the way, #SCOTUS appears to overrule Korematsu, the decision that upheld the internment of Japanese Americans during World War II. "Korematsu was gravely wrong the day it was decided."

Justice Kennedy writes separately: "An anxious world must know that our Government remains committed always to the liberties the Constitution seeks to preserve and protect, so that freedom extends outward, and lasts."

A thread on the #GayWeddingCake decision, asking a simple question:

How can a gay guy support the Christian baker?

Let’s start with a scenario: I decide to get married. (Gulp)

To those that reject me, I offer grace, love, & patience. In my quiet moments, I feel pangs of sorrow.
Yet a wedding only requires me, my love, & an officiant. Maybe a witness.

I don’t have the right to force anyone to join. That includes an Orthodox Jew or evangelical Christian to officiate.

My right to wed doesn’t trump their right to a sincerely held religious belief.
Read 11 tweets 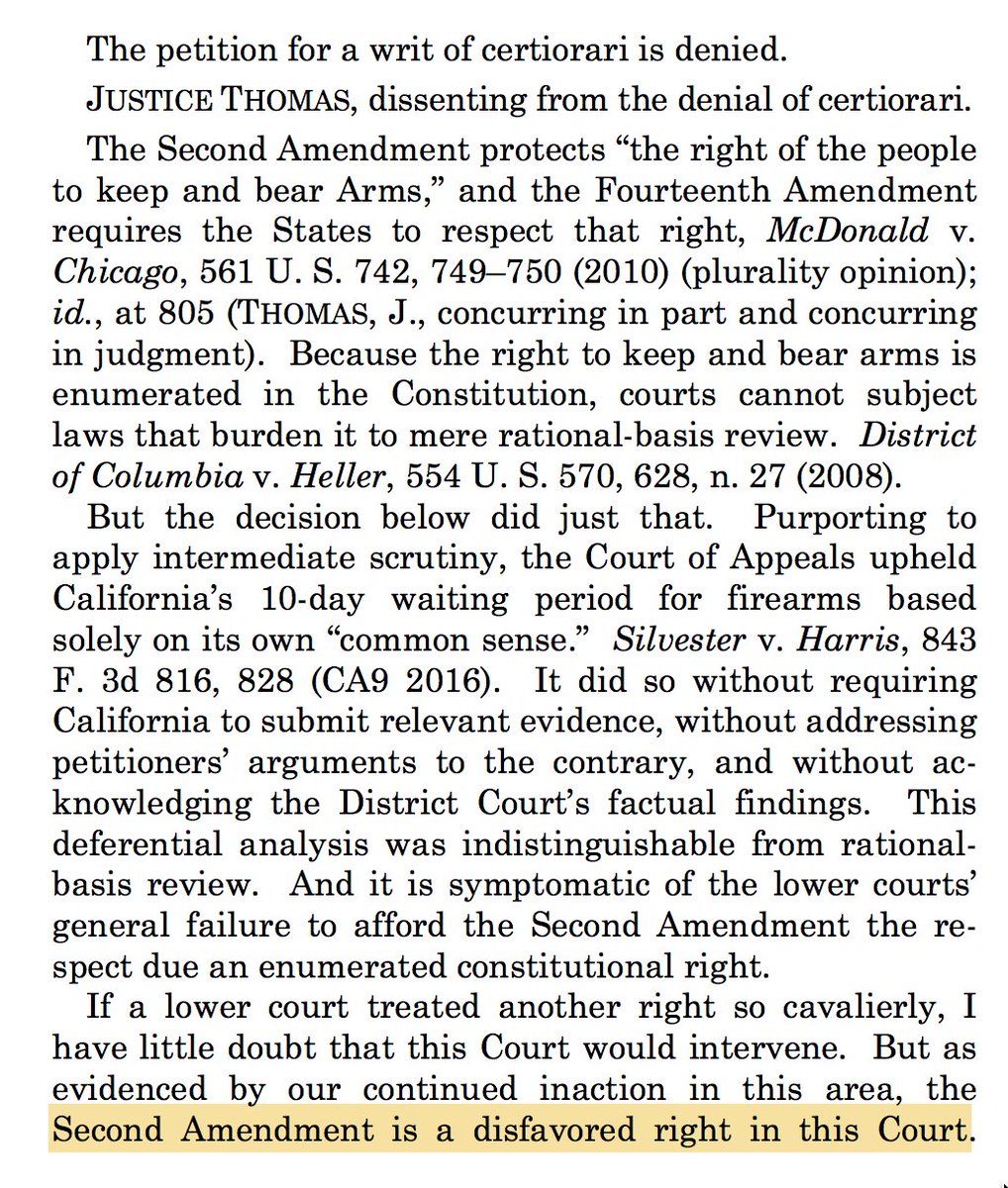 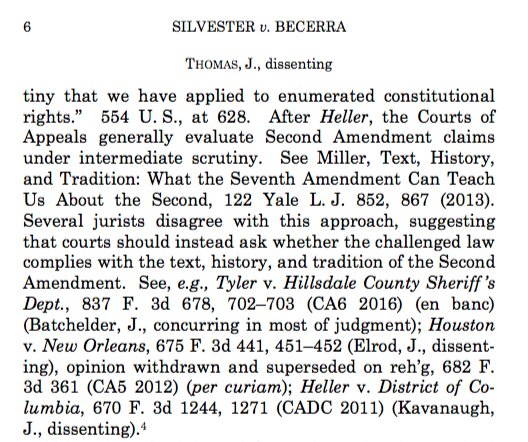