Tim Hogan
@TimInHonolulu
, 3 tweets, 2 min read Read on Twitter
Tweet Share Email Embed
Fun fact: The fugitive from US justice that @maddow @msnbc is talking about has an active @Twitter account. [@ ekimalptekin]. How nice. @FBISanFrancisco @FBIWFO @TwitterSupport
Here is something I wrote in my March 25, 2017, blog post about Aptekin related to the Gulan kidnapping plot:

"Who is Alptekin? Remember the Dutch firm Inovo BV that hired Flynn to spy on Gulen? Alptekin is Inovo's principal. . . .
. . .Ekim Alptekin is the son of Mustafa Sevinc Alpekin a close associate of Dogu Princek who is reported to be Russia's man in Turkey. A fascist secularist and racist enemy of the Kurds, Princek is reported to be a close associate of Assad and a Kemalist." 😎
Missing some Tweet in this thread?
You can try to force a refresh.
Tweet Share Email Embed

More from @TimInHonolulu see all

Tim Hogan
@TimInHonolulu
1. America works when we compromise. It ceases to work when we cease to compromise. Legal battles over Roe are battles over who makes the choice over your body: You or the state. The right wants the state to make the choices. The left wants to reserve them to individuals. Simple.
2. The right has packed a nine-person un-elected political branch that appears poised to invalidate the rights of millions of American citizens. Ecclesiastic based beliefs of individual groups not shared by all others, when imposed against the people's will and contrary to
3. universally held beliefs, are politically destabilizing.

If you don't like abortion don't have one. Allowing any religious group the power to impose its beliefs is unconstitutional and socially disruptive. It starts down the road to civil discord. The disrespect for
Read 8 tweets

Tim Hogan
@TimInHonolulu
1. I've been wondering about why Micheal Flynn fired the Covington & Burling firm. This could be the reason. Flynn's partner BIjan Rafikian is going to trial on July 15, 2019 and Covington & Burling are likely to be witnesses and the crime-fraud exception is teed up.
2. On the left is the fist page from the Covington & Burling's motion to withdraw from the Michael Flynn DC case. The two pages on the right are from Bijan Rafikian's EDVA case. That would explain why Flynn might have to cut the relationship.

3. Awkward to have your attorneys testifying as witnesses in the same criminal trial you're called to testify in too. Especially where their services are alleged to have been used to commit a crime. Awkward indeed. 😬
Read 4 tweets

Tim Hogan
@TimInHonolulu
1. Just watched a Biden person on @MSNBC get run through the meat grinder by @SteveKornacki who I have never seen take such an aggressive posture with any conservatives. 🤔 @JoeBiden has to have people ready to deal with the attacks he will get from faux lefties like Kornacki.
2. The Hyde Amendment was enacted in a time when, though highly charged, the debate could be handled by compromises. I don't have the time or the will to go back to review the evolution but a lot of this stuff came during threatened shutdowns. Yes it was wrong but it's
3. how politics works. What @JoeBiden has to be concerned about is that he and his staff did not prepare to deal with this stuff. It's not rocket science. It's simple retail political ground work to deal with all these issues and if someone asks a question with possible
Read 4 tweets

BrunoBarking
@Bruno062418
1/FINALLY decoded the Vive / Viva text, classified at the highest level. Suspected it, but was very sobering to see in 'black and white'. Need to see #Justice for these treasonous traitors (re-tweeting from friend's deleted account)

2/'Viva Le Resistance' was a redacted, i.e. HIGHLY CLASSIFIED text between Lisa Page and another FBI lawyer during the Crossfire Hurricane investigation. It appears unredacted in the June 2018 IG report AND is referenced by @DevinNunes. Why is this important/Why classified???

Downer has panicked and involved himself with the US/UK 'deep staters' in an attempt to impeach President Trump in the largest mass treason event in world history.

Could the reason for his panic be because he enables pedophilia?

Polly Sigh
@dcpoll
You're targeting a business owner from your official White House twitter account because you were denied service at her restaurant [GET USED TO IT] but you praised a bakery owner for refusing to bake a wedding cake for a gay couple.

It's just so predictably hypocritical of you.

As usual, @kfile has receipts.

Paula Chertok🗽
@PaulaChertok
NEW: Mueller team focusing on flow of money from Russia into 2016 campaign. 3 oligarchs stopped & searched when private planes landed at US airports, incl their devices. Question: Did Russia use “straw donors” to secretly & illegally funnel money to Trump cnn.it/2Gvf8U6
This is good reminder that while Trump waves symbols like sending National Guard troops to "secure the border," Mueller is dealing with the real national security issue at our border: Russians and Russian money distorting & corrupting our country. Trump doesn't want to stop this. 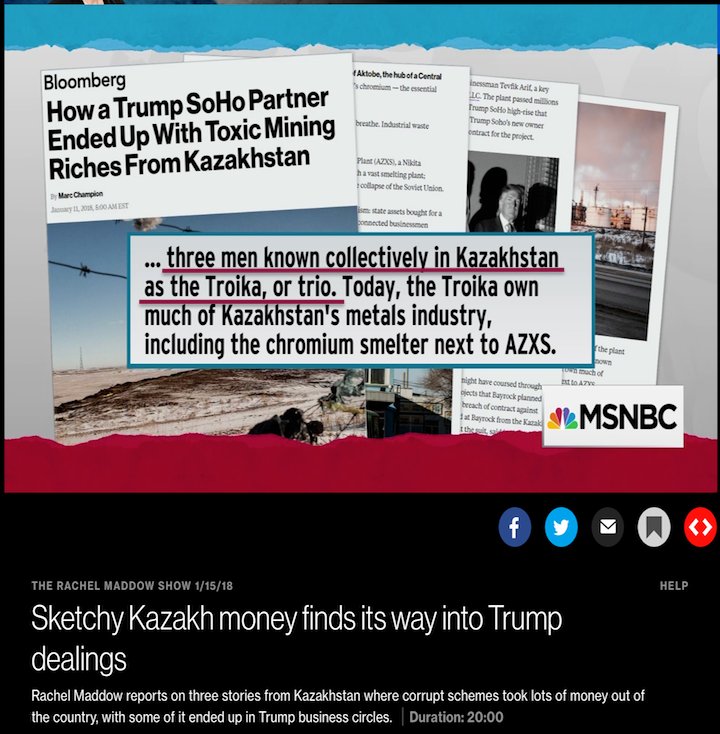 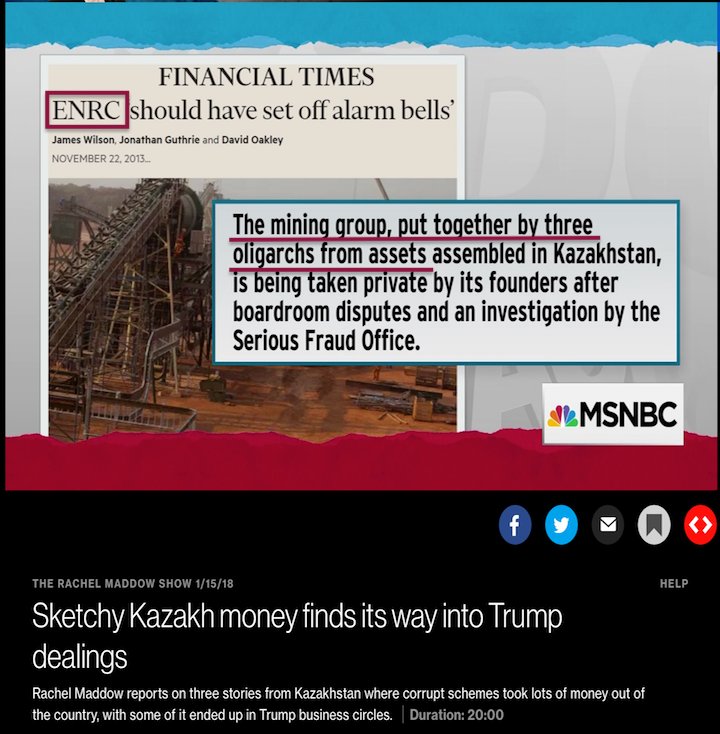 Corrupt Kazakh mining company ENRC is owned by Mashkevich & his 2 partners [AKA the Trio]. The "Trio" are members of Russian/Israeli Mafia & Mashkevich [strategic partner of Trump-Bayrock] is a mafia boss.
Source: 9/11 Commission Report
#Maddow @maddow