More from @KenThomasRoss see all

Emoluments Clause @KenThomasRoss
@jennycohn1 @loonyberg Yes, the board is full of Reaganite and George Bush cronies. I think it’s safe to say that the entire organization’s purpose is pushing electronic voting, and especially EDS, and thereby subverting democracy around the world.
@jennycohn1 @loonyberg The government funding you see from the State Department. The UN also funds it.
@jennycohn1 @loonyberg Electronic voting actually originated with George W. Bush’s Help America Vote Act (HAVA) of 2002, with the US govt helping to fund ($3.9B to start) the development and implementation of electronic systems. And yes, Republicans have mostly pushed it.
Read 16 tweets

#boycottfoxadvertisers
Procter & Gamble: @ProcterGamble – @Bounty @MyCascade @Charmin @Crest @DawnDish @Febreze_Fresh @downy @Gillette @GilletteVenus @OlaySkin @OralB @Pantene @Swiffer @Tide @Luvs @Pampers
#boycottfoxadvertisers
BTW, P&G may be so unresponsive because 91% of their shares are owned by investment groups, MM funds and insiders. So, if you want to explain it to them, you can contract (and boycott) the top three investors: @Vanguard_Group, @blackrock & @StateStreetGA
Read 3 tweets

☇RiotWomenn☇ @riotwomennn
GOP leadership on audio tape talking about Russia funding populist politicians to destabilize Europe & then they shift to how Putin could be doing it in the US.

Full transcript of Republican leadership acknowledging Trump was involved w Russian corruption and that the Republicans planned to keep it a secret.

Then, Republicans elected Kevin McCarthy as their Leader

washingtonpost.com/apps/g/page/na…
Numerous people tell me the same story - they are 100% certain that they heard the actual audio tape of McCarthy & Ryan but none can find a link to the audio or a newspaper article describing the audio being played in public

The transcript being read:

Here is how the Democrats who oppose her bid to become Speaker of the House for the second time stack up: thinkprogress.org/nancy-pelosi-h…

Rep. Jim Cooper (TN) has backed Trump around 40% of the time in his D+7 Nashville district: thinkprogress.org/nancy-pelosi-h…

He supported "Kate's Law" and a Constitutional balanced budget amendment, and voted present on a bill that supported ICE and denounced calls to abolish it.

Rep. Kurt Schrader (OR) has voted with Trump's agenda nearly a third of the time: thinkprogress.org/nancy-pelosi-h…

He voted to roll back Dodd-Frank financial regulations put in place after the Great Recession and make conceal-carry gun permits legal across state lines.

diane #ForAll straub @didikins4life
It is imperative we expose the ongoing #GOP narrative that uses Leader Nancy Pelosi as a lightening rod for misogynistic, ageist and partisan attacks and what motives and attitudes lie behind it. /1 #IStandWithNancy #GOPLies #DemocraticPrincipledLeadership

In order to get at that truth, it is vital for voters to meet Nancy Pelosi, understand her background, accomplishments and values as well as her vital importance to the Party of the People./2

Nancy Pelosi has consistently put her constituents first and foremost and as Speaker and Minority Leader she has served all Americans with the same commitment and intensity./3 #PrincipledDemocraticLeadership #IStandWithNancy

Natasia Champion @Freedom082016
1) @SaRaAshcraft or @FionaBa47662575 maybe someone can give me some insight. I recently was talking to my sister, shes the one who got me studying #SRA and the possibility of it influencing our past
2) she told me about an incident she had recently remembered after moving out of the house at 16 and having gotten a new phone # that nobody had.
3) shortly after getting this new number she started getting strange calls. A man with an evil intonation would call and harass her, call her terrible names. She had only recently remembered this happening, but at the time it was terrifying.
Read 17 tweets

☇RiotWomenn☇ @riotwomennn
GOP leadership on audio tape talking about Russia funding populist politicians to destabilize Europe & then they shift to how it could be happening in the US.

Where is the tape?

Did McCarthy report this to the FBI?

Cathy was present for this:

Carole Cadwalladr @carolecadwalla
Hold on. What? There's a new FBI indictment with....Paul Manafort & DANA ROHRABACHER! Not only Putin's favourite congressman but mine too! Time to pull out the photo they tried to delete...here with the one & only Mr Nigel Farage! 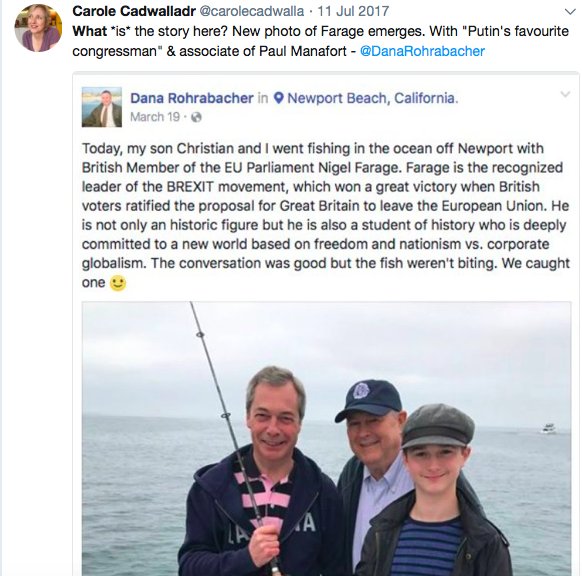 Brits: you need to get with Rohrabacher. This is his Mueller debut. But you know the schlubby guy who's just sitting at a bar in episode 1...?
politico.com/story/2016/11/…
Farage met Rohrabacher when he was out in California to work on Calexit. Which - fyi - was revealed to be a Russian influence operation. So. Nothing to see here. Nope.
nbcnews.com/news/us-news/f…
Read 4 tweets