Discover and read the best of Twitter Threads about #dworkinreport

Yesterday's indictment is a major signal that we're nearing the end of the #TrumpRussia prologue.

I interviewed @Mimirocah1 about the story which she said indicates that "prosecutors are putting the pieces together."

washingtonpress.com/2019/01/08/a-m…
Why is Natalia Veselnitskaya's link to the Kremlin so important?

2/
Natalia Veselnitskaya had been working on the Prevezon case for years, but in 2014 she involved herself drafting of the official response to the DoJ's invocation of a treaty for legal assistance.

She sent the evidence that she worked with the Kremlin to SDNY prosecutors.

Rick Smith
@RickSmithShow
Scott Dworkin: When you talk about a politician with leadership, or having a heart, or being poised, it seems like a dig at Trump. Trump sat there like a little toddler with his arms crossed, he didn't put his hand on his heart when the casket came in.
@funder @TheDemCoalition
Scott Dworkin: Obama's face when Trump came in... it wasn't a smirk, it was like, "You're so screwed. I can't wait for you to leave."
@funder @TheDemCoalition #DworkinReport
Scott Dworkin: I protested W every step of his presidency but when he spoke at the 9/11 Memorial he seemed human, not a monster, and when he broke down, it was like he felt responsible for everything that had happened.
@funder @TheDemCoalition #DworkinReport
Read 33 tweets

Grant Stern
@grantstern
I produced this exclusive three-part interview with @funder for the #DworkinReport about the new @VICELAND show: The hunt for the #TrumpTapes with @TomArnold

If you want to know why Mark Burnett is so angry at Tom Arnold that he wants to scrap just listen dworkinreport.com/2018/08/21/tom…
If you wanted to hunt the #TrumpTapes like Tom Arnold, you'd practically have to BE him, because of his 30 years of Hollywood ties in the same circles.

dworkinreport.com/2018/08/22/tom…
I'm personally looking forward to finding out what happened when he visited Russian mobster Felix Sater at his Long Island home.

We won't have to wait long. @TomArnold's program: The Hunt for the #TrumpTapes will premiere at 10:30pm Tue. on @VICELAND

Scott Dworkin
@funder
BREAKING: @TheDemCoalition just filed a criminal complaint against Brett Kavanaugh for perjury in Congressional testimony. I explain why we did it, in a new #DworkinReport podcast below.

dworkinreport.com/2018/09/07/thi…
BREAKING: @TheDemCoalition just filed a criminal complaint against Brett Kavanaugh for perjury in Congressional testimony. See the complaint below.

Scott Dworkin
@funder
I know it’s Labor Day weekend, but please remember @realDonaldTrump still has 500 refugee children locked up in cages he separated from their parents. And he hasn’t even tried to reunite them. Plus thousands died in Puerto Rico. Someone needs to be held accountable for all of it.
Listen to my interview below with a pre-med student who volunteers at the border giving first aid to refugees after leaving ICE prisons. The stories she tells are horrifying-ICE agents are threatening those who ask for medical help #DworkinReport #LaborDay
dworkinreport.com/2018/07/10/a-t…
Listen to my interview below, where a pre-med student who gives first aid to refugees at the border, reveals the fact some ICE agents are mentally and physically abusing refugee children. And leaving ICE prisons covered in lice. #DworkinReport #LaborDay

Rick Smith
@RickSmithShow
Scott Dworkin: It's almost a certainty that Mueller will try Manafort for the ten charges that ended in a hung jury in the previous trial.
@funder @TheDemCoalition #DworkinReport
Scott Dworkin: Manafort can't push back much; he's really disadvantaged at this point. He'd have to give up something absolutely crazy or he'll be in prison for the rest of his life.
@funder @TheDemCoalition #DworkinReport
Rick: Or, Trump could pardon Manafort.
Read 14 tweets

Wendy Siegelman
@WendySiegelman
I had the pleasure of speaking with Scott Dworkin @funder for the #DworkinReport about the #TrumpRussia story and my research on Emerdata, SCL/Cambridge Analytica and influence and social media companies - and thanks to @grantstern for the opportunity!
dworkinreport.com/2018/07/02/inv…
Here are the charts I referenced in the podcast - Social Media and Influence Companies Related to the Trump Russia Story
medium.com/@wsiegelman/so…
Emerdata Limited — the new Cambridge Analytica/SCL Group
medium.com/@wsiegelman/ch…
Read 5 tweets

The Prince, The President, The General, and a Fixer.

Five days ago, I tweeted this link to go into my first #TrumpRussia story about claims that a wealthy Qatari businessman claimed he paid off General Flynn.

The sworn claim itself, by a former Steve Bannon business partner, was incendiary.

That General Flynn had taken a payoff from a Qatari.

Also, his goal of bankrolling a white national political polemicist is an eye-catching headline, but not the story...

We are in a Constitutional Crisis right now.

The President is under a criminal obstruction of justice probe for trying to halt the #TrumpRussia investigation.

Congress is harassing the Deputy AG overseeing the investigation.

There's a 0% chance that charge earns 2/3rds of Senators.

There's a 100% chance it would be a political sham.

Deputy AG Rosenstein was forced to respond and did at a @Newseum event.

"The Department of Justice will not be extorted."

Did you watch the #Maddow Show hosted by @JoyAnnReid tonight?

You might've noticed a video clip of Donald Trump Jr. in Latvia discussing golf and Russia.

I broke the video story before #Election2016 after @funder @TheDemCoalition tipped me. 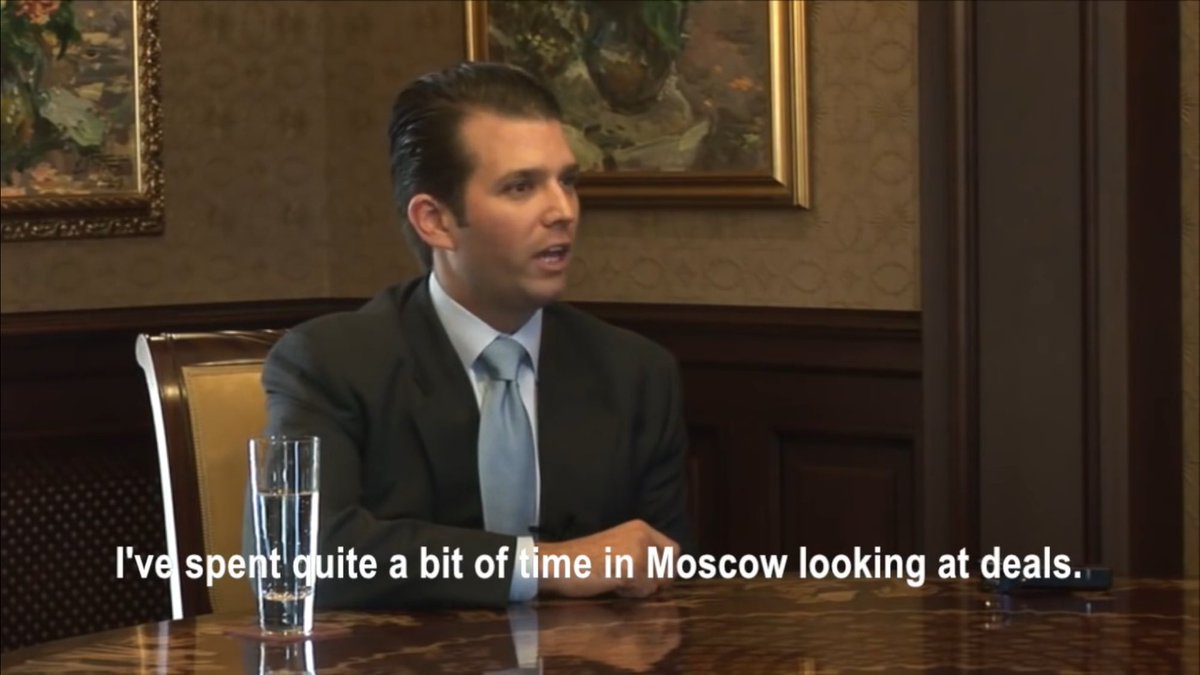 Neither @funder or I understood the totality of the information in Don Jr.'s interview but what we saw was shocking!

I wrote until very late on a Friday night not unlike tonight to break the scoop. It became our first major #TrumpRussia #TrumpLeaks story occupydemocrats.com/2016/10/15/new…
Don Jr. told his Latvian interviewers that he an. The Trump Org were seeking to do a Russian golf course development.

That raised our eyebrows because Donald Trump was rigorously denying all business contact with the country and Putin ties on the campaign trail. 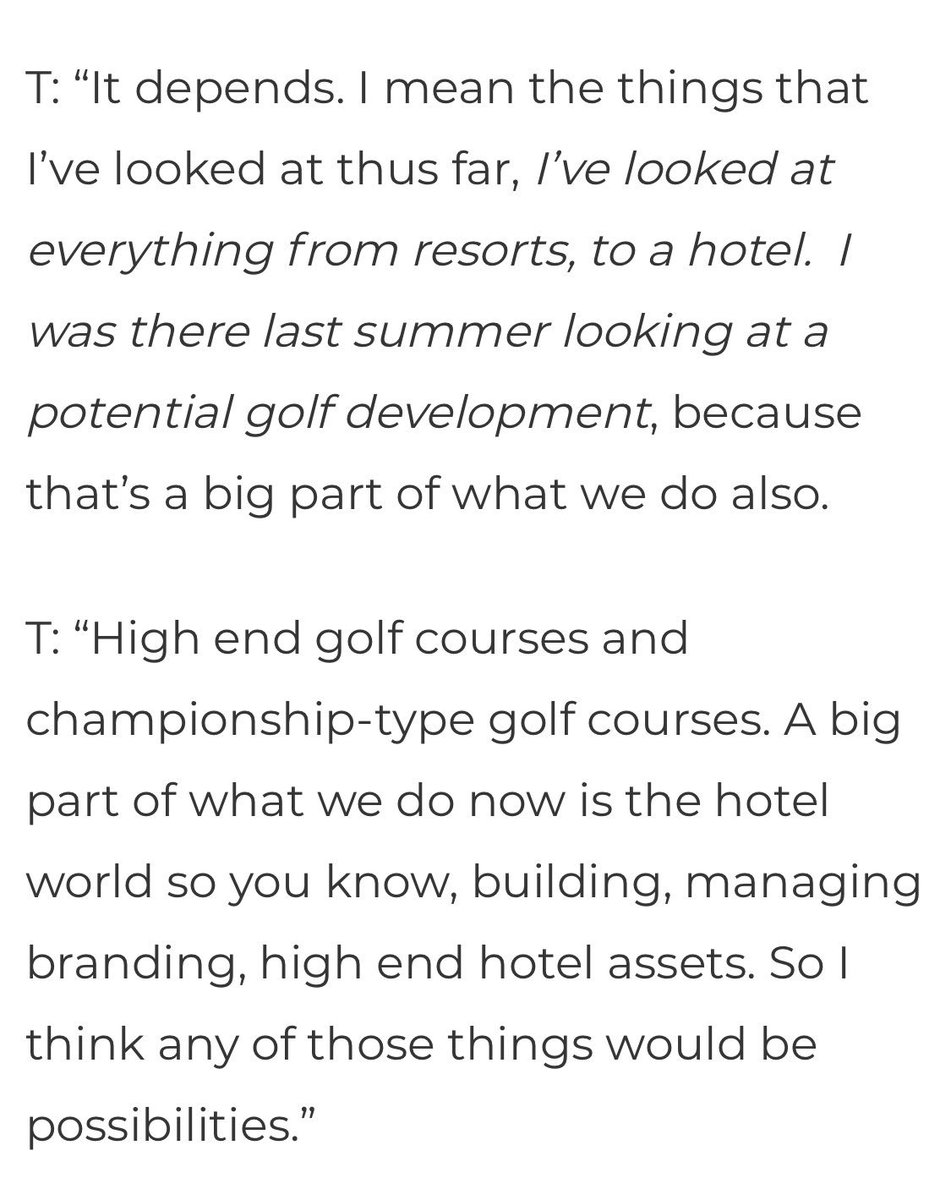