Letters of Note
@LettersOfNote
, 11 tweets, 3 min read Read on Twitter
Tweet Share Email Embed
Spike Milligan was born 100 years ago today which means I'm duty-bound to do a thread about him. #SpikeMilligan100
Spike Milligan once jokingly sent a telegram to his paranoid friend, Peter Sellers. It simply read, "IGNORE FIRST TELEGRAM."
Spike Milligan served in WWII. When his dad was informed by letter that his son had "been hospitalised," he wrote back: "How DARE you turn my son into a hospital."
Spike Milligan struck up a friendship with George Harrison that lasted for many years. However, much to Spike’s annoyance, George often lived up to his reputation as The Quiet One...

Full letter which is definitely worth reading: lettersofnote.com/2012/06/oh-chr…

Spike Milligan once asked Evelyn Waugh for his autograph...

Spike Milligan writes to "The Lady who answers the 'phone."

Read Spike's memoirs. Read 'Spike Milligan: Man of Letters' & 'The Spike Milligan Letters.' Read 'The Essential Spike Milligan.' They're all full of gold. And say hi to @goonchild4, his daughter, who is lovely. x
Missing some Tweet in this thread?
You can try to force a refresh.
Tweet Share Email Embed

More from @LettersOfNote see all

Letters of Note
@LettersOfNote
This politely devastating letter from Michael Wolff's lawyers to Donald Trump's lawyers really did hit the spot. Thanks to the many people who threw it my way. Let's take a look at some other Legal Letters of Note *gestures towards thread*

As all humans know, the greatest ever response to a legal threat was written in 1971, by Private Eye magazine. Concise, powerful, hilarious. A work of art.

IN 1945, the great James Thurber took the piss out of a lawyer friend who was keen to reprint some of Thurber's drawings. 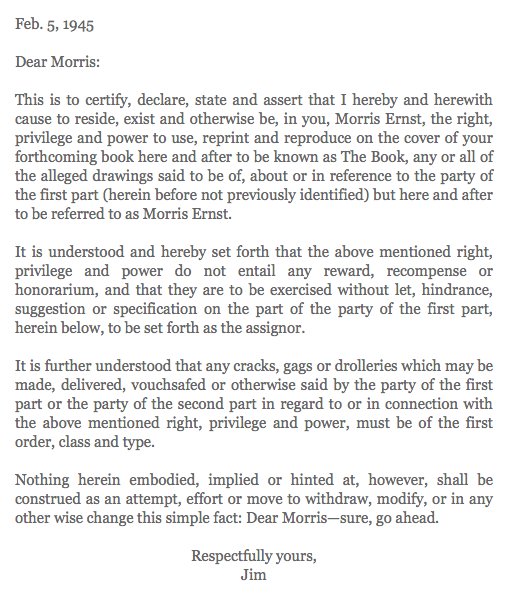 Daniella Greenbaum Davis
@DGreenbaum
Today is a very special day in my family. It was on April 15th, 1945, that my grandmother, Masha Greenbaum, then Masha Ralsky was liberated from the Nazi concentration camp Bergen Belsen
74 years ago today, she went from being enslaved, to being free. She celebrates this day every year as her birthday
This year, the way the dates work out with the Hebrew calendar, Passover is around the corner. The year she was liberated, Passover happened first. At seder, jews sing a song called “avadim hayinu”- we were slaves
Read 37 tweets

107 years ago today the White Star liner Titanic was on her maiden voyage from Southampton, UK, to NYC. She was 882.5 feet long & one of the most luxurious ships ever built. Her passengers were elite of elite & even 3rd class travelers knew this was special

The building of #Titanic at Harland & Wolff shipyard in Ireland was major event. Here is one of her anchors.

Moss Robeson
@mossrobeson__
45 years ago today, delegates arrived at the Capital Hilton hotel in Washington DC for Day One of the 7th annual World Anti-Communist League (WACL) conference, the first to be hosted in the United States. #thread

The event was officially hosted by the American Council for World Freedom (ACWF), which had just elected Phyllis Schlafly's husband its new president. As an important member of the ACWF, Lev Dobriansky had a substantial role in organizing the conference.

So 17years ago we were woken by police at our door. My elder bro (1yr diff) had committed suicide. I rang his house to find police at the other end of the line

Few hours later we drive to London in 2 cars to check out the scene, 1 car is needed to bring back his belongings

We arrive & his flatmate is a complete wreck. I had been ready to bang him out, suspecting foul play. But when 2/
I saw him I knew there was no chance in the world he did it. He was in complete shock, couldn't stop crying, shaking etc He had found the body hanging & ran & sat in the middle of the road.

So we go to the house, find a suicide note & a 1st attempt note in the bin. Note read,3/
Read 9 tweets

Oloye Akin Alabi
@akinalabi
Years ago, I used to say the best time to have money is when you’re young and can enjoy it. Now, I’ve realized that you need money more when you are older. Kids, retirement etc. Don’t be desperate. You don’t have today, you can have tomorrow & still enjoy life.

#thread of life.
There is no latecomer in the “success world” or “rich world”. Whenever you get there, you are welcome. You will enjoy your life and almost forget you ever suffered. It doesn’t have to be now and there is no prize for being the first person to get “there”.
When I was in my teens and early twenties & a bit of late twenties, I used to marvel at how some of my age mates were enjoying life. I felt I would never catch up and they were already ahead of me. Tah! There is nothing like that. Today, none of us remembers who succeeded first.
Read 7 tweets

Mike Stuchbery's Spooky Universe (of Terror)! 💀🍷
@MikeStuchbery_
If you’re having, had, or will have a bad day, spare a thought for the people of the Dutch city of Delft. Three hundred and sixty four years ago today, they experienced a shocking, unprecedented disaster - the Delft Thunderclap. THREAD 1/

Before we progress further, it’s important to understand that the 17th century wasn’t a fun time for many Dutchmen. A fair smack of it was spent fighting the hated Spanish, and the Little Ice Age was in full swing, playing havoc with the weather and harvests. /2

Still, the Dutch had developed a strong sense of self-identity, had a knack for business and there was a sense of optimism about things going forward. At a time of dynasties clashing and religious strife, the Netherlands was a relative beacon of modernity. /3
Read 19 tweets