A federal court filing in Los Angeles claims that agents of the nation of Qatar gave a payoff to convicted former Trump NSA, Gen. Michael Flynn, and also that he had accepted those payments. #TrumpLeaks

documentcloud.org/search/project…
A Qatari spy ring, with at least two individuals operating in America as unregistered foreign agents, stands accused of defamation in the federal lawsuit seeking $1.2 billion in damages. #TrumpLeaks

documentcloud.org/documents/4456…
A former Qatari General Consul let potentially serious information about Flynn slip while forcefully soliciting an American businessman’s help in obtaining contact with his former business colleague Steve Bannon...
...after #FireandFurybook came out and the Mercer family fired him from Breitbart, cutting ties. Former Consul Ahmed al Rumaihi offered to bankroll Bannon's American political websites and influence operations. #TheResistance
If Michael Flynn took payments from Qatar, because he's a former military officer, it could be a violation of the foreign Emoluments Clause of the U.S. Constitution. #TrumpRussia

Depending on the timing of any payments to Flynn, it could be a link to the #TrumpRussia dossier. The Dossier outlined a giant Russian oil privatization scheme in which Qatar Investment Authority purchased nearly 20% of the state-run oil company Rosneft.
thesternfacts.com/trump-russia-d…
Al-Hamadi says that he traveled to America on a B-1 business tourist visa representing the Qatar Investment Authority without diplomatic credentials. He should probably have registered under FARA for engaging in political action in America. #TheResistance
justice.gov/nsd-fara
However, Mr. Al-Hamadi's statements about General Flynn raised an even greater questions than just a failure to register: Was Flynn bribed? #TrumpRussia
Trump's convicted former National Security Advisor Michael Flynn was extremely active in the Middle East the year before he joined the Trump campaign. He personally traveled the region to push a pie-in-the-sky US-Saudi-Russian Nuclear deal. #TrumpRussia

occupydemocrats.com/2017/06/20/top…
Michael Flynn became an unregistered agent of a Turkish principal, which he admitted in his statement of offense. #TrumpRussia

politico.com/story/2017/12/…
Both of those countries are on the opposite side of the Syrian War from Qatar, who funded an offshoot of ISIS called the Nusra Front.

counterextremism.com/content/qatar-…
Former Qatari Consul Ahmed al Rumaihi started an influence campaign when he invested into a bball league on behalf of Qatar Investment Authority. He then pressed people to convince Bannon to let Qatar underwrite his American political activities (white nationalism) #TheResistance
The basketball league is headquartered in Los Angeles and co-owned by world-renowned entertainer @IceCube along with Jeff Kwatinetz. (but Bannon is 100% uninvolved) It just completed its first season last year. #TheResistance
The basketball league unwittingly got entangled with a group of Qatari nationals who approached them as sponsors and minority investors.
But they never paid. That led to a state-level arbitration case, and subsequently major federal defamation lawsuit. Suit was filed after Qatari Consul Ahmed al-Rumaihi and his partner manufactured a public relations crisis aimed at destabilizing the organization.
Little did Kwatinetz know 3 weeks before he was approached by the former Qatari Consul, his partner (a Qatar Investment Authority Director) had spent $2.5 million to hire former Republican Attorney General John Ashcroft. #TheResistance
bloomberg.com/research/stock…
John Ashcroft was contracted to use his FBI, Homeland Security and intelligence connections for his foreign principal, Al-Hamadi. This apparently led the Qatari to seek Kwatinetz's help as an agent of influence. Ashcroft sent the contract below c/o Al-Rumaihi.

The Qatari agent then proceeded to use his minority ownership stake in the basketball league, as a political influence operation to benefit the government of Qatar, and its international image during a regional conflict.

FARA violations are a criminal offense punishable by up to five years imprisonment. Persons who take political action on behalf of a foreign principal - like a corporation, government or political party - must register with the Department of Justice. #TheResistance
For example, Paul Manafort is facing charges for failure to register. Cooperator Rick Gates faced the same, which led to a plea bargain. Michael Flynn also faced the prospect of charges for failure to register under FARA, but Trump's former NSA agreed to cooperate. #TrumpRussia
Both Al-Rumaihi and Sabi acted to advance the interests of Qatar. Neither registered with the Department of Justice under FARA. #TheResistance
Qatar has ramped up its lobbying efforts dramatically ever since the UAE and Saudi Arabia declared a blockade against the peninsular country of 300,000 residents. The gas-rich nation owns more property in London than the Queen of England.

motherjones.com/politics/2018/…
Trump recently met with the Emir of Qatar and reversed his position on them 180 degrees, calling them a good ally. This is AFTER the Qatar hired a Trump-connected, Florida-based lobbying firm.
America's foreign agent registration requirements have been wildly underenforced over the years

vox.com/the-big-idea/2…
Even still, FARA managed to ensnare a Congressman in 2010, and an employee of the Russian bank that met with Jared Kushner during the transition period. #TrumpRussia

justice.gov/opa/pr/russian…
Special Counsel Robert Mueller singled out one House Republican in his indictment of Russia’s Internet Research Agency. It was Rep. Dana Rohrabacher, who is known as Putin’s favorite congressman. They know each other well. #TrumpRussia

washingtonpress.com/2018/02/23/mue…
Over 60% of the foreign agents registered with the DoJ have been filed late. #TheResistance

pogo.org/blog/2016/09/j…
But foreign agents have swarmed about America recently, whipping up political strife with useful idiots. #TrumpRussia vanityfair.com/news/2017/09/f…
By paying off pro-Russia Republican Congressmen and…

If Qatar did payoff Michael Flynn, there could be vast national security implications. It could even jeopardize his cooperation agreement with Special Counsel Robert Mueller. #TrumpRussia #TheResistance
Read the complete sworn declaration below, where a Qatari agent says Flynn was bribed #TrumpRussia

More from @funder see all

What kind of plane is this?

Can anyone tell where this picture took place? Based on the ground, maybe?

I know it’s blurry but on a world map, where is this? Is it Canada?

Scott Dworkin @funder
Its been a while since I’ve gone on a rant, but I got something to say. Please RT. Brett Kavanaugh has no place on the Supreme Court. He’s credibly accused of sexually assaulting multiple women. One even thought he might accidentally kill her. Think about that. #WithdrawKavanaugh
Republicans offer the same thoughts and prayers response for survivors of sexual assault, as they do to victims of mass shootings. They’ve literally done nothing tangible to actually protect anyone. They even tried to cover up for Kavanaugh. This is unAmerican. #WithdrawKavanaugh
Kavanaugh’s attitude with Senator Klobuchar where he acted like a fourth grader, should be enough to disqualify him from ANY bench. This is not a judge. This is a Fox News pundit. The worst nominee for the Supreme Court in US history. And unqualified for it. #WithdrawKavanaugh
Read 4 tweets

Scott Dworkin @funder
BREAKING: @TheDemCoalition just filed a criminal complaint against Brett Kavanaugh for perjury in Congressional testimony. I explain why we did it, in a new #DworkinReport podcast below.

dworkinreport.com/2018/09/07/thi…
BREAKING: @TheDemCoalition just filed a criminal complaint against Brett Kavanaugh for perjury in Congressional testimony. See the complaint below.

Grant Stern @grantstern
If you just watched the end of #Maddow she recapped Michael Flynn joining a foreign lobbying firm and un-joining it this afternoon.

This *** THREAD *** explains the #TrumpRussia connection between Flynn and Stonington, owned by a Qatari registered agent.

In May I reported that disgraced former Trump NSA Gen. Michael Flynn was targeted by a Qatari spy ring who said that he "took their money."

washingtonpress.com/2018/05/11/a-q…
I found a video just a few days later showing that Flynn was at Trump Tower when the Foreign Minister of Qatar went there for a meeting.

Michael Cohen escorted the group to the Trump Transition offices.

The Prince, The President, The General, and a Fixer.

Five days ago, I tweeted this link to go into my first #TrumpRussia story about claims that a wealthy Qatari businessman claimed he paid off General Flynn.

The sworn claim itself, by a former Steve Bannon business partner, was incendiary.

That General Flynn had taken a payoff from a Qatari.

Also, his goal of bankrolling a white national political polemicist is an eye-catching headline, but not the story...

Jed Shugerman @jedshug
THREAD/Timeline on the significance of #Qatar as alleged intermediary between Russia and Trump through Dec'16 Rosneft sale (from #SteeleDossier, revelations about Qatar-backed $184M loan to Kushner, and now from @MichaelAvenatti). 1/

2/ This timeline builds on the piece I wrote in March about Kushner and Qatar: #SteeleDossier alleges that in Summer 2016, Russia made a deal to sell 19% of fossil fuel giant Rosneft, then secretly funnel commissions to Trump insiders in exchange for sanctions relief...
Dec.1,'16: Flynn & Kushner met Kislyak at Trump Tower, propose a secret link with Kremlin thru Russian embassy.
Dec.8: Russia sells 19% of Rosneft to Qatar.
Dec.12: Today's allegation from @MichaelAvenatti: Qatari diplomat met Cohen & Flynn. Coincidence?
slate.com/news-and-polit…
Read 14 tweets

He bragged about a payoff to Gen. Flynn.

He enters around 7:38 and lingers until going upstairs with Michael Cohen at 7:42

Let me explain how Paul Manafort's #TrumpRussia indictments are rolling rapidly from election inference into a replay of the Jack Abramoff scandal, but on STEROIDS, involving the secretive sale of American foreign policy for dark money. 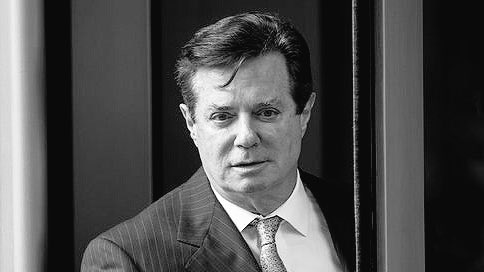 Manafort and Gates lobbied in the US for Kremlin-linked oligarchs & political parties for a decade, but before their scorched earth, divisive GOP politics inflamed a regional war, they went on a secret diplomatic offensive on behalf of their client, kleptocrat Victor Yanukovych. 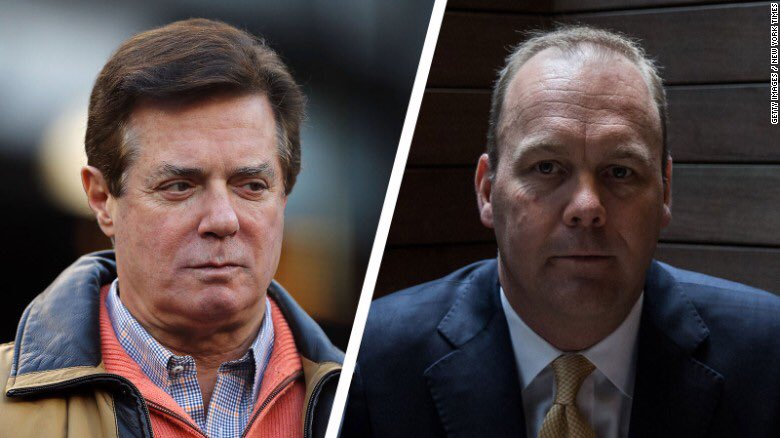 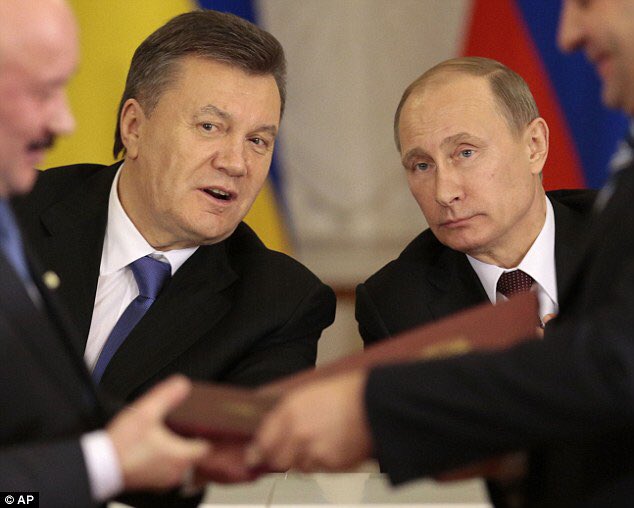 Manafort founded the European Center for a Modern Ukraine to be a secret western lobbying front group for Yanukovych.

For obvious reasons, his kleptocratic client had a perception problem, i.e. reality.

Manafort hid his involvement for years. 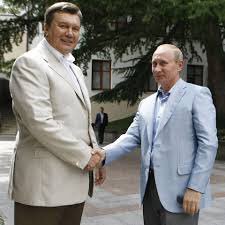