2/3 It also seems to be funneling cash towards “Brexit MPs”. The US corporation behind it was founded by Brendan Eich, who resigned from Mozilla after it emerged he’d been funding the anti-same-sex marriage movement in California.
theguardian.com/commentisfree/…

3/3 Brexiters (who, exactly?) seem to have found another way of siphoning money from right-wing US donors - & one that simultaneously enriches these donors. And what kind of ads will users of this browser be encouraged to watch? Not hard to guess... @carolecadwalla @MollyMEP
It's not just "#Brexit MPs". Brave Browser is also being advertised as a channel through which to fund the neo-Nazi group Nordfront (Nordic Resistance) in Sweden, and in Finland, where the group has been banned following violent attacks on anti-racism and gay pride demonstrators.

For the record, @BrendanEich of Brave Browser informs me that Nordfront has been removed as an affiliate, though it continues to advertise the browser on its site. No info on "Brexit.MP" is forthcoming. It would be interesting to see a full list of Brave affiliates.
Missing some Tweet in this thread?
You can try to force a refresh.
Tweet Share Email Embed

More from @Tom___Scott see all

Tom Scott #FBPE
@Tom___Scott
The appointment of Dominic Cummings - a man David Cameron described as a "career psychopath" - as Boris Johnson's senior adviser shows just how toxic Johnson's government will be. More on Cummings here:
badboysofbrexit.com/2017/12/22/dom…
Cambridge Analytica whistleblower @chrisinsilico on Dominic Cummings:
"He went around & found places he could launder money through to give it to AIQ so they could overspend...You cannot call yourself a Leaver, somebody who believes in British law, & win by breaking British law."
@chrisinsilico Why the overspending? Dominic Cummings has admitted Vote Leave used AIQ to place 1.5 billion ads like these on individual Facebook feeds in the days before the referendum. All completely under the radar of the regulator.

Why to vote Green #FBPE
@WhyToVoteGreen
The joint rubbishing of @carolecadwalla by #Marr & the #Brexit cheerleader Isabel Oakeshott is one of the most shocking things I've seen on TV.

Read Cadwalladr's superb investigative work & decide for yourself whether Vote Leave .EU & cheated.
theguardian.com/uk-news/2018/m…
.@CarolineLucas: "What these revelations show is that there is something rotten at the heart of our democracy...what I want to see is a proper investigation... it calls into the question the legitimacy of the EU referendum."m #Marr
.@CarolineLucas: calls for a #FinalSay: "It is not a second referendum - it's a first vote on the final deal...So many things were promised that have not come to pass"
#Marr
Read 5 tweets

Why to vote Green #FBPE
@WhyToVoteGreen
1. So @AndyWigmore of Leave.EU tweets investigative journalist @CaroleCadwalla to let her know she’s been "tagged” in a tweet from Russia’s embassy in the UK. Let’s have a quick look at the background & semiotics of this… <THREAD> 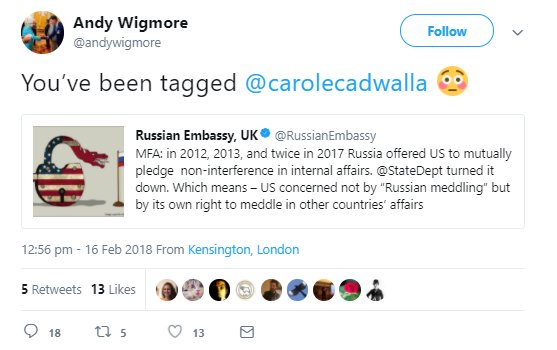 2. Carole has done great investigative work into links between Leave.EU’s Brexit campaign & Russia. Many of the same actors were working for both #Brexit & Trump – the far-right hedge fund billionaire Robert Mercer, Cambridge Analytica… theguardian.com/technology/201…
3. Andy Wigmore accompanied Arron Banks to a 6-hr meeting at the Russian Embassy in 2015, invited by a man Banks assumed to be a Russian FSB officer. They gave Ambassador Yakovenko the “inside track” on Brexit. It is not known what was offered in return.
buzzfeed.com/jimwaterson/ma…
Read 13 tweets

Labour was an anti-racist political party but then @jeremycorbyn became leader with his garbled world view of Israel, and like many of his fans, he can't differentiate from anti-Israel views & antisemitism

1: People like ALAN BULL a Holocaust denier were protected by @jeremycorbyn's inner circle because they thought he might stand a chance of winning a marginal seat

NB: his partner is now a councillor in Peterborough

2: ALAN MYERS @Uklabour council candidate was suspended for stating:"if you say anything against them they cry antisemitism & harp back to the holocaust to curry sympathy"

Has he been expelled from Labour for this form of Holocaust revisionism? Who knows? thenorthernecho.co.uk/news/15250825.…

Max Fisher
@Max_Fisher
YouTube’s algorithm has been curating home movies of unwitting families into a catalog of semi-nude kids, we found.

YT often plays the videos after users watch softcore porn, building an audience of millions for what experts call child sexual exploitation
nytimes.com/2019/06/03/wor…
Each video might appear innocent on its own, a home movie of a kid in a two-piece swimsuit or a nightie. But each has three common traits:
• the girl is mostly unclothed or briefly nude
• she is no older than age 8
• her video is being heavily promoted by YouTube’s algorithm
Any user who watched one kiddie video would be directed by YouTube's algorithm to dozens more — each selected out of millions of otherwise-obscure home movies by an incredibly sophisticated piece of software that YouTube calls an artificial intelligence. The families had no idea.
Read 15 tweets

Whitney Webb
@_whitneywebb
The Pentagon and Microsoft have co-developed a new "secure" election system that will be piloted in 2020, 2 states have already signed on as have more than half of all voting machine companies. My latest at @MintPressNews THREAD on why this is a MIC coup: mintpressnews.com/microsoft-elec…
First this thread is a summary. Please read the whole article. This election system is called "ElectionGuard", sound familiar? That's because it is part of Microsoft's ironically named "Defending Democracy" program, as is Neocon-backed Newsguard.
ElectionGuard was co-developed by Microsoft and Galois. Galois' only two investors are DARPA and the Office of Naval Research, so rly its sole investor is the Pentagon. Galois' chief scientist and founder used to be head of a DARPA office. Main clients? The govt and weaponsmakers
Read 9 tweets

Alex Sunnarborg
@alexsunnarborg
1/ [POLL & THREAD]:
What will be the next crypto asset added to Coinbase / GDAX?
2/ I actually asked nearly this exact same question about a year ago:

3/ Back then, voters thought it was the #1 most likely that a privacy focused asset like ZEC or XMR would be added next to Coinbase. This has not yet happened.
Read 17 tweets

Barbara McKenzie
@BarbaraMcK42
Just to be clear: barbaramckenzie.wordpress.com/2018/08/17/cli…
AGW alarmism is a globalist scam. There is no science behind it, and nature isn't obliging by warming up the world. So: data has to be manipulated

Apocalyptic scenarios have to be invented, whereby, although Greenland hasn't recovered from the Little Iceage, the Poles are going to melt away any minute.
Read 5 tweets

Bob Dee
@bobdeeuk
@DMiliband @tom_watson But: this anti semitism row has gone too far. The IHRA definition examples too restrictive. 1. Can’t accuse Jews of disloyalty (to their state of residence): some MUST be disloyal. 2. Can’t compare Israel with Nazi Germany: not overall, but Israel treats Palestinians as inhuman..
@DMiliband @tom_watson 3) Can’t hold Israel to unique standards: no, just to the highest standards, what else? 4) Can’t call a Jewish State racist: but that is how Israel is behaving towards Palestinians. Let’s not criticise anyone for who they are - call them out for how they behave.
@DMiliband @tom_watson These IHRA standards are designed to shut down criticism of Israel, and they’re being heavily promoted by the interest groups concerned. Free speech that doesn’t incite violence must prevail - now we’re being blackmailed into abandoning that precious freedom.
Read 4 tweets