Discover and read the best of Twitter Threads about #Nope

Prof. Furlow's White Boards
@michelle_furlow
If you were teaching the class, what would be the most important topic that an introductory policing in class in 2021 should address?

Join me at noon, cst, to discuss

#CRJ201 #AmericanPolicing #MoraineValley
Good afternoon, Policing fans, critics, supporters, activitists, students, officers, rookies, and future men & women behind the badge. Today is an introduction to the topics we will be covering the next 16 weeks in American Policing

#CRJ201 #AmericanPolicing #MoraineValley
What brings you to our discussion today?

Civil War Humor
@CivilWarHumor
Oh, Chancellorsville. No CW battle is as frustrating. Hooker planted some good seeds, but everything #OTD in 1863 that could go wrong DID go wrong (except for, um, the aim of the 18th N. Carolina) cuz Stonewall’s flank march took the Union by surprise. Or so the story goes …

But even as a young Civil War "buff," my Trapper Keeper festooned with corps badges, I thought: “Oh, sure, Lee as Superhero again. How do 33,000 stinky dudes, knapsacks & guns a-clankin’, horses neighing, sneak up on an army without raising dust & alarm?”

Turns out, they didn’t.

At Chancellorsville, the Army of the Potomac experienced an almost unbelievable concurrence of Tough Luck, Brain Farts, Bad Weather, Buck Passing, Wrong Place/Wrong Timeism, and Not All The McClellan Washed Out Quite Yet. It’s almost as if Joe Hooker had Bad Karma or something.

444: The number 4 in the Bible represents times & seasons. In the book of Genesis, God created heavenly bodies on the 4th day... that is, the sun, moon, & the stars.☀️🌙⭐️

The sun & moon enable us to determine time & seasons.

With the position of heavenly bodies, we can discern night from day & the four different seasons experienced in the world. The four directions also find their basis from the Bible, that is, North, East, West, and South.
The number confirmations never lie though🤷🏻‍♀️😌 #ifYouKnowYouKnow

~Greg Pritchard, describing his first experience of @WillowCreekCC in 1983, in his 1995 book "Willow Creek Seeker Services", Chapter 1.
2/ "Credibility: Hybels seeks to be a reliable & trusted friend to a visiting unchurched Harry. He wants to be honest & sincere & show genuine affection for Harry. See chapter 8."

~Greg Pritchard, who I guess had the wool pretty much pulled over his eyes, in "WCSS"
3/ "An ironic Willow Creek Proverb expresses this same idea: 'Exhaustion in next to Godliness'"

Joseph Murray
@drjosephjmurray
Cpt Hall's #PledgeofAllegiance in #AmericanSignLanguage on #InaugurationDay has rightfully seized our attention. In this thread, I want to analyse where this came from, what we can learn from it, and what we should NOT learn from it. Read more on this longish THREAD 1/20
When Cpt Hall starting signing, social media exploded with deaf people seeing fluency in her signs and wondering, as @NeilMcD did with his CODA son, if she was also a CODA. And she is! CODAs may grow up with a national sign language as one of their family languages @codaintl /2

Cpt Hall seemed to decide on her own to use #ASL (remember, sign languages are not universal- they are as distinct as spoken languages. The @WFDeaf_org estimates 200+ signed languages around the world. And only 50+ have been legally recognized. wfdeaf.org/news/the-legal… /3
Read 21 tweets

yvette nicole brown
@YNB
I don’t normally disagree with @FrankFigliuzzi1 but today, I must.

It has ALWAYS been about white supremacy.

None of the previous white, male, homegrown terrorists have been just troubled souls.

They are not little lost boys or lone wolves.

They are radicalized terrorists.
This narrative that being troubled or poor is an excuse for murder or criminality is only extended to white men.

Black boys playing on playgrounds like #TamirRice are gunned down at 12.

#Nope #NopittyNope
I am not coming for @FrankFigliuzzi1. He’s a good dude. I like him.

But this skewed narrative that white supremacy and the mayhem, chaos and sadly death it causes being something just a few misguided lone wolves live by is not true or fair to their MANY victims.
Read 5 tweets

💙41 Days! ⚖️ Vote2020💙
@Spin2Knit
Donald Trump has revealed the depths of the country’s prejudice and forced Americans to reckon with a racist system, writes @DrIbram. 1/4 theatlantic.com/magazine/archi…
I kind of compare the Trump presidency to my colon cancer battle.
I thought it was just going to be something simple and easy to deal with when I was first diagnosed. You know... in and out of surgery and back to work in a few weeks after that.
#NOPE Boy was I ever wrong! 2/4
As the details began to play out, I soon discovered I was in a battle for my life! I am alive, but I've been left with a HUGE range of scars and disabilities that I may not every get past or recover from.
Same with the Trump presidency! 3/4
Read 4 tweets

♥ Elsie Escobar #ShePodcastsLive
@TheElsieEscobar
THREAD: Redressing my words 👊🏽 I’m not a fan of supposition & choose to acknowledge unconscious bias when I *see* it. PLUS I tend to lead w/ ❤️ - 90% of the time I discern, but 10%...ay ay ay...bueno. I diacknowledgege tho, it started with this tweet:

1/
And then I acknowledged that I didn't have all the facts. I was at home and triggered by my fellow podcaster cohorts in attendance at #Evolutions2020 and the posts that I saw.

2/
Background: @hernanlopez announced there was going to be this *new* Podcast Academy + awards, which to those of us that had been around for a bit sounded like The Academy of Podcasters, which was a thing for about 3 yrs occurring @podcastmovement

yvette nicole brown
@YNB
Real talk, I’m from Cleveland & everyone in my family was told that we were Erie on our grandmother’s side. I proudly told dang near everyone I ever met.

I was “six years ago” years old when @Ancestry told me #Nope!

Folks need to lay off @ewarren about that for real for real.
Further, I have checked black and Native American on a form before. Why? Because my family said I was part Erie and I was PROUD to be.

Who wouldn’t be proud to be a part of the Native American community?!

Again, I didn’t find out I wasn’t, until 2014.
ANYONE who can’t see or understand how this could happen and who INSIST on continuing to vilify @ewarren over this even after I and many others have shared that they too were told they were part Native American & BELIEVED it...

Your agenda is showing.
Read 5 tweets

Jennifer Shahade
@JenShahade
What “brilliant” move did I play in this 3-minute game as White?

Checked with the computer later and the prosaic Na4 is the best move.
Oops I meant Rb5 Qc7 Rxe5 f6 Nd5 Qc6 and there’s nothing to do
Read 3 tweets

Veronica McDonald🗣
@Purify_toast17
This is the deal:

Meghan was paying Bad Dad and her grandmother’s expenses.

Even though he doesn’t have much of a relationship with Toxic Jr or Hot Wheels, he would break them off some of Meghan’s money

Meghan gets engaged in 2017-2018. Hot Wheels and Toxic Jr. get greedy. They start coming after Meghan for money. Meghan pays them dust so they start running to the tabloids about her.
3/

Dad stays quiet because Meghan is still breaking him off some money.

Toxic Jr. rings up Meghan's lawyer for some dough, Meghan through her lawyers hit him up with the Mariah I Don't Know Him.
Read 18 tweets

DMonDemand 🐉 Ask me your storytelling questions!
@JoshuaBarbeau
Alright Twitterverse, listen up! I want to try something CRAZY. You and I, we're going to play some #DnD5e together. I'll be the DM, and all of you together will be the player. Each day I will post a new 24h poll. Your answers will determine what happens next in the story. 1/...
Should be fun, am I right? You'll all be like a hydra character, having one body but with many minds. The more people playing the game (number of votes), the more interesting the choices will be! Help us expand the hive of players by retweeting with the hashtag #TwitterDnd. 2/...
The goal is to connect with people in a fun and engaging way and give them a shared experience together. If I can also show new players how easy it is to get into #DnD5e so much the better. We'll try to keep it simple with traditional rules and see how far our hero can get. 3/...
Read 55 tweets

Barrack texted Rashid al-Malik, that he wanted M.B.Z., to intervene with Kushner, to push Mr. Barrack’s appointment as a special envoy to the Middle East.

Senior MI5 and FBI officials shared concerns about ‘our strange situation’ in 2016. #SamePlayers

Texts McCabe, & Jeremy Fleming, then MI5, now the head of GCHQ, reveal their surprise re outcome of the EU referendum, & notes it as “wake-up call”.

in August 2016, Fleming noted that members of the FBI and MI5 had “met on our strange situation”, a veiled reference to discussions about RU activities

Gigi Young
@mysticinthemoon
AATIP or the "Advanced Aerospace Threat Identification Program" is on the look out for hostile ET's ya'll!

While #ET's certainly exist it is unreasonable to take a public position that states they are threatening or positive. Et's, or inter-dimensionals are most certainly both and in reality it is up to us what we invite.

The quality of inter-dimensional ET we come in contact with is actually a mirror of our own society, That is how portals work, they are rooted in the collective mental and emotional energy of the planet.

Maggie
@MaggietheMezzo
It's been a little over a month since I got back from #LivingLaVidaLagos and even though I am still missing it like crazy (someone yell "like CRAZY!"), I feel ready to share some of my experiences; the good, the bad & the neutral.

Lagos, THANK YOU for a truly wonderful time ❤.
One of the best things that I did? I went to the opera 💃! Y'all, did you know there's opera in Lagos? And I don't mean 'good enough for Lagos' opera. I mean, proper, 'beautiful, well-trained instruments', opera! I watched #DonGiovanni at the #MusonCenter.
I also loooved Fela's Shrine. I actually went twice; on the day I arrived & again for #Felabration2018. You guys, it was so much fun! I ended up abandoning my people and going up front to dance with the King!

K. Louise Neufeld🦉⚖️🇺🇸
@ninaandtito
Dear @thedailybeast
A MENTION OF @LANNYDAVIS'S FARA FOR DMYTRO FIRTASH WOULD'VE BEEN GERMANE, AS A DISCLAIMER BEFORE YOU PRINTED HIS PROPAGANDA, YOU FUCKING IDIOTS.
How James Comey Covered His Ass and Elected Donald Trump thebea.st/2PjRPgc?source… via @thedailybeast
#FTFY 😘

Uh Buh Wuh Duz That Haz To Dooooooo With Comey?
Oh, um, how about, IT HAS EVERYTHING TO DO WITH EVERYTHING BECAUSE IT'S THE FUCKING RUSSIAN MOB AND THIS ELECTION WAS A RUSSIAN MOB COUP ATTEMPT ON THE UNITED STATES!?!?!?!
nbcnews.com/news/us-news/d…
Read 11 tweets

Sarah Mei
@sarahmei
Good news everyone! My flight is several hours delayed, so I’m going to have a beer and read this book and think ideas and tell you them

I started reading it previously, and below you’ll find a selection of the comments I wrote then.

In the spirit of what-the-fuck-else-am-I-going-to-do-for-four-hours, though, I’m going to start back at the beginning. 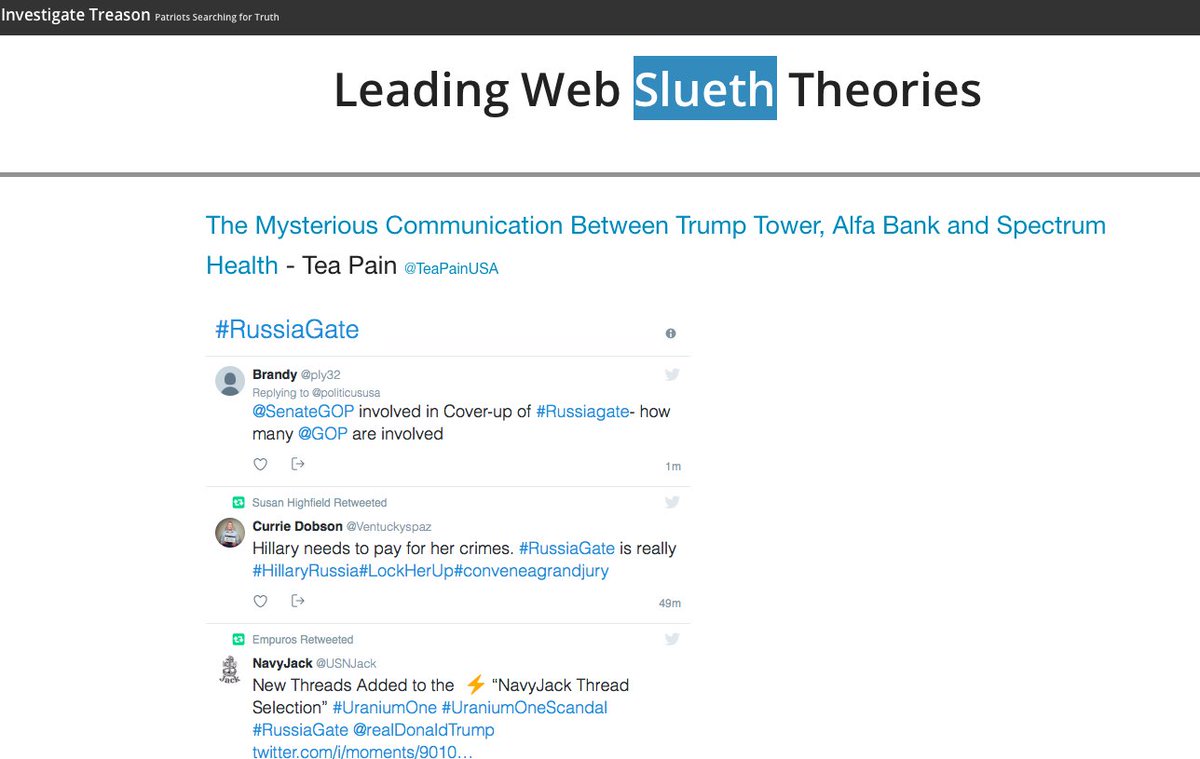 she links to @TeaPainUSA's blog on investigatetreason as source for info, then puts him on russiarevealedrevealed
web.archive.org/web/2017102319… 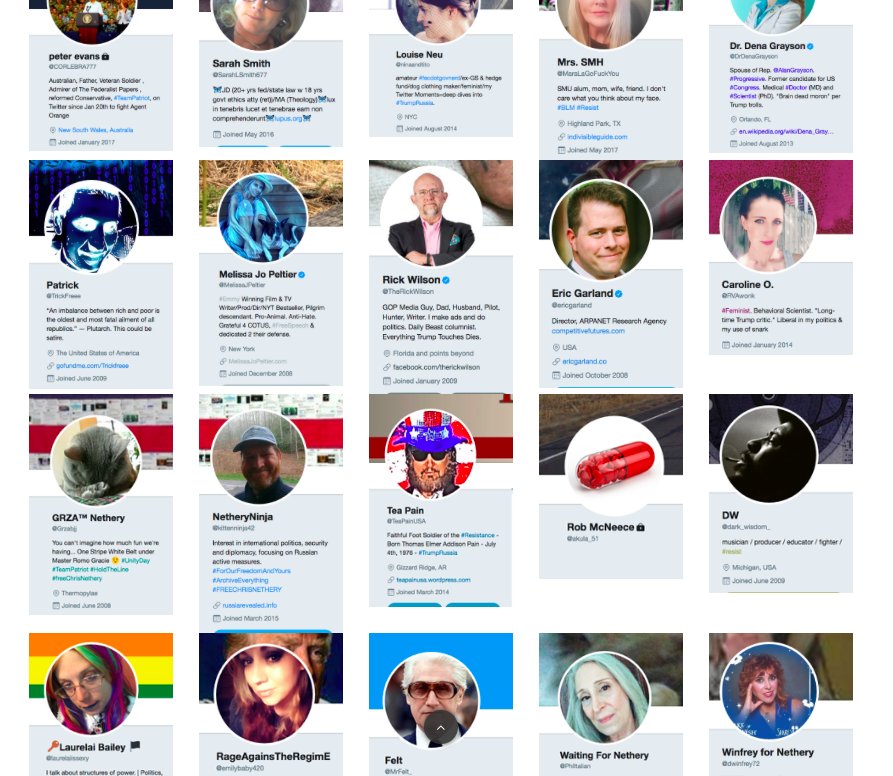