Discover and read the best of Twitter Threads about #GTMO

BOTH just 1km NNW of Guantanamo Bay Detention Camp. What are the statistical ODDS?
Anyone???

'Pre-commitment' for those having committed
/collaborated with the Guilty in
CRIMES AGAINST HUMANITY???

Steve Vladeck
@steve_vladeck
One of the cases #SCOTUS could add to its docket as early as today is DHS v. Thuraissigiam, which raises whether the Constitution’s Suspension Clause (which protects a detainee’s right to judicial review) applies to undocumented immigrants _in_ the U.S.:

supremecourt.gov/docket/docketf…
This is, potentially, a hugely important case for the constitutional rights of undocumented immigrants—and one of the issues on which there may be real daylight between Justice Kennedy (who in 2008 was the fifth vote to apply the Clause to #GTMO detainees) and Justice Kavanaugh.
And a cert grant is likely; there’s a clear circuit split between the Third Circuit (which held that the Suspension Clause does _not_ apply to undocumented immigrants subject to expedited removal in 2016), and the Ninth Circuit, which reached the opposite conclusion in this case.
Read 4 tweets

Steve Vladeck
@steve_vladeck
How messed up are the #GTMO military commissions? Read the DC Cir. reply brief on how the judge in the capital trial of the alleged USS Cole mastermind willfully concealed an insurmountable ethical conflict that now requires vacatur of all of his rulings:

One of the many troubling takeaways from the brief is how complicit the government has been in trying to obfuscate / otherwise downplay the judge's flagrant violation of various ethical rules here—& how much it might have succeeded but for what @carolrosenberg uncovered via FOIA.

And the timeline that comes through from the FOIA disclosures with regard to how Judge Spath's potential (& pending) future employment as an immigration judge could reasonably be feared to have influenced his decisionmaking as the trial judge in Al-Nashiri is, in a word, damning:

There was no good cause for defense counsel to withdraw (no proof of intrusion);

They were required to comply with the trial judge's orders despite their ethical objections; and

There's no absolute right to "learned counsel" in a capital military commission.
Here's my post from May explaining how we had gotten to this point:

Steve Vladeck
@steve_vladeck
For years, folks have been arguing that there’s no way to separate the #GTMO military commissions from the prior torture of the detainees now being tried.

Indeed, I don’t think it’s an exaggeration to suggest that one of the (many) factors in pushing the government toward trying these cases at #GTMO in the first place was concern over how the shadow of CIA torture might infect evidentiary rulings like this one—from civilian courts.
And assuming the government appeals this ruling to the Court of Military Commission Review (under 10 USC § 950d(a)(2)), that will presumably only further delay the (inexorable) pre-trial proceedings in these cases, perhaps substantially...
Read 3 tweets

@ScottyShopUSMC @HillaryClinton Hillary, do remember what @BillClinton transferred to the Alfred P. Murrah Federal Building? We do.
Checkmate...@POTUS literally blocked the Clinton’s back path to power.
Hindsight is a very powerful thing.
If history is edited & erased, how will we see? They want you blind.

@ScottyShopUSMC @HillaryClinton @BillClinton @POTUS I knew your “sugar daddy” Hillary.
He was a friend of the FAMILY.
He’s dead now.
Maybe it’d be better if you called Boss and negotiated the “perp walk”. NOW please.
Unless you want me to keep talking?

Steve Vladeck
@steve_vladeck
Per this @nakashimae/@missy_ryan story on the American #ISIS fighters being transferred stateside to be tried in civilian court, it’s not just that sending them to the #GTMO military commissions would be stupid; there’s also no legal authority to do so.

washingtonpost.com/world/national…
Under the Military Commissions Act, only an “alien unprivileged enemy belligerent” can be tried by the #GTMO tribunals:

law.cornell.edu/uscode/text/10…
US citizens can still theoretically be tried by military commission under World War II-era precedents, but (1) only for international war crimes; and (2) under different authority than the #GTMO commissions:

Steve Vladeck
@steve_vladeck
One aspect of Judge Kavanaugh’s jurisprudence that hasn’t gotten a lot of attention is his central role in the D.C. Circuit’s #GTMO jurisprudence, both with respect to detainee habeas cases & military commission appeals.

scholarship.shu.edu/cgi/viewconten…
As for the commissions, Judge Kavanaugh’s concurrence in Al Bahlul III is perhaps the most important defense of those courts’ power to try domestic offenses:

I’ve (rather vehemently) disagreed with his analysis, but there’s no doubting its significance.
To be clear, I think Judge Kavanaugh is immensely bright, talented, and qualified (even if he is a @Nationals fan). He’s an exceptionally gifted judge with whom I just (often) disagree.

I’m just putting this out there to help inform the conversation about his jurisprudence...
Read 3 tweets

Steve Vladeck
@steve_vladeck
The government has filed a response in #SCOTUS to our supplemental letter in Dalmazzi, suggesting that there is “some dispute” as to whether a military officer who retired from the Army can keep serving on the #GTMO Court of Military Commission Review:

Our position all along has been that military officers appointed to the CMCR (like Judge Herring) hold _two_ offices, & can stay on the CMCR even after leaving the military. It sure seems like the government’s saying that either we’re right or he’s no longer validly on the CMCR.
And if the latter is somehow true, that will just create more headaches for the #GTMO appeals court, where defendants could presumably then challenge any ruling in which Judge Herring participates going forward (and so the court would be down yet another judge)...
Read 3 tweets

Rosie Unmasked
@almostjingo
🗝 (1) Speaking of #GITMO or officially #GTMO it would appear there are indeed crumbs, lots of them. Guess who visited there in July? Sessions and Rosenstein 😆 #Qanon 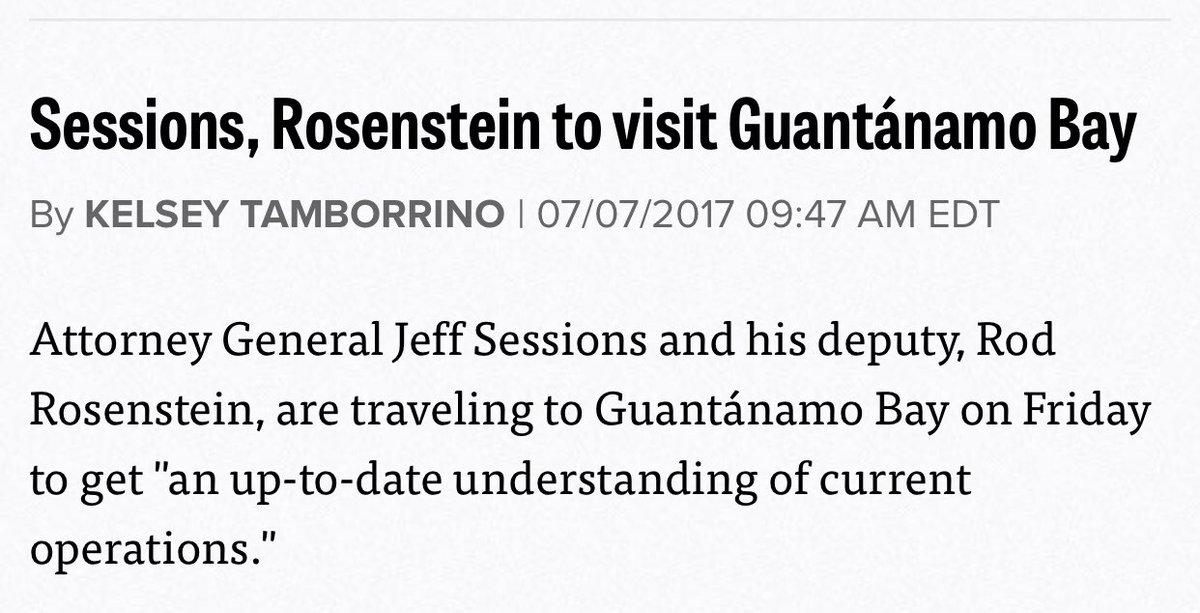 (2) In fact #Sessions thinks GITMO is a very fine place, with plenty of space and mentions we’ve spent a lot of money fixing it up. Who can argue with that? 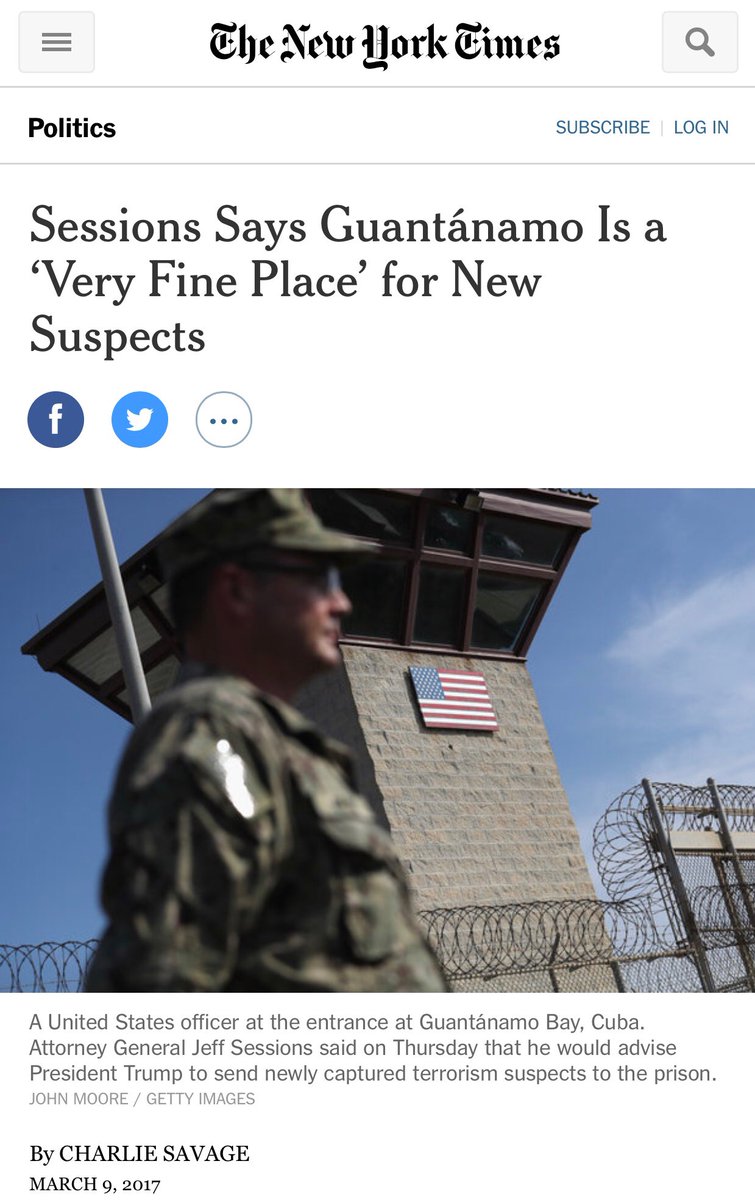 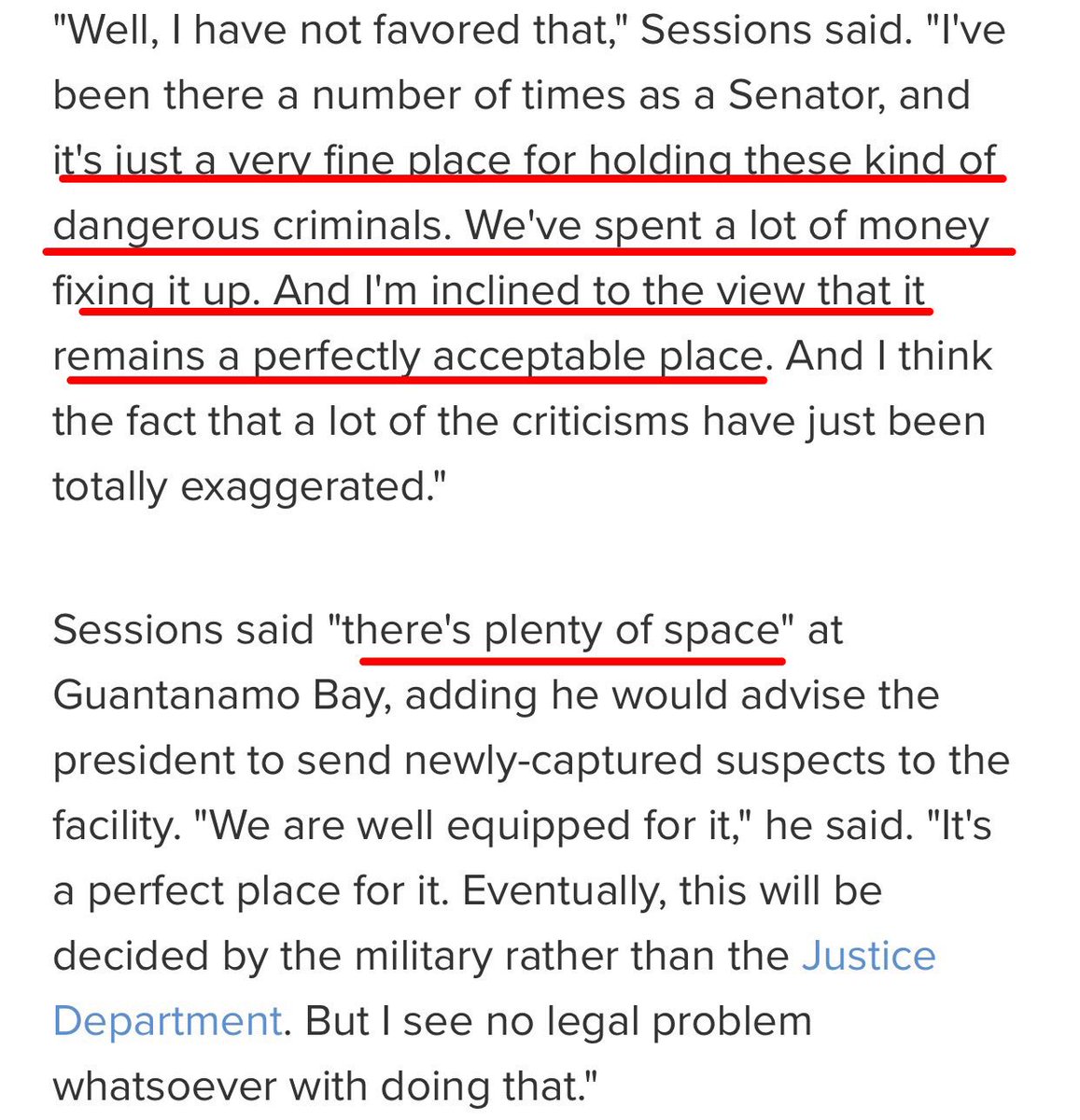 (3) Do you know who else is a big fan? Who used to run the place? Who fell out with O because he wanted to close it? That would be #GeneralKelly #breadcrumbs 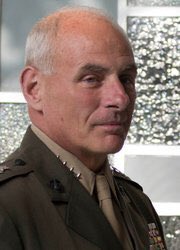 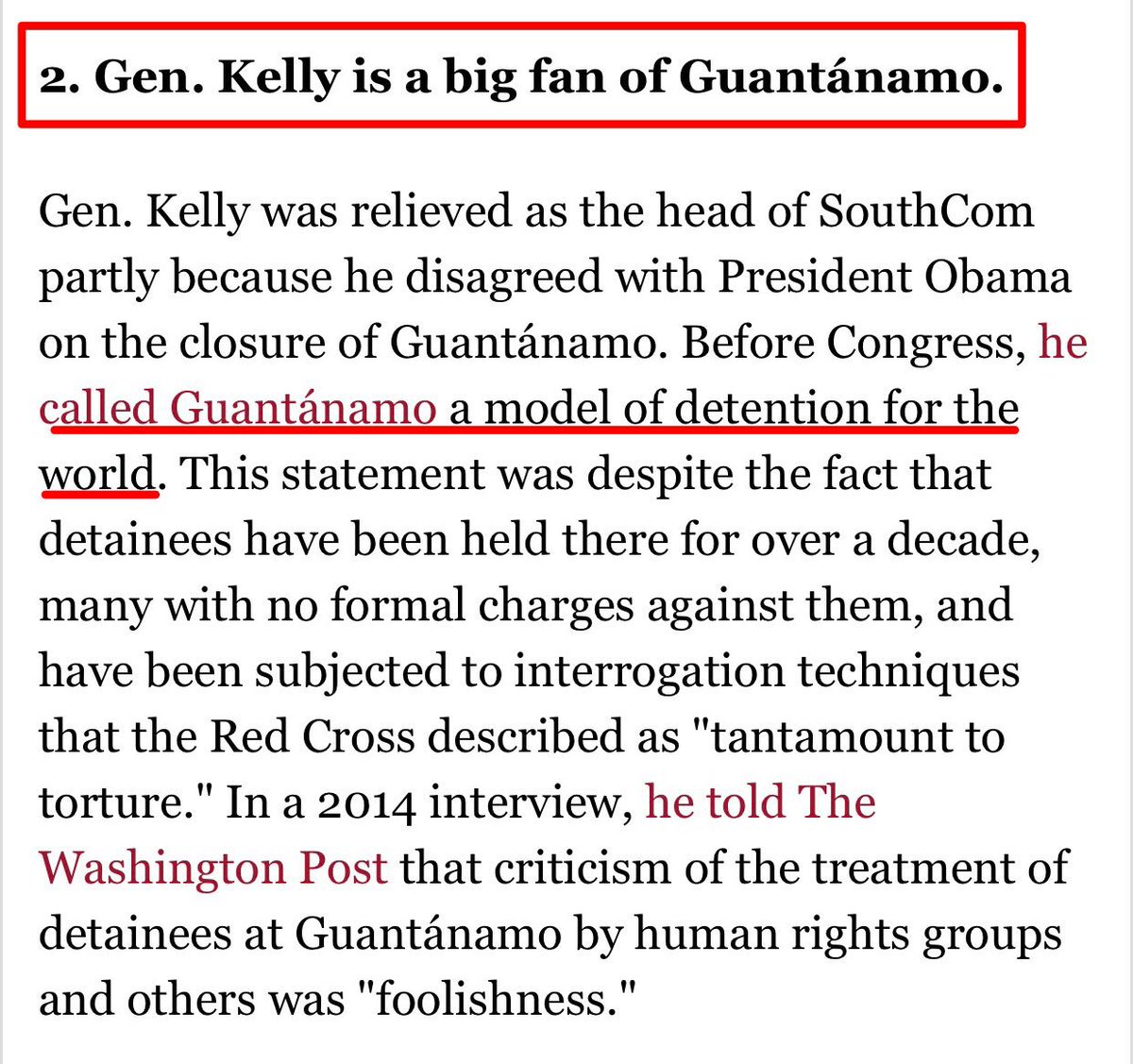 Steve Vladeck
@steve_vladeck
1. Later today, #SCOTUS will consider whether to review another major #GTMO mil. comm'n appeal (Al-Nashiri). Quick thread on why it matters:
2. Al-Nashiri is charged with, among other things, responsibility for 10/2000 bombing of USS Cole. But Cole bombing pre-dated 9/11...
3. Congress only allowed #GTMO mil. comm'ns to try offenses committed during "hostilities," i.e., "any conflict subject to the laws of war."
Read 11 tweets

Adam Schiff
@RepAdamSchiff
I welcome the President’s submission to Congress of a blueprint to finally shutter the prison at Guantanamo Bay. #GTMO
Continued operation of #GTMO damages our 'intnl standing, provides propaganda tool for terror & costs 100s of millions of dollars each year.
We have a proven and effective alternative in our federal courts, which have consistently disposed of our most serious terrorism cases.
Read 9 tweets