Discover and read the best of Twitter Threads about #newyearseve

a #MerryCrisis tribute thread in pictures ....

The Cutting Edge Ministries
@CuttingEdge_NG
You have come to a training season and a new day. You must understand the path of the wind in the spirit. It is time to fly and soar; you will soar with wings like an eagle.

#NewYearsEve
#WatchNight
#CrossOver
#2020NewYear
@PstTayo In your walk with God, it is time to fly, it is time to soar, your light has come and the glory of the Lord has risen upon you. The Lord is giving you the capacity to exceed your natural limits.

@PstTayo Say unto the barren, the time of your barrenness is over. Everything that is grounded will arise, it is time to arise and shine. There will be a constant download of the heart and mind of the Lord.

AJ+
@ajplus
11,017 people in Illinois with low-level marijuana convictions had their records expunged on #NewYearsEve.

Marijuana will be legal there starting January 1, and they're the first of ~116,000 people set to have their possession convictions pardoned under the new law.

Black people are over 3x more likely to be arrested for marijuana possession than white people, says an @ACLU study of 2001-10 policing.

In Illinois, the disparity was even higher (Black people were almost 8x more likely to be arrested).

According to the @ACLU:
- 574K arrests for drug possession in 2015 alone
- Black people 2.5x more likely to be arrested
- Convictions block people from jobs, loans + benefits

Prof Tanja Bueltmann
@cliodiaspora
On this day in 2009, as we were about to enter a new decade, I spent my first #NewYearsEve in the UK after moving here from New Zealand (where I did my PhD). I was just about to start a permanent role as Lecturer and was happy as, ready to make my forever home in this country.
Ten years later, as we are about to enter a new decade, I am spending my #NewYearsEve in Scotland, the place I know will always be my home even though Johnson said people like me, EU citizens, have treated the UK as our own country for too long.
EU citizens have been called queue-jumpers; we have been conflated with terrorists; been at the receiving end of hate for well over 3+ years. We all have to apply to stay in our home. As second class citizens. Will all this stop in 2020? I am sure it won’t. But this is our home.
Read 7 tweets

Big Boss
@escapedmatrix
If you’re out there thinking about how to make 2020 your best year, please consider giving people right around the corner from you in Flint, who have been left behind by those in power, the ability to drink clean water. Any donation helps. #NewYearNewFlint gofundme.com/f/SaveFlintCha…
Last day of the year & decade. Can you give the Flint #SaveFlintChallenge one last campaign boost. Humbly asking anyone reading this to make one final donation for 2019. #FlintWaterCrisis #NewYearNewFlint #NewYearNewWater #NewYearsEve #NewYear

In America, we don’t turn our backs on our neighbors when they need help. After watching everyone on social media forget about thousands of Americans struggling due to the water crisis, we decided to create our own campaign to help Flint. #SaveFlintChallenge #NewYearNewFlint
Read 23 tweets

Lindsey Fitzharris
@DrLindseyFitz
To Kick off 2020, I'll be tweeting 20 WEIRD & WONDERFUL OBJECTS FROM HISTORY, starting with #20: an 18th-century jeweled skeleton from the Waldsassen Basilika in Germany, the “Sistine Chapel of Death.” Photo by Paul Koudounaris's book Heavenly Bodies: amzn.to/2ZCUO9C

#19 of 20 WEIRD & WONDERFUL OBJECTS FROM HISTORY for 2020: a Victorian alarm clark which served as a “memento mori,” reminder of death. Perfect for tonight's #NewYearsEve countdown! It's currently housed at the
@sciencemuseum in London.

@sciencemuseum #18 of 20 WEIRD & WONDERFUL OBJECTS FROM HISTORY for 2020: a 440-pound heart from a blue whale, the largest known animal to ever exist. The heart was so large that technicians from @ROMtoronto had to douse it in over 1,000 gallons of formaldehyde before plastination could begin.

Big Boss
@escapedmatrix
Let 2020 be the year of raising our consciousness and focusing on being more human.
New Year's Eve is a time for both reflection and looking ahead. If you couldn't stop thinking about it in 2019, make it a reality in 2020. I hope your dreams and wishes come true this New Year.
Enjoy your New Year's!! Be safe!! Remember... be free of the past and start new. Best gift you can give yourself. #NewYearsEve #NewYear
Read 3 tweets

National Grid ESO
@ng_eso
Happy #NewYearsEve everybody! 2019 has been a record breaking year for GB electricity. Here's why...1/5

Wind supplied almost 44% of #electricity over the day as a whole.

3/5 ✅ Record number of #coal free days 🔥 - the longest period without burning coal to produce electricity since the Industrial Revolution! @PastCoal

Hundreds of Iraqis, shouting “Down, down USA!” attempt to storm the U.S. Embassy in Baghdad following U.S. airstrikes this week that killed dozens of members from an #Iran-backed militia in Iraq.

Damsycul
@damsycul
It’s almost the start of a new year and I want to advice that we all check our circles! If you can’t boast of one person that’ll massage your pain when life gives you a knock, you’re fucked! And I want to say this to my friends or whoever I’m involved with.
If I’m in anyway hindering you from moving ahead in life or reaching your full potential for any reason whatsoever, please cut me off. No harm no foul! I would do the same if I were you. Your own peace and happiness comes first.
Make sure whatever relationships you are having with people be it romantic, friendship or any kind of relationship at all add values to your life. Nobody has died of cutting off toxic and unbeneficial relationships.
Read 6 tweets

Rebecca Carman
@Bec_Carman
🔥The #bushfirecrisis in #Australia is no joke🔥

These arresting images are from residents of the small town of #Mallacoota at 10.30AM!!!! as they huddled on a wharf and watched flames come towards them from multiple fronts.

@GretaThunberg @AlexandriaV2005 @ClimateKristin @SameeraSavarala @EricHolthaus @MikeHudema @MichaelEMann @ap4ca @350Australia @GeraldKutney @KHayhoe #Mallacoota is a small town of about 4000 people in the state of #Victoria. There's one road in/out of town but no-one could use it to evacuate. Everyone was ordered to the town wharf to wait out the #bushfire, sitting ready in life jackets.

Sara A. Carter
@SaraCarterDC
Unbelievable...it’s #NewYearsEve You, along w James Clapper, @Comey and others have done more damage (according to sources) in the past few years to our nation’s foundation and security than anything @realDonaldTrump has said on Twitter. What about the unmaskings, leaking

Classified information, use of unverified intel from former British spy/Russians in a dossier to get a FISA to spy on Americans, lies told to Congress, handing Syria’s Chem weapons issue to Russia, not holding Hillary Clinton accountable, an FBI/CIA politicized.
Let’s lift our nation up - not tear it down from the inside out. Let’s start this New Year by supporting one another. I will keep investigating and hopefully there will be a resolution in the end - @realDonaldTrump declassify the docs (Transparency is key)
Read 3 tweets

Arsen Ostrovsky
@Ostrov_A
As 2018 draws to a close, I thought what better way to end this year than with 18 pictures of my favourite meals in #Israel.

Well, this is basically our national food after all!

2. This is what they call 'starters' here in Israel.

@USverdrup, Director at Norwegian Institute of International Affairs @NUPInytt noted to the 🇳🇴 @Aftenposten daily:
“If you stand at the edge
you no longer seek the best solution”
Please consider this:

#EFTA & the #EEA Agreement it administers
= a barren 🏜️ for #democracy

Lindsey Fitzharris
@DrLindseyFitz
I just hit 40K! Welcome followers, old & new. Over the next few days, I’ll be tweeting 40 FAVOURITE HISTORY OBJECTS, starting with #40: a medieval skull fused with chainmail. The soldier died at the Battle of Visby in 1361 in Gotland, Sweden. He was buried in his armour.

#39 in my 40 FAVOURITE HISTORY OBJECTS: the Beauchêne skull, or exploded skull. It’s a type of anatomical preparation invented by the French anatomist Claude Beauchêne in the 19th century. This stunning example was created by Ryan Matthew Cohn.

#38 of my 40 FAVOURITE HISTORY OBJECTS: the world's oldest complete example of a human with metastatic cancer. Researchers from Durham University & the British Museum discovered evidence of tumors in this 3,000-year-old skeleton found in the Sudan in 2013: livescience.com/44269-oldest-m…

We started the fund in collaboration with detained comrades in WTX and NM, who identified the need for a solidarity fund. Since January, we've posted over 50 bonds, made hundreds of $$ in commissary/phone payments, and supported families through bond hearings and release.

Grassroots fundraising and cmty volunteers allowed us to post nearly $300K in bonds this year, all without staff or overhead. We follow-up with people we bond out to help them navigate court dates and life outside detention.

HarperCollinsCa
@HarperCollinsCa
We're kicking off #NewYearsEve looking back on @neilhimself's New Years wishes. They span almost two decades, but we think they're as important as ever.
2001: "May your coming year be filled with magic and dreams and good madness. I hope you read some fine books and kiss someone who thinks you're wonderful, and don't forget to make some art -- write or draw or build or sing or live as only you can."
2008: "I hope you will have a wonderful year, that you'll dream dangerously and outrageously, that you'll make something that didn't exist before you made it, that you will be loved and that you will be liked, and that you will have people to love and to like in return.
Read 10 tweets 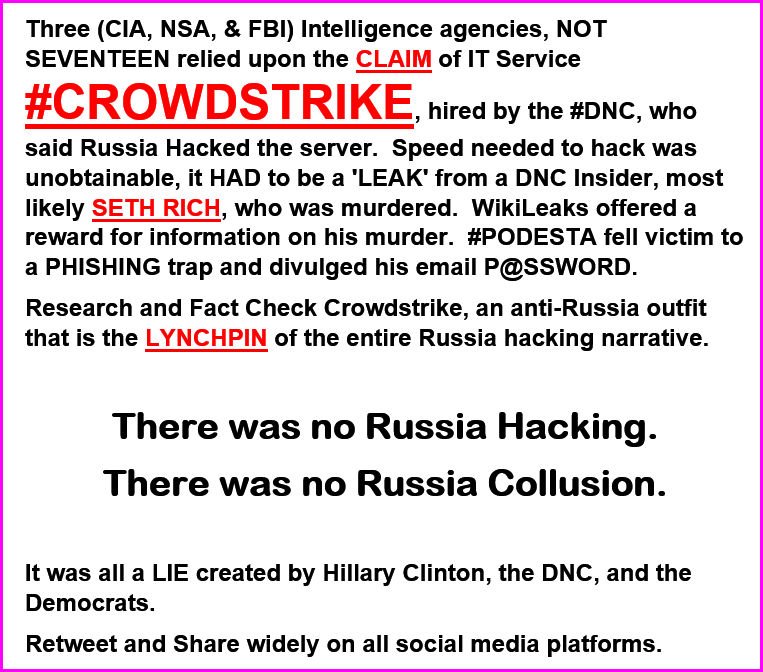 This ENDS the Russia Narrative, I DECREE it in Jesus' Name! #CrowdStrike #QAnon 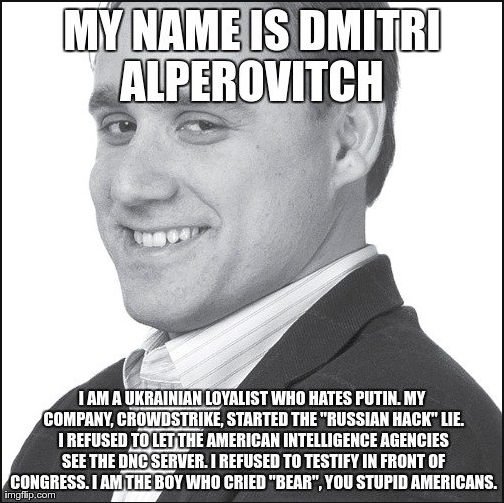