What's "Bab al-Rahma?"
In Hebrew known for 1000s of yrs as "Shaar HaRachamim" (or Golden Gate) thru which the Messiah will come, according to tradition.
The gate is sealed & an Arab cemetery placed there allegedly to keep the Messiah away. Pics inside Temple compound from 1800s:

3/ Here are pics taken from outside the city walls in 1800s in the area of the Muslim cemetery.
According to Jewish tradition, on Yom Kippur crowds on Mt of Olives could see into the Temple inside the walls.

4/ What's inside the sealed gates between the walls? Rare picture I found circa 1900 suggests that the room and/or columns date back to the Temple.
No wonder, the Wakf wants to build a mosque there between the walls

5/
The caption for the picture of the room inside the Golden Gate reads: "Interior of Golden Gate." Library of Congress, credit to the American Colony.
Now it gets weirder.
6/ The gate dates back to 7th/8th century CE, & it was built over an earlier gate. Jews visited inside from 11th century. Hebrew graffiti inside may date back to then. Read academic article (in Hebrew). ybz.org.il/_Uploads/dbsAt…

Get ready for really weird

7/ In 1969 an archeological student was inspecting outside gate when he fell into a deep pit w arches of an earlier gate. He also found he was in a pit of bones. Next day he returned & found cement slab laid by Muslim cemetery custodians.
Pics by student James Fleming & B.A.R.

8/End
My theory is the bones date back to 625 CE when a Jewish revolt aided the Persians vs the Byzantines.
Led by Benjamin of Tiberias, the Jews controlled the city for several yrs, possibly even restoring religious life on Temple ruins.
Bones? Everyone massacred everyone.
More info: israeldailypicture.com/2011/10/gates-…
n7qvc.wordpress.com/2011/02/17/the…

Now we know why the Muslims want it: so that the Jews can't have it.
Missing some Tweet in this thread?
You can try to force a refresh.
Tweet Share Email Embed

More from @lennybendavid see all

Lenny Ben-David
@lennybendavid
A Day, a Life: When a Medic Was Killed in #Gaza in June, Was It an Accident?
NYT's in-depth prosecution of #Israel. Only deep in article do we read:
"Three medics down, all from one bullet. It seemed improbable. But The Times’s reconstruction confirmed nyti.ms/2RmANCJ
2/ "The bullet hit the ground in front of the medics, then fragmented, part of it ricocheting upward & piercing Ms. Najjar’s chest. It was fired from a sand berm used by Israeli snipers at least 120 yards from where the medics fell."

Not a directed, intentional murder by sniper.
3/ The NYT's indictment of #IDF is 5,500 words long & accompanied by 17 minute video! When was the last time NYT spent so many manhours & millions of $ on an investigation?

Not since Warren Commission on JFK's assassination have I seen such research, stopped frames, diagrams.

Lenny Ben-David
@lennybendavid
Beer Sheva mother's called national hero. She woke to sirens in middle of night, ran upstairs to grab 3 sleeping kids from 3 bedrooms, ran downstairs & got all into bomb shelter & shut blastdoor just as rocket hit.
Commentators: had there been casualties, #Israel would be at war.
Her house was totaled. The woman, Miri Tamano, raising her 3 kids, is a divorcee who was laid off 6 months ago. With a BA and writing skills.
BTW, she's a Ethiopian Jew.
Here is picture of Miri Tamano who was interviewed on Israeli TV. She detailed her rescue of her 3 boys, the terror of the rocket hitting her house, telling her boys to hold their crying to to say from Psalms "Give thanks to God for He is good, for His goodness endured forever"

Sonia Mota
@SoniaKatiMota
From the beginning, Zionists advocated a "Jewish State" not just in #Palestine, but also in #Jordan, southern #Lebanon, and the #GolanHeights as well.
As it will be proved from the quotes below:
#ICC4Israel #EthnicCleaning #Occupation #BDS #Gaza
Source:palestineremembered.com/Acre/Famous-Zi…👈

“We must expel the Arabs and take their places…”~#DavidBenGurion
Born in 1886 as David Green (Gruen) in Plonsk, #Poland. He is considered one of the three founding figures of Zionism beside #ChaimWeizmann & #Herzl.
#ICC4Israel #BDS #Palestine #Gaza
palestineremembered.com/Acre/Famous-Zi…👈

The first target of the campaign against opponents will probably be the el #Lajat plateau , which threatens the supply line to the #SAA controlled #Dara city.

Matthew RJ Brodsky
@RJBrodsky
Just to state the obvious: This is largest confrontation between #Israel and #Syria since 1973; the first time #Iran and the IRGC themselves launched missiles at #Israel. Expect even more.
With all the targeting in Damascus #Syria, expect #Israel to go after the main IRGC headquarters near the Damascus Airport. Around 1,000 IRGC tend to be stationed there, along with senior leadership.
Suggestion: If you thought what the US did in response to the April CW attack in #Syria was strong, fasten your seat belts.
Read 24 tweets

Thomas Binder
@Thomas_Binder
After 70 years of imperial/neoliberal indoctrination the web of lies is so obviously absurde (9/11, Skripal, WH = ISIS, etc.), that it is dissoluting. The empathetic humanity connects, closes ranks and sends their eternal psychopathic rulers and their lackeys into nowhere land.

The "evil empire" is a lifelong three year old child. I certainly loved my children at that age too, however only because they created not only a surreal mess, but also made steady progress.

A great documentary about psychopathy and society:

The elite invented "democracy" to protect them from the empathetic people. The media are their means for misleading the people sedated by "democracy". This is definitely a bad thing since the people have become educated and the elite almost totally insane.

Benjamin Weingarten
@bhweingarten
A recent Pew poll indicates a staggering divergence in views on #Israel vs the Arabs of Palestine between Republicans and Democrats in America. Increasingly, Israel is becoming a one-party, Republican, issue. How and why did this happen? THREAD city-journal.org/html/israel-pa… 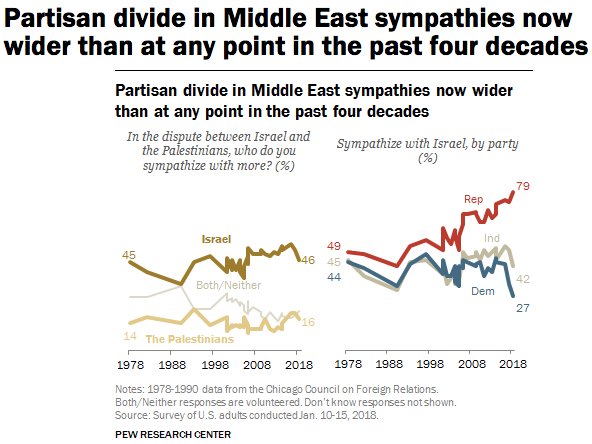 The largely Democratic American Jewish political establishment argues the Trump admin through its #Jerusalem capital recognition/embassy move decisions and beyond are cynically acting as staunchly pro-#Israel, "politicizing" the issue. Pew says otherwise city-journal.org/html/israel-pa…
According to the Pew poll on American views on #Israel vs. Arabs of Palestine, not just conservatives, but every group of American voters surveyed supports Israel over the Palestinians by a wide margin—with the single exception of “liberal Democrats.” city-journal.org/html/israel-pa… 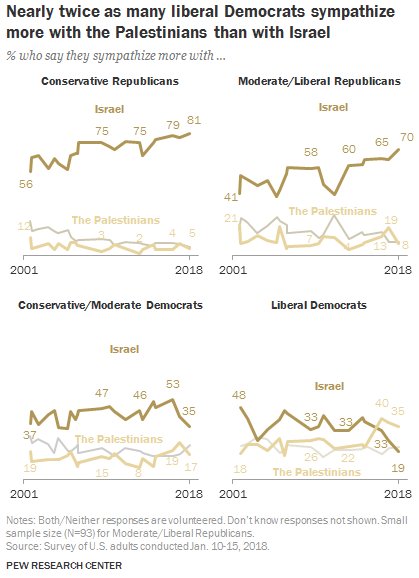 Israel Genocide?
@IsraelGenocide
1- Thread: Why should you join over 4000 people who believe #Israel may be committing #genocide against the indigenous #Palestinian people?
israelgenocide.com/take-action/